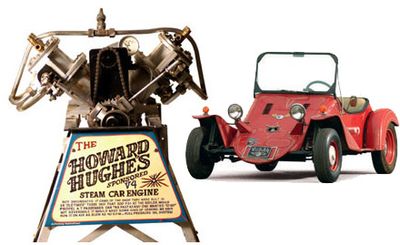 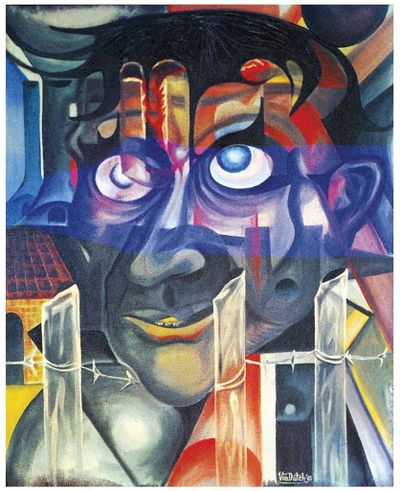 A Von Dutch self-portrait from 1965. This is one of Von Dutch's most expressive pieces, and it is often considered his first self-portrait, Goodbye Cruel World being his second. Being oil on board, the piece was produced while Dutch and his family were living in Reseda, California. The famous painting was par of The Brucker Collection auction in 2006 where it sold for US $92,000.[1] Photo courtesy of RM Sotheby's.

The Largest private collection of Von Dutch, Ed "Big Daddy" Roth and Robert Williams will be up for sale by RM Auctions' Pop Culture Division.

The Pop Culture Division’s calendar of upcoming sales includes an incredible cache of more than 500 pieces of Kustom Kulture artwork and memorabilia. Stored for years in the airplane hangars and warehouses of the Brucker Brothers, who acted as both patrons and custodians of this amazing artwork, the collection contains many of the 20th Century’s most influential Kustom Kulture artists including Von Dutch, Ed “Big Daddy” Roth, Robert Williams, David Mann and Ed Newton.

The sale, scheduled for May 13-14, 2006, at the Petersen Automotive Museum in Los Angeles, will mark the first time this original artwork and memorabilia has been offered for public sale. The magnificent offering will be on display at the Petersen Automotive Museum during the weeks leading up to the Saturday and Sunday auction. The name Von Dutch has become an international icon, but the man behind the name is one of the most influential and enigmatic artists of the twentieth century. The Brucker Brothers’ Kustom Kulture Collection will feature some of the most important pieces of Von Dutch memorabilia ever offered for sale. One such piece is the actual paint box carried by both Von Dutch and his father throughout their legendary careers. In addition to numerous lots of Von Dutch memorabilia the sale will also highlight original works of art by the founding fathers of Kustom Kulture, consisting of Ed “Big Daddy” Roth, Ed Newton, David Mann, S. Clay Wilson and Robert Williams. Roth, best known for his grotesque caricatures typified by “Rat Fink”, was employed by the Bruckers for a number of years at the MovieWorld: Cars of the Stars Museum in Buena Park, California. Upon the closure of MovieWorld, The Bruckers purchased the remaining Roth Studio artwork, which features a variety original drawings and sketches for cars, models, decals and characters such as Rat Fink’s Revenge.

Robert Williams, a famed and controversial painter and Editor of Juxtapoz Art & Culture Magazine, is wonderfully represented in the collection as well, with a number important paintings including one of the most prolific pieces, “In the Land of Retinal Delights,” from 1968. The sale will also feature a variety of automobiles from the MovieWorld Museum itself such as the famed “Topper” Car, which shared the silver screen with Cary Grant in the 1936 film “Topper” and then began its second life as the Gilmore Oil Special. “With the growing number of people interested in selling rare specialty items or entire collections, we felt the need to create a separate division to address this specific auction segment,” says Rob Myers of RM Auctions. “This type of auction, like the highly successful three-day model train and collectibles event we conducted on behalf of Richard Kughn’s Carail Museum, requires specialized knowledge regarding collectibles and an awareness of customers’ and families’ needs.”

Please get in touch with us at mail@kustomrama.com if you have additional information or photos to share about The Brucker Collection.