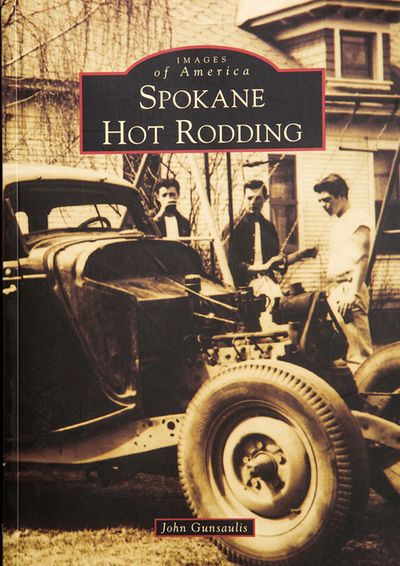 Spokane is the largest city in Eastern Washington. In the 1940s it became a center point of an evolving postwar hot rod community. According to Gunsaulis, local car enthusiasts joined together with an influx of military personnel and college students who were just as passionate about hot rodding, "and it was during this time that the Spokane hot rodding culture started flourishing. Together, they pushed the boundaries of hot rodding and created lifelong bonds in the process. This book explores that evolution of inland northwest hot rodding from the mid-1940s to the mid-1960s, starting with the jalopy-styled hot rods that began popping up on local streets to the formation of new clubs and organized racing."

John Gunsaulis is a second-generation Spokane hot rodder and show car devotee. His passion for traditional cars was heavily influenced by local hot rodders and his father, Richard "Speedy" Gunsaulis. "Spokane Hot Rodding" is filled with black and white photos. Images John has collected from the scrapbooks and garage walls that spawned his dedication to early hot rods. The first photo in chapter one is a photo of Harry Prouty's 1931 Ford Model A custom. Taken in 1946, the car has been dressed up with a 1933 - 1934 Ford truck grille, Hollywood hubcaps, and fender skirts. A couple more mild customs and hot rods follow before John introduces us to Tim Rochlitzer. Tim was a young kid from Santa Barbara, California, who in 1950 came to Spokane to study mechanical engineering. Tim came to town in a 1949 Ford custom that featured custom bodywork by the Ayala Brothers, a Carson Top, and Gaylord custom upholstery. A beautiful custom that I'm sure had an impact on the custom car scene in town. Tim's Shoebox Ford wasn't the only Ayala Custom in town. Dusty Rhodes was a local hero that drove his 1947 Mercury Convertible to Southern California to have Gil Ayala chop it. I could go on and on, but I highly recommend you all to get the full story in Gunsaulis' book. On Amazon, the book is available as a hardcover or softcover book. You can also buy it digitally and download it to your Kindle device or app.

Please get in touch with us at mail@kustomrama.com if you have additional information or photos to share about Spokane Hot Rodding.