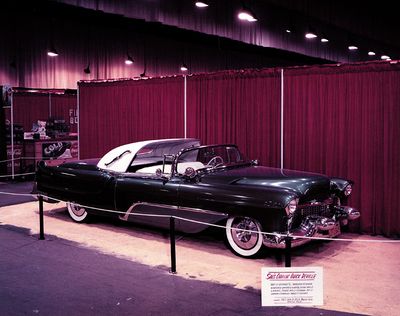 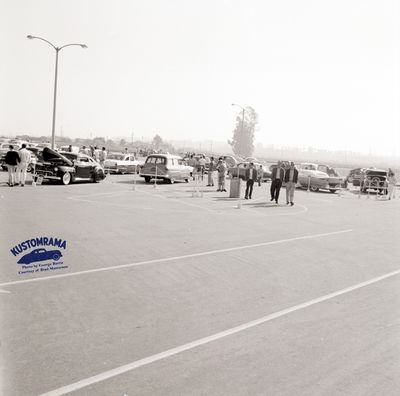 1954 Buick Roadmaster Riviera convertible built by Gaylord's Kustom Shop for Sal Mammano of Downey, California. Not much reveals that this Custom once was a Buick. The car was a massive project for Gaylord that involved both channeling and sectioning. When sal handed over the car, it had been involved in a traffic accident, causing it to roll over. The body was sectioned 3 1/2 inches and since the front was wrecked, a new front clip from a 1954 Cadillac was installed. The bumper bullets were not Cadillac, but were spun from sheet stock. 1956 Cadillac rear fenders were spliced to the Buick body to achieve a longer and sleeker appearance. The windshield was chopped and slanted, Gaylord fabricated a padded overhang top which was installed. The headlights were extended and a custom grille with machine openings was made out of pressed steel. Hood scoops were made to make to hood look lower. Custom side trims were installed. The wheel openings were reshaped and custom hubcaps made upon 1953 Cadillac sombreros were added. A new padded roof made by fiberglass was fit to the car, the top featured Landau irons and an open section over the front seat. Sal was a hair dresser and owner of Sal's Casa Di Bella Beauty Salon in Downey, California. He used the Buick as a promotional vehicle and showed it at Los Angeles area car shows.[1]

Please get in touch with us at mail@kustomrama.com if you have additional information or photos to share about Sal Mammano's 1954 Buick.