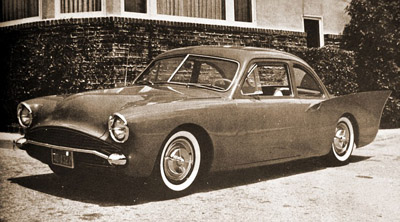 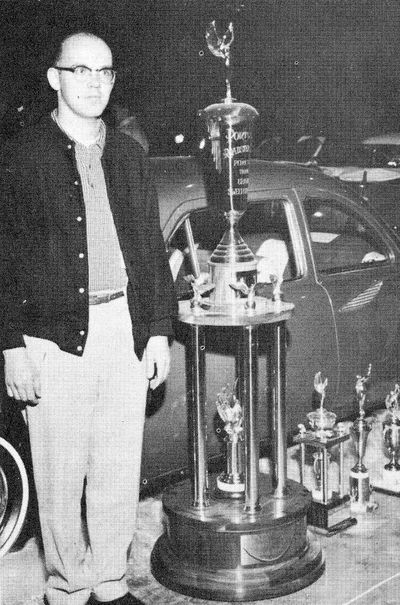 A stunned Ron with all of the trophies he won with theX-51 at the 1957 Portland Roadster Show. Photo courtesy of Northwest Rods. 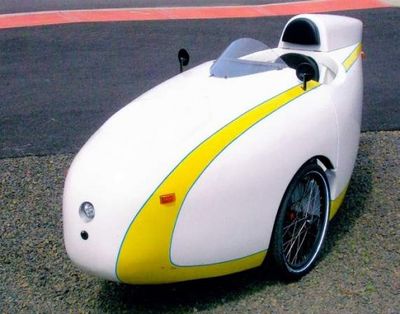 A photo of the Velomobile Ron built between 2007 and 200. Photo courtesy of Velo Circus. 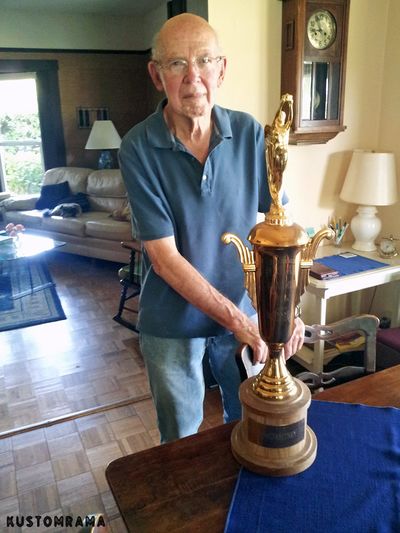 Ron at his home in 2015 with the top of the traveling trophy he won with the X-51 at the 1957 Portland Roadster Show. Photo by Ruben Contreras, Jr. - Dragging the Gut Festival.

Ron Courtney of McMinnville, Oregon. Ron learned body repair work at Eugene Vocational School. He went on to work for Bennett Motor Co., the Nash dealer in McMinnville, before he was lured away by the Chevrolet dealer, Fredericks Motor Co. at Third and Galloway. In 2011 Ron told Karl Klooster at KVAL.com how that happened; "I was customizing a 1951 Ford coupe at Bennett's when the Fredericks people offered me the job. I told them I'd come to work for them if I could keep the car there and they'd let me finish it up in my spare time." They agreed, and Ron stayed with Frederick for 28 years. Ron's radically restyled Ford was completed in 1956, and it gained national recognition as the X-51, being featured in national magazines. The X-51 did also make an appearance on a Portland TV show for teens.[1] According to Al Peirish, the X-51 was the only custom car Ron ever built.[2] While at Fredericks, and even during the last 10 years of his career, when he worked for McMinnville Auto Body, Courtney did custom body work for clients. The largest of his do-it-yourself projects, however, involved an entirely different type of transportation. In 1970, he bought a 36-foot sailboat hull in Portland and, over the next four years, did everything else himself. The decking, rigging, mast, cabin interior, cockpit, steering, instrumentation, engine compartment and power train assembly — you name it, he built or installed it. In 1974, he and his wife, Donna, quit their jobs, took their two daughters out of school for a year and sailed around the Pacific. "We set sail from the Rose City Yacht Club, went out the Columbia and down the coast to Puerto Vallarta," he told Karl Klooster.[1]

Ron retired in 1994, after 42 years in the auto body repair business. In 2007 he began building a three-wheeled electric vehicle kit called the Velomobile. The build was completed in 2009. From the front it appeared to be shaped like a bullet. It could be human or motor-powered, or a combination of both. It had an electric motor capable of delivering about a 40-mile range. In 2011 he began building another Velomobile, incorporating some different ideas into the design.[1]

In 2015 Ron was honored by having an annual trophy named for him at the Dragging the Gut Festival in McMinnville.[3]

Please get in touch with us at mail@kustomrama.com if you have additional information or photos to share about Ron Courtney.