From Kustomrama
(Redirected from Al Peirish)
Jump to: navigation, search 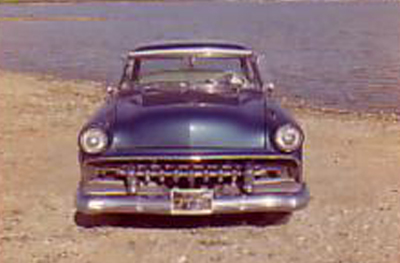 Al Peirish's 1954 Ford Skyliner was restyled by Don Roberts of Bear Custom Shop in 1962. Al's Skyliner was one of the last customs to come out of Don's shop. Don kept it for three year, before seliing it in 1965. 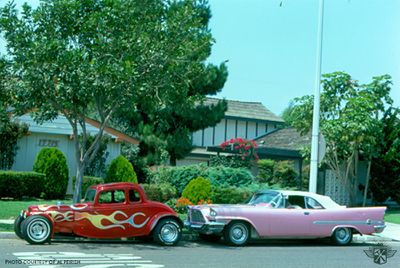 Alfred Peirish of Inglewood, California. In high school, Al and two friend started a small club named the Marodders. The club lasted for two years. When the members graduated from high school and went separate ways the club was dissolved.

In the late 1950s and early 1960s Al used to hang out at Don Roberts' Bear Custom Shop, watching cars come in and out, receiving custom body work. Al started hanging out at the shop at age 19, while attending college. He was enamored by the cars he saw at Don's shop, and in 1962 he had Don restyle his 1954 Ford Skyliner. As far as Al know, this was one of the last cars Don customized in his shop. Around 1964 Al did some mild damage to one of the fenders on the car. By then Don Roberts had turned the shop over to his son. The son had closed it down and enlisted in the US Air Force. Al was able to locate Don, who was working out of a small body shop in El Segundo, and he fixed the car for Al in his off hours.

In October of 1964, Al entered the US Air Force, and he moved from Inglewood. In 1965, after putting 70,000 miles on the car, Al sold the Skyliner and bought a 1957 Chrysler 300 Convertible. Al customized the Chrysler by painting it Pink Pearl and by installing a custom white and pink upholstery.

in 1978 Al moved to McMinnville, Oregon. Shortly after Al arrived, he met a fellow at a local cruise-in. The fellow, named Bob, was by far McMinneville's foremost custom car builder. Bob lived a low profile lifestyle in relative obscurity. His most famous build was a home built sport custom that won Best of Show at the Portland Roadster Show in 1958 and 1959. It did also land the cover of Rod & Custom October 1959. That car is still in existence, locked away in a barn.

In 2012 Al was still living in McMinnville. By then he still had his Marodders club jacket. He was still in touch with the other two founding members of the club, and they had lost track of their jackets a long time ago.

Please get in touch with us at mail@kustomrama.com if you have additional information or photos to share about Alfred J. Peirish.