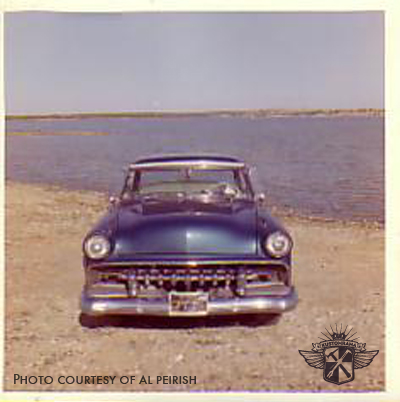 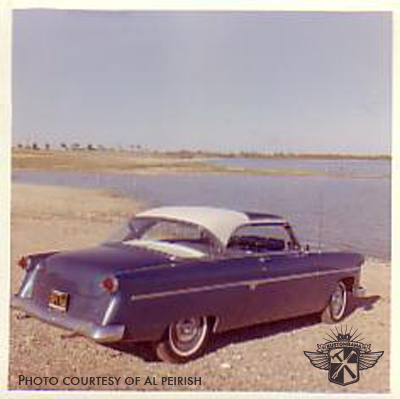 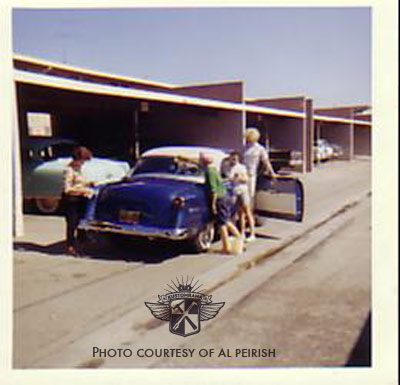 Al's Skyliner in 1962, shortly after Don had restyled it. The photo was taken at the apartment complex where Al lived. Photo courtesy of Al Peirish.

1954 Ford Skyliner restyled by Don Roberts of Bear Custom Shop for Marodders member Al Peirish of Inglewood, California. After Don moved his shop to Inglewood in the late 1950s, Al started to hang around the shop watching Don customize cars. He was a 19 years old college student at the time, and he was very enamored by the cars he saw come in and out of the shop. Al brought his Skyliner to Don in the spring of 1962 for some body-repair and customizing. Don nosed, decked, and removed the side-trim on the rear quarter panels for Al. 1960 Imperial taillights were also added before Don painted it Candy Blue with a White Pearl top. Al believes his Ford was the first Skyliner to ever be fit with 1960 Imperial taillights. The build was completed early in the summer the same year. Later on Al replaced the stock grille with a 1954 DeSoto grille.[1]

Around 1964 Al did some mild damage to one of the fenders on the car. By then Don Roberts had turned the shop over to his son. The son had closed it down and enlisted in the US Air Force. Al was able to locate Don, who was working out of a small body shop in El Segundo, and he fixed the car for Al in his off hours. In October of 1964, Al entered the US Air Force, and he moved from Inglewood. During the years 1962-1965 Al traveled across the US on Route 66 a total of eight times, between Pittsburgh, Pennsylvania and Los Angeles, California. Three years and over 70,000 miles later, the paint was losing it's brightness. After a year in the hot Texas sun, Al decided to sell off the old custom and buy a 1957 Chrysler 300C Converible.[1]

Please get in touch with us at mail@kustomrama.com if you have additional information or photos to share about Al Peirish's 1954 Ford.