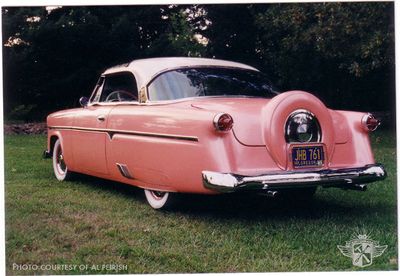 The first version of Al's second Skyliner featured a Coronado Kit that was welded to the deck lid. Photo by Al Peirish. 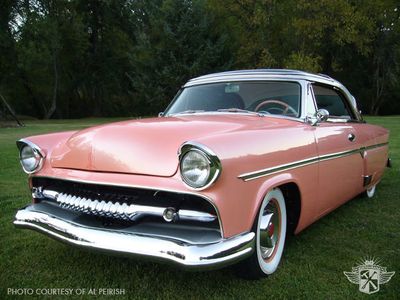 Al's Skyliner as it appeared in 2012. Photo by Al Peirish. 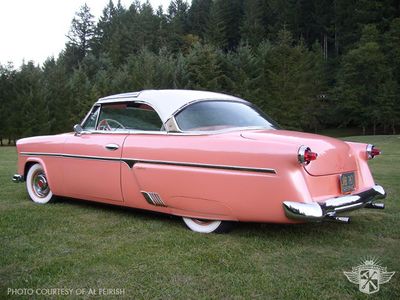 1954 Ford Skyliner owned and restyled by Al Peirish of McMinnville, Oregon. In 1962 Al had Don Roberts of Bear Custom Shop in Inglewood restyle a 1954 Ford Skyliner for him. He sold the car in 1965, and decided around 2002 to build another one. This time Al did all of the work himself, from designing, to welding, body work, painting, right down to the pinstriping. As his first Skyliner, this one was also nosed, decked, and fit with Al's trademark 1960 Imperial taillights. The stock grille was replaced by a grillebar made from three different cars. The main bar was a 1953 Holden bar that he stretched by adding extra teeth to fill the Ford cavity. Turn indicators made from modified 1969 VW Squareback taillight bezels were made to fit the grille bar. The lights are back-up lights from a 1964 Ford Galaxy that Al machined and trimmed to fit the housings. 1957 Oldsmobile headlights were installed, and the front fenders had to be extended and widene to accomodate the installation. The fender skirts were hand made by Al. A deck lid with a Coronado Kit was welded and leaded to make it look like a one piece factory original. As some of Al' car buddies scoffed at it, Al decided to take it off again years ago. The deck lid is now hanging in Al's garage.[1]

Please get in touch with us at mail@kustomrama.com if you have additional information or photos to share about Al Peirish's Second 1954 Ford.