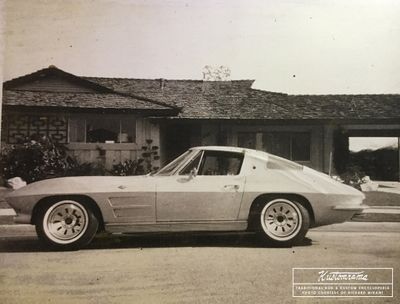 An early photo of Froggie's Corvette taken before he installed hydraulic lifts. The car was silver with a black interior, and Richard bought it from the used car lot at Harry Mann Chevrolet in 1966. Photo courtesy of Richard Mikami. 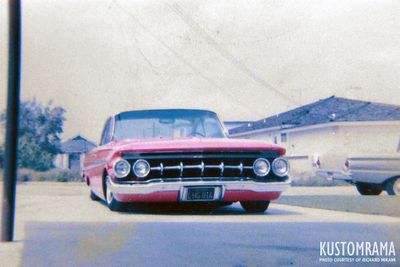 A photo of Froggie's 1961 Chevrolet Impala. Bill Hines installed hydraulic lifts on the car circa 1964-65, and the car was so low that it became known as the Ant Killer. Photo courtesy of Richard Mikami. 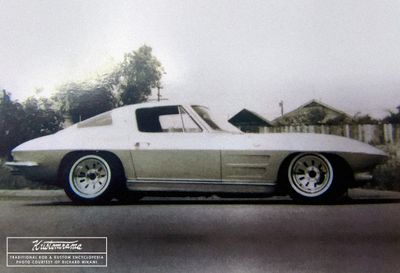 A photo of Froggie's Corvette taken circa 1966. After totaling the Impala in 1965, Richard salvaged the Adel pump and cylinders and installed them in the Stingray. Photo courtesy of Richard Mikami. 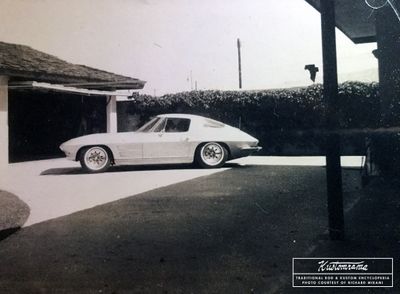 Another photo of the Corvette taken after Froggie had installed lifts. "In this photo, the car is not all the way down in the front," Froggie told Sondre. Photo courtesy of Richard Mikami. 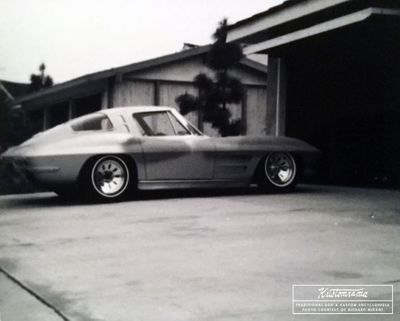 Froggie removed the badges and door handles and installed buttons under the rocker panels and inside the center console. Photo courtesy of Richard Mikami. 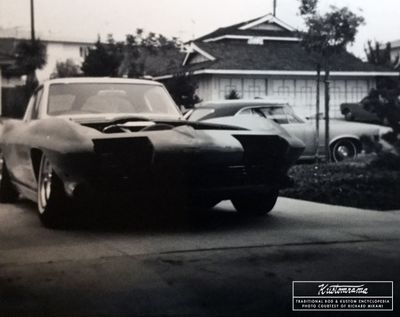 He never finished the build and ended up trading it for a Black 1958 Cadillac Eldorado Brougham circa 1968. Photo courtesy of Richard Mikami.

1963 Chevrolet Corvette Stingray Split Window owned by Richard "Froggie" Mikami of Gardena, California. Froggie's Corvette was silver metallic with a black interior, and he bought it from the used car lot at Harry Mann Chevrolet in 1966.[1]

The car received hydraulic lifts in 1966, after Froggie totaled his 1961 Chevrolet. "I pulled out all the hydraulic lift parts including the Adel pump, cylinder, hoses and switch," Froggie told Sondre Kvipt of Kustomrama in 2019. He set all the parts aside and later installed them himself in the Corvette. Froggie installed the hydraulics the same way as Bill Hines had installed them in his 1961 Chevrolet. "It was different than any other installation I've seen," Froggie recalled. "The Adel pump was installed in front of the radiator. It was a single 12-volt battery and the cylinder hoses were run off the lower A-frames. That kept the engine compartment looking unaltered from the installation of lifts. The hoses were tucked away from road hazards and hydraulic parts were out of sight." No cutting was involved in the operation. " I either forgot or didn’t think it was necessary to install the one way valve and the ATF fluid I used as hydraulic fluid was running in both directions, the consequences being that the split window coupe wouldn’t stay up, so I drove the car to a guy's shop that was big in the South Bay for installing hydraulic, his name was Red, he told me what I needed to know."[1]

Froggie remembers that hydraulic lifts installed in cars was a new thing back in 1965 when the Ant Killer was alive and well, "and the lifts were only installed on the front end and not on the rear. I would pull out the rear coil springs to give the car a slammed look. The Corvette had hydraulic in the front and I wanted to install lifts to the rear, but never could, the rear suspension was a single transverse leaf spring and it was lowered by relaxing the spring with long hardened bolts at the attached ends of the transverse leaf spring."[1]

"This was a fun ride," Froggie told Kustomrama. It was powered by a 327 engine with a Powerglide transmission. He later had the badges and door handles removed and installed buttons under the rocker panels and inside the center console. He never finished the build, and ended up trading it for a Black 1958 Cadillac Eldorado Brougham circa 1968.[1]

Please get in touch with us at mail@kustomrama.com if you have additional information or photos to share about Richard Mikami's 1963 Chevrolet Corvette Stingray Split Window.