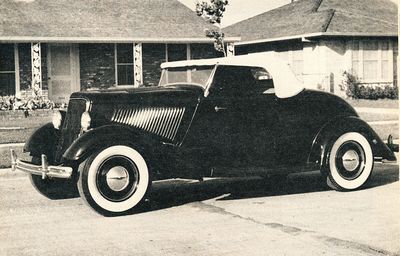 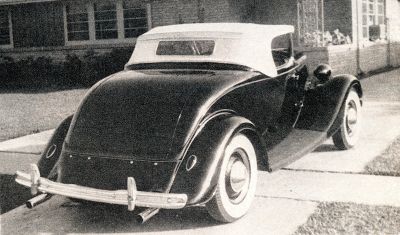 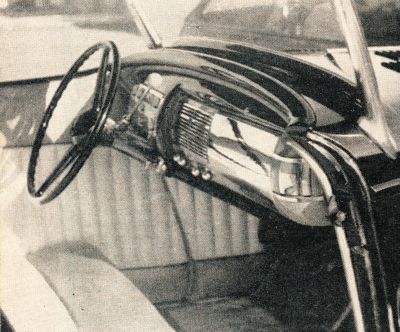 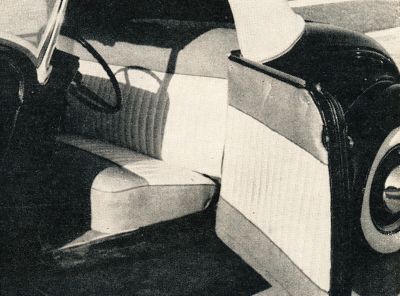 The interior was done in a two-tone tan and ivory leatherette, padded and ribbed with a matching carpet. 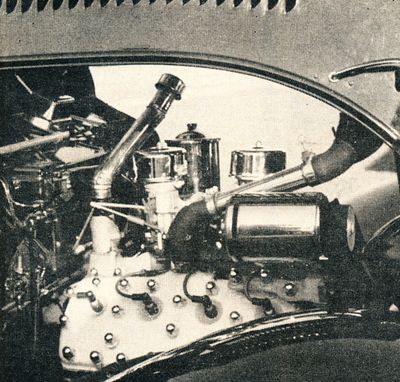 The engine was hopped up with a D & S dual intake manifold, 91 carbs, bonnet air cleaners and milled heads filled to 9-1 compression. 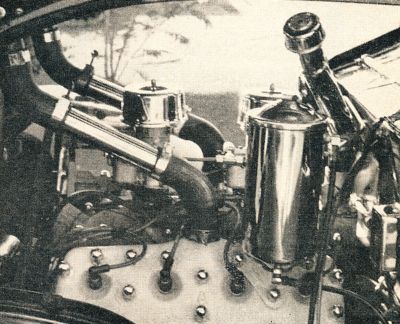 1934 Ford Roadster owned and built by Mike Tomforde of Houston, Texas. Mike's clean roadster painted 20 coats of black lacquer, which was then sanded and hand rubbed. The spare tire was removed, and a set of 1941 Ford station wagon bumpers were installed. The taillights were from a 1939 Ford, and up front a set seal beams were installed. The windshield was chopped, and a nice white padded top was made to fit the new height of the windshield. Chrome fender welt was mounted, and the radiator shell was leaded-in. 4 rows of louvers were punched into the hood as well. A dashboard from a 1940 Ford DeLuxe was trimmed to fit, and partially chromed and fit with 1949 Ford dash knobs. The column shift originated from a 1940 Ford as well, hooked on to a 1941 Lincoln transmission. The interior was done in a two-tone tan and ivory leatherette, padded and ribbed with a matching carpet. Dual exhaust was made, featuring Porter 17" mufflers. The rear end was fit with 3.54 gears. Kinmont disc hydraulics and 1940 Ford rims were installed. Power was supplied with the help of a 1941 Mercury engine, which was ported, relieved and balanced. It was also hopped up with a D & S dual intake manifold, 91 carbs, bonnet air cleaners, milled heads filled to 9-1 compression, JE Pistons, Grant rings, Harman & Collins full race cam, W & H ignition, and a 12-pound flywheel.[1]

Please get in touch with us at mail@kustomrama.com if you have additional information or photos to share about Mike Tomforde's 1934 Ford.