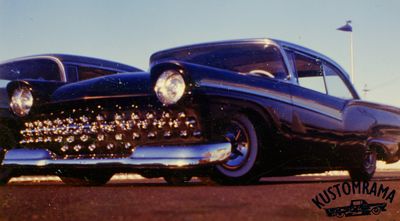 Jack's Ford as it appeared after Gene Winfield had restyled it. Photo courtesy of Steve Smario. 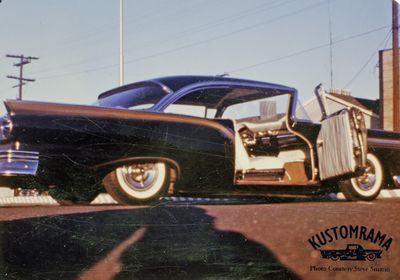 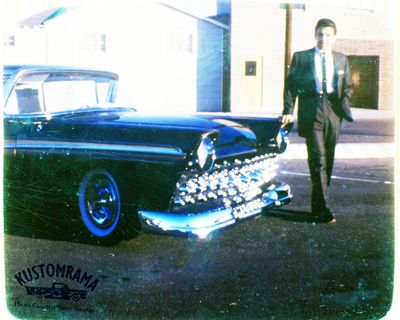 A photo of Jack with his Ford. Photo courtesy of Steve Smario. 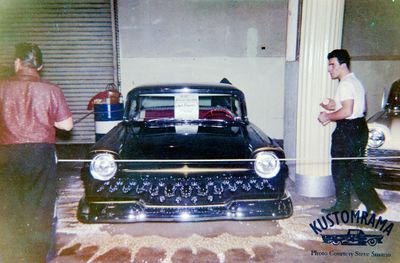 Jack's Ford at the indoor car show that the listing above comes from. Photo courtesy of Steve Smario. 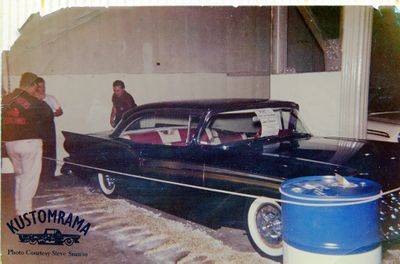 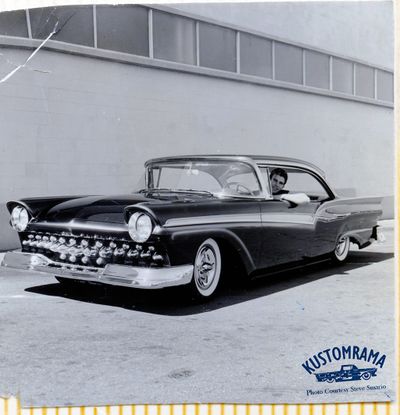 A photo of Jack with the Ford from the Frank Faraone photo session. Photo courtesy of Steve Smario. 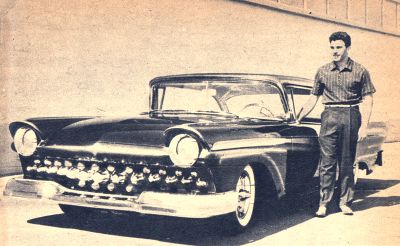 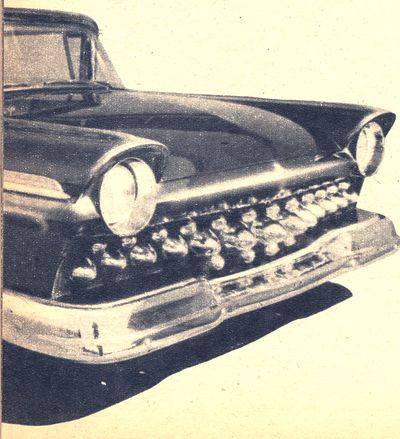 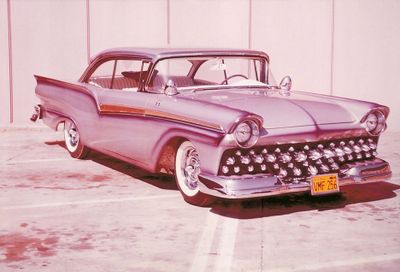 A photo of the Ford as it appeared after Mike Malfatano had bought it and brought it back to Gene Winfield for a makeover.

1957 Ford 2-door hardtop restyled by Gene Winfield of Winfield's Custom Shop for Jack Smario of Pittsburg, California. Jack was the owner of a men's clothing store, and his mildly restyled Ford received a new front end appearance by frenching and tunneling the headlights. The headlights were tunneled 4 inches and featured a specially made chrome ring. A custom grille, similar to the one Gene installed on Mike Malfatano's 1957 Ford, was composed by various sized chrome bullets mounted on mesh screen. The bumper was filled and the hood and decklid were shaved. Gene also removed the door handles on the car, and the doors and trunk were operated electronically. In the rear, Gene fit the car with custom made taillights. He tunneled the lens, and mounted it behind a mesh screen featuring a chromed bullet in the center. According to Custom Cars February 1960, the body was channeled 12 inches over the frame. It was also lowered additionally by stepping the A frames up front and by C'ing the frame. The springs in the rear were also de-arched.[1] According to Bob Renteria, who went to high school with Jack, the car was not channeled.[2] Once the bodywork was completed, Gene painted the car in a black lacquer with gold build in blended scallops around the chrome, a new type of blending process that gave it a gold dust effect.[3] It was dressed up featuring custom drag pipes. dual spotlights, and reworked 1959 Dodge Lancer hubcaps.[4]

Jack sold the car to Mike Malfatano of Pittsburg, California. Mike's family owned a construction company in Pittsburg. Mike took the car back to Winfield's Custom Shop to add sunken antennas. The antennas were were placed on the front fenders next to the headlamps facing forward. The antennas actuated the door solenoids. After the antennas were mounted, the car was painted Silver Metalflake with purple faded scallops, similar to the previous paint job.[2] In January of 1962, this version was shown by Jack at the 7th San Mateo Custom, Rod & Sports Car Show. According to the souvenir program from the show, the car featured bucket seats and a built in phonograph and bar.[5]

Please get in touch with us at mail@kustomrama.com if you have additional information or photos to share about Jack Smario's 1957 Ford.