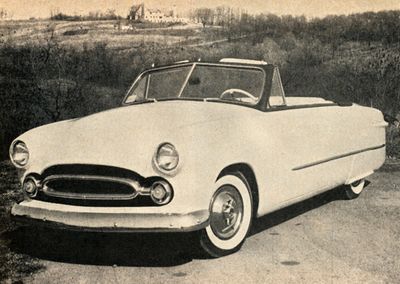 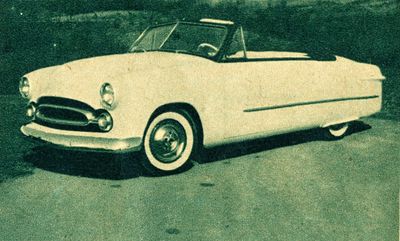 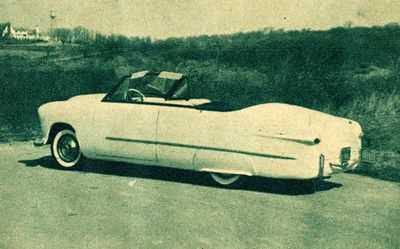 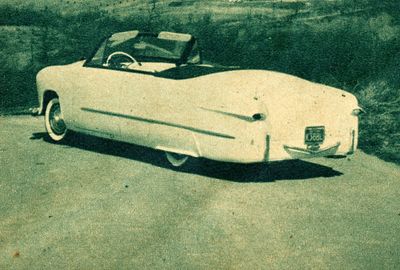 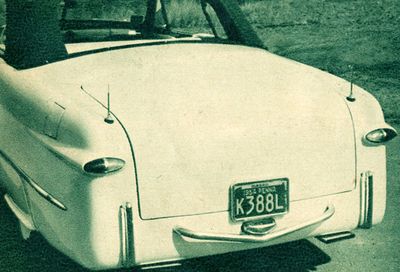 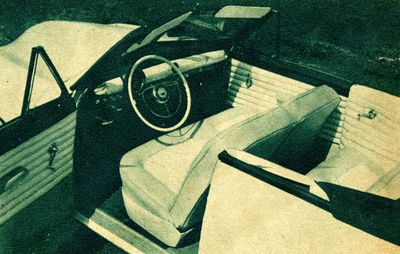 1950 Ford Convertible restyled by Vaun Hamlin of Hamlin's Body Shop for Melvin D'Loss of Bridgeville, Pennsylvania. Melvin wanted to make a custom out of his convertible; the only problem was that he was called to overseas duty by Uncle Sam. Before leaving he brought the car to Hamlin's Body Shop with orders for it to go under the torch. Vaun and Melvin exchanged letters while Melvin was away, discussing restyling ideas.

The front of the hood on the car was air hammered and the grille cavity was reshaped to make room for a Packard grille. The seam dividing the hood halves was filled and the headlights were frenched using 1952 Ford headlight rims. The door handles were shaved and waterproof pushbuttons were integrated into 1955 Ford side trim. The inner door handles were removed as well and pushbuttons installed on the dashboard. The rear end of the car was extended 8 inches by cutting the entire body off with the parting line running from the fenders and across the panel that separates the deck lid from the rear of the cockpit. Another 1950 Ford convertible body was identically halved, but the upper cut this time ran close the cockpit edge. The chassis had to be extended by moving the frame horns and rear body crossmember further back. The deck lid was filled in and the latches were converted to 1953 Ford hinges located inside the trunk. The deck lid was operated from a pushbutton on the dash as well. The rear bumper was discarded and a new metal pan was formed and added to the body beneath the deck lid. The rear end was protected from following motorists by vertical Nerf bars securely mounted to custom made brackets. The brackets were bolted to the frame horns. A Nerf bar with a slight downward dip in its center was installed along with dual aerials. A set of 1954 Chevrolet taillights were frenched into the fenders by using a ring of steel to support the edges of the opening. The lenses were positioned from inside the trunk. Hamlin lowered the car 2 inches both fore and aft. The front was lowered by welding links to the outer end of the lower A-arms which served to move the bottom spindle pivot up 2 inches. The inner pivot of the upper arm was raised the similar amount by welding a 2 inch bridge to the frame. Two inch lowering blocks were installed in the rear. The two springs were changed by adding a 2nd leaf to the left rear spring between the main leaf and the one just below it. Then a used 2nd leaf was placed in the right spring, making the car stiffer. Once the bodywork was done, the car was painted in a two-tone color scheme consisting of light blue on the lower body sections with a darker hue sprayed onto the windshield posts and around the cockpit edge. The center of the dashboard was painted white. The interior was done in light blue and white Naugahyde. The car was fit with Packard hubcaps with Studebaker knock-off centers and accessory fender skirts with flares running along the bottom edge. Dual pipes terminated in 1954 Chrysler exhaust extensions. The engine remained stock.[1]

Nearly two years after Melvin left the car in Vaun's body shop, the car was finally completed. By March 1956, when the car was featured in Rod & Custom Magazine, Melvin still hadn't returned from duty overseas and he hadn't even seen the car yet. Due to the then-current high cost of living, Melvin made the decision to sell the car.[1]

Please get in touch with us at mail@kustomrama.com if you have additional information or photos to share about Melvin D'Loss 1950 Ford.