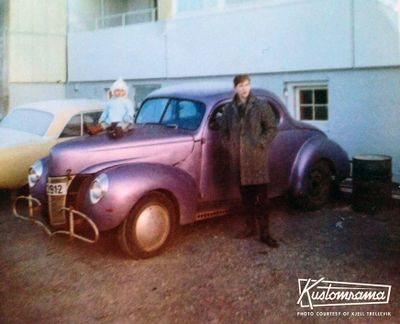 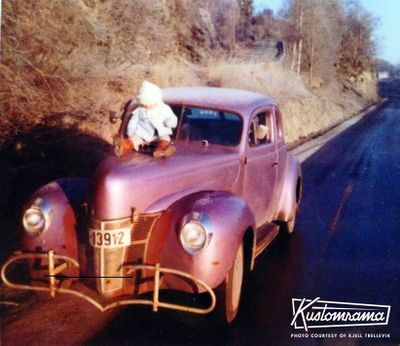 1940 Ford Coupe owned and restyled by Kjell Trellevik of Bergen, Norway. In 2017 Kjell told Sondre Kvipt of Kustomrama that he always has been fascinated by restyling things. Everything from bicycles and motorcycles to cars.[1]

Kjell lived in Gothenburg, Sweden from 1959 to 1961. While he was there he had a Lincoln and a Ford Crown Victoria that he was fooling around with. There were some mildly restyled cars around when Kjell lived in Sweden, and that was how he got into hot rods and customs. He began restyling the Crown Victoria in Sweden; "I had big plans for it, and began shaving it for chrome. Unfortunately, I didn't have time to do much with it before I moved back to Norway."[1]

"I bought the Ford in 1961 or 1962, shortly after returning to Norway," Kjell remembers. He bought it in town, and it was an old Norwegian-sold car. He began restyling it around 1963 - 1964, and the first thing he did was to replace the worn out flathead V-8 engine with a 1955 Ford Y-block engine. The rear end was a Columbia two-speed. Other modifications included homemade nerf bars, 1961 Plymouth taillights, and a Purple Metalflake paint job. Metalflake was rare in Norway back then, and Kjell's Ford was one of the first, if not the first Metalflaked car in Norway. "I painted it myself, covering the entire body in flake. I purchased the flake from the US. I worked at a paint shop, and we had guns that could tackle the flake." It was originally a two-seater, but Kjell installed seats from a GMC delivery front and back. The deck lid was electronically operated, the running boards had holes drilled in them for looks, and it ran full Moon discs.[1]

Sometime after 1967, after reading about a hot rod and custom car club in Oslo called Nor-Way Custom, Kjell got in touch with Per Arne Knudsen and decided to join the club he had founded.[1]

In the early 1970s, around 1971, Kjell installed a 1966 Cadillac engine and Hydra-Matic transmission in the car. "I had to cut the original firewall out and make a new one in order to fit the engine in the car." The dashboard and other parts of the interior from the Cadillac were also installed in the car. Kjell drove the coupe everywhere, and he even took it to Sweden and the UK. "I have photos of it in front of Buckingham Palace," Kjell told Sondre.[1]

Sometime in the 1970s, after installing the Cadillac engine in the car, Kjell got an offer on the car that he couldn't refuse; "It was the first car that I actually made some money on," he laughs. Kjell sold the coupe to a fellow named Oliver. In 2017 the old Ford was still around, owned by Ole Jan Riple. Kjell has been trying to buy it back from Riple without luck. It has been stored outside for a long time, and it is need of a lot of work.[1]

Please get in touch with us at mail@kustomrama.com if you have additional information or photos to share about Kjell Trellevik's 1940 Ford.