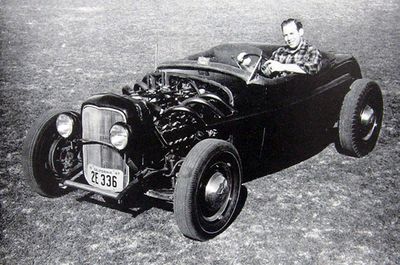 Featured on the cover of Hot Rod Magazine February 1948 (only the second edition of the fledgling magazine) Keith Landrigan's navy blue 1932 Ford roadster is a legendary Hot Rod. Keith built the roadster after returning from military service in WWII.

The engine in Keith's roadster was a ported and relieved 1938 LaSalle flathead V-8. It was bored .155 inch and featured a full race Winfield cam. Heads on the car were made by Arco. The heads were milled .040 and filled. Keith modified the stock manifold on his D Class roadster. He blocked the original carburetor mount, and welded two new mounts, one at each end. For carburetors, Keith used two A. A. 25 Strombergs with double floats. Keith also built his own distributor based on parts from a 1933 LaSalle. On the LaSalle flathead the exhaust ports exits from the top of the block. Long headers emerged out of the hood and swept along the side of the body. Small mufflers were hidden in the long collector pipes.

To decrease the height Keith channeled the body on the roadster. Gabriel tube-type shock absorbers smoothed the ride. A belly-pan extends from the firewall to the rear. Keith removed the door handles and welded the doors shut, since the distinctive headers running along the side of the body prevented the doors from opening anyway. The gas tank was placed in the trunk and a panel covers the rear where the gas tank normally sits. In order to maintain easy access into and out of the car the interior padding was wrapped up and over the top of the door and cowl. This padding also worked as a crash pad. The steering wheel and column shift came from a 1940 Ford. A small chromed box housing Stewart-Warner gauges was mounted at the base of the steering column. For running at the lakes, the custom windshield could be easily slipped out of its brackets. In order to comply with SCTA rules, Keith used a temporary hood to cover the motor.

Up front Keith used 600-16 tires for better riding performance and 700-16's were used in the rear. The braking system was full hydraulic. At El Mirage Keith's D Class roadster was timed at 115.83 miles per hour.

For some excellent cover photos of Keith Landrigan's Roadster, check out The Birth of Hot Rodding book by Robert Genat, Don Cox and Wally Parks.

Please get in touch with us at mail@kustomrama.com if you have additional information or photos to share about Keith Landrigan's 1932 Ford.