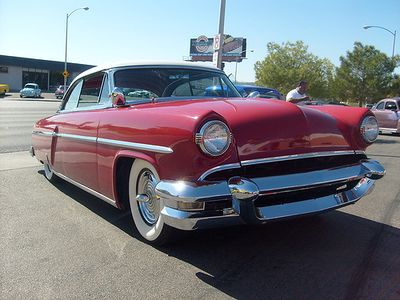 1954 Lincoln Capri owned by Johnny Jarzen of Las Vegas, Nevada. Johnny bought the Lincoln in February [[2006],] after selling his 1952 Packard. Johnny had always liked the 1952-1954 Lincolns, and began searching the web for one he could customize. A stock rust free 1954 Lincoln was found in Western Nebraska. Johnny bought the car unseen, and had shipped it to his home in Las Vegas. The car turned out to be in a good condition, and after receiving the car Johnny replaced the radial tires that came with the car with a set of L78 Denman whitewall tires. Johnny enjoyed this version of the car for about a year, while collecting parts and researching the art of early customizing. After about a year, Johnny continued his dream build by shaving away unwanted chrome. Door handles, rocker mouldings, and gravel shields were sacrificed first. This version was lowered 3 inches up front, and 4 inches in the rear, before it was painted in a bright non-metallic red in the spring of 2008.[1]

As time passed by, Johnny wanted to restyle his Lincoln further. September 2009 the car was stripped, and prepared for Jessie Borkowski of Jessie's Customs to fit the car with a set of frenched 1955 Lincoln headlight rims. The headlight rims were placed right on to the factory peaked fenders. Jesse decked the car, and modified the stock Lincoln fender skirts by welding 1954 Ford flares to them. Nate Blanchard restyled the rear fenders by removing the lower section of the taillights. The gap was filled by extending the rear fenders. The body was completely stripped for paint, and several hours were spent filling and sanding the body. December 2009 the bodywork was done, and Johnny's Lincoln was painted in a 1953 Buick Mandarin Red base. About a tablespoon of Venus Martin Gold Powder, the same powder that Barris used back in the days, was added to the paint for extra sparkle. The roof was painted a 1955 Cadillac color named Gold Goddess. Dual Appleton 112 spotlights and 1953 Cadillac Sombrero's wrapped up the style. Finally the car was reupholstered by Ryan Frawley. The interior and trunk were done in tuck & roll off-white and maroon vinyl with a matching maroon carpet. Custom car enthusiast Rik Hoving guided Johnny through the build answering countless questions from Johnny.[1]

January 2010 Johnny's Lincoln was shown at the 2010 Grand National Roadster Show. The car was presented as "The Thingian", and won "The Shifters Best Custom Award".[1]

Please get in touch with us at mail@kustomrama.com if you have additional information or photos to share about Johnny Jarzen's 1954 Lincoln.