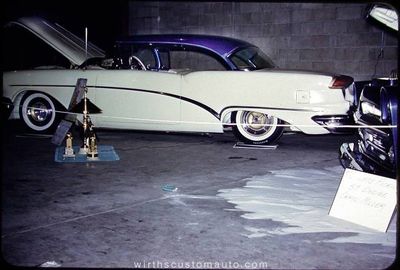 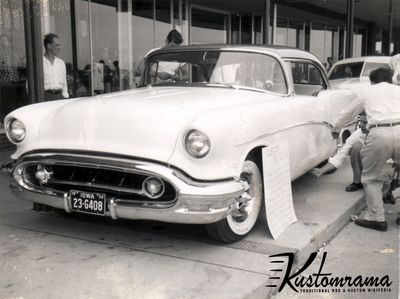 Photo from the Kustomrama Photo Archive showing John's Oldsmobile at a car show in Iowa around 1956. 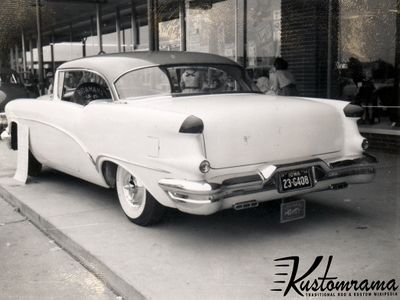 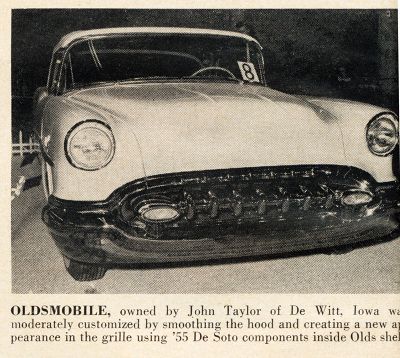 John's Oldsmobile as it appeared when it was featured in Motor Life May 1957. 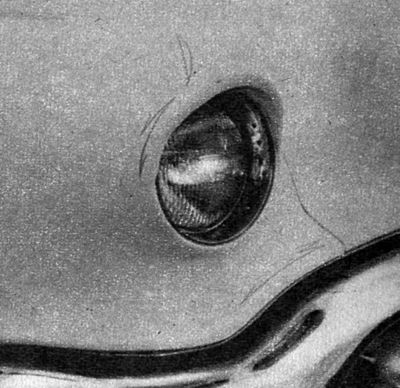 1956 Oldsmobile owned by DeWitt Roamans car club member John Taylor of DeWitt, Iowa. The hood on John's Olds was dechromed and filled. It did also featured louvers punched by Ed Biggs.[1] In 1957 John's Olds was featured in Motor Life May 1957, this version featured a 1955 DeSoto grille.[2] In 1958 the Olds was featured in Car Craft January 1958, this version featured a floating type grille made from 1951 Studebaker and 1951 Packard components was installed along with 1953 Ford headlight rings and sheet metal visors that were frenched in order to give a hooded effect to the headlights. Perforated rings were used inside the frenched headlights. The door handles were removed and the doors were electrically operated. The stock side trim was replaced by 1954 Buick side trim. In the rear, the taillights from a 1954 Packard were frenched in and the deck lid was shaved. The hubcaps were Dodge pieces with model airplane prop spinners inserted into the centers. The torch work was done by Lowe's Auto Body in DeWitt and Al Cravero painted it Alcan White and Royal Blue. The remaining mods were performed by John himself and he chose to keep his car at stock ride height rather than lowering it.[3]

Please get in touch with us at mail@kustomrama.com if you have additional information or photos to share about John Taylor's 1956 Oldsmobile.