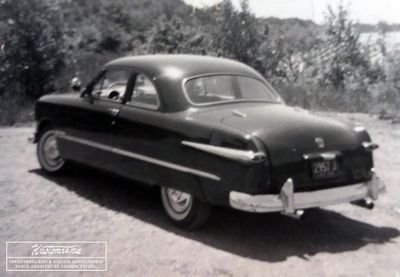 An early photo of Cassaubon's Ford, taken before Clarkaiser restyled it. Sharon Crystal went to High School with John, and she came across this photo in 2020 as she was going through old photos and memorabilia. Modifications inlude Sombrero style hubcaps and dual spotlights. Sharon told Sondre Kvipt of Kustomrama that she rode in the car many times. Photo courtesy of Sharon Crystal. 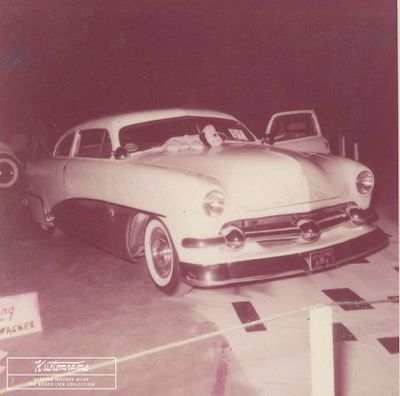 A photo of Cassaubon's Ford taken at an indoor car show. The back of the photo was dated May 1958. Photo from The Roger Lick Photo Collection. 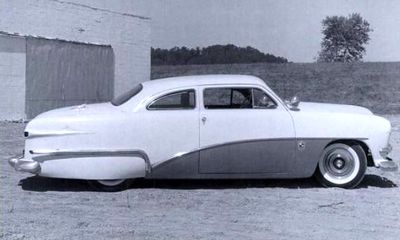 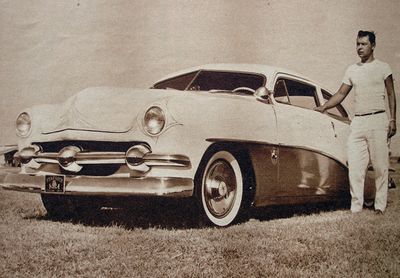 The car as it appeared in Hot Rod Magazine August 1958. Photo by Eric Rickman 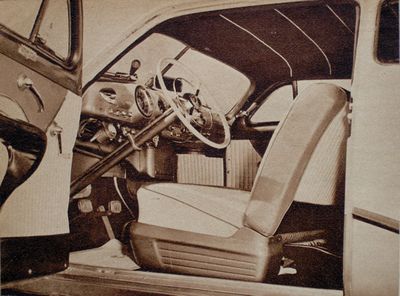 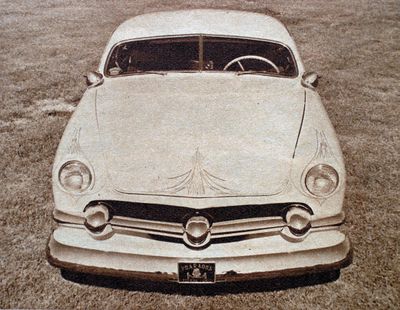 The car as it appeared in Street Rodder February 1979. 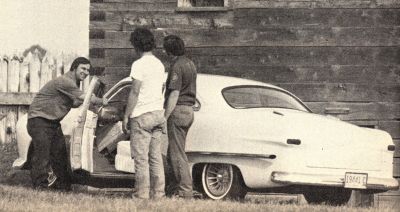 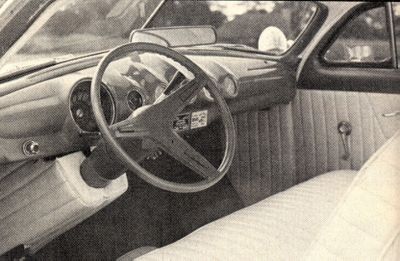 The car as it sat after Harold Workman began to restore it. 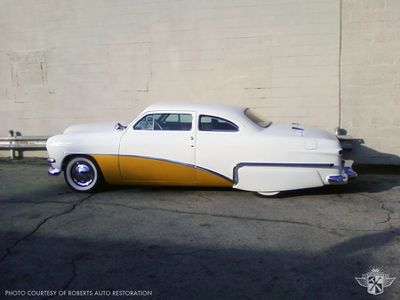 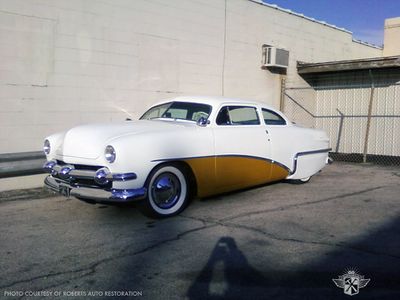 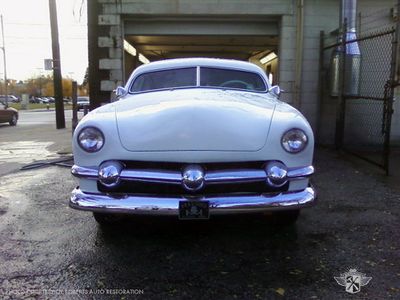 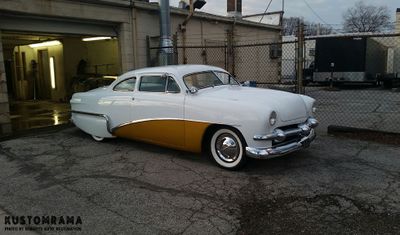 1950 Ford Club Coupe restyled by Clarkaiser Custom Shop for Pharaohs member John Cassaubon of Toledo, Ohio. Ron Clark and Bob Kaiser of Clarkaiser in Detroit, Michigan nosed, decked and shaved the car for handles. The doors and deck lid were push-button operated. The top was chopped 5 inches[1] and the body was lowered. The front and rear seats were cut down 2 inches due to the lowered ceiling. The headlights were frenched, and the taillight housings were modified and fit with rectangular 1941 Cadillac lenses. The front gravel shield was molded-in for a one-piece look. The grille opening was rounded, molded and fit with 1953 Ford straight grille bar which was trimmed and featured three large bullets. The hood corners were rounded. The exhaust was kind of unusual on this car; it passed through the body in front of the rear wheel and rolled up over the fender skirts. Side trim from a 1955 Buick separated the two tone scheme paint consisting of white and gold. Eldo's Trim Shop upholstered the interior in matching Gold and White Naugahyde. The dashboard was modified by adding Pontiac gauges along with the original ones. The coupe was powered by a 1954 Oldsmobile Rocket V8. 1956 Lincoln wheelcovers and dual spotlights completed this Ford.[2]

In the beginning of the 1970's, Tom Nowak of Waterville, Ohio found the car ready to be scrapped at a local wrecking yard. Tom bought the remains for $200 and trailered the remains of the once famous custom back to his residence. There was not much left and the body was in a poor shape, however Tom decided to restore it back to its former glory. The worn out Oldsmobile Rocket engine was replaced by a stock 400 Chevrolet engine with a 350 turbo-hydro. The body was repaired and Tom chose to paint in the same color scheme as it once was, cream and gold lacquer. All of the modifications Clarkaiser did was left alone, however a new set of Western wheels and a new set of tires were added. The car received a new tuck & roll interior from Cliff's Upholstery in Toledo, a newer steering column and extra Stewart-Warner gauges were installed. The grille was modified by installing a 1953 Chevrolet grille with 4 extra teeth attached.[3]

Some time after the car was featured in Street Rodder February 1979, Harold Workman of Toledo, Ohio bought the old Clarkaiser custom. The car was literally a basket case, with parts stored in baskets and buckets when Harold bought it.[4] Harold bought the car at an auction and started to restore it. During the restoration the top chop was reworked, and improved in order to make it flow better. In 2005 or 2006 Harold listed the car for sale. Louis Lapham went to check out the car. It was surprisingly intact when Louis saw it, and Harold had been able to locate some of the missing pieces, including a 1950s Oldsmobile engine and transmission The car had no headliner at the time, and according to Louis you could not see any of the welds in the roof. A testament to the great work Clarkaiser did. At the time, Harold wanted $11,000 for the car.[5] The car was listed for sale on eBay in 2007.[6] November 2008 the car was listed for sale in the local Auto Trader of Toledo. The asking price by then was $25,000.[7]

In August of 2012 the car was currently owned by Tom Fox of Toledo, and it had been completely restored and repainted as original by Roberts Auto Restoration of Toledo. The restoration was completed in the fall of 2011.[8]

Please get in touch with us at mail@kustomrama.com if you have additional information or photos to share about John Cassaubon's 1950 Ford.