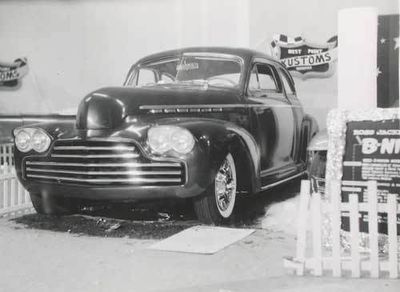 The first version of Harvey's Chevrolet as it appeared in 1958.[1] 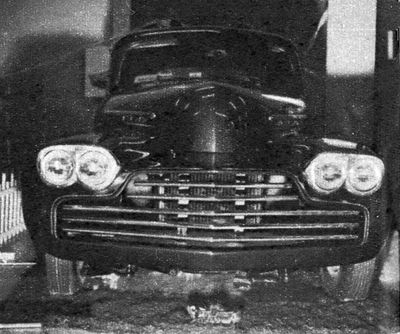 The second version of Harvey's Chevrolet, as it appeared after the DeSoto bumper had been installed. This version was featured in Custom Cars August 1959. Photo by Bud Lang. 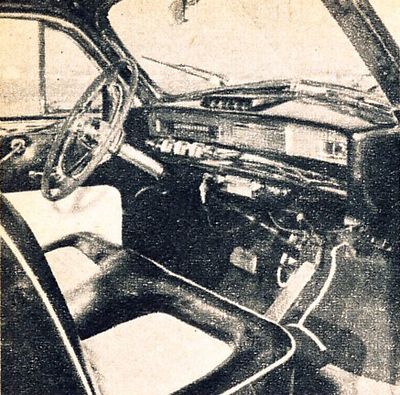 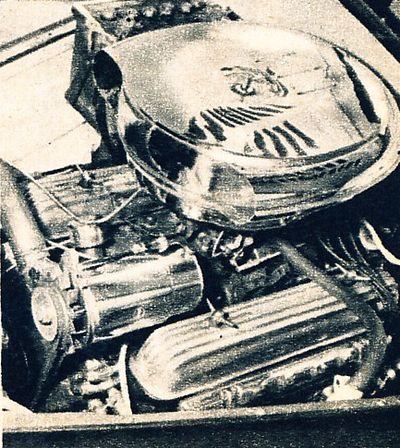 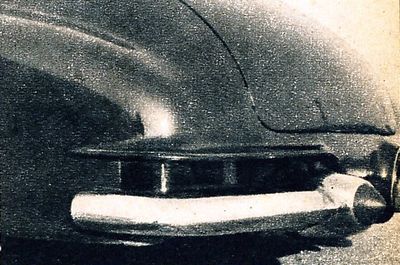 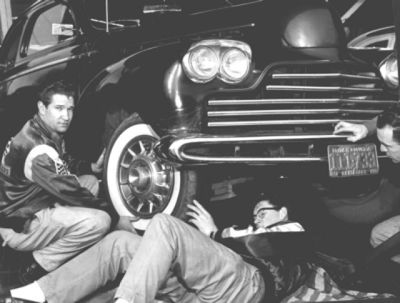 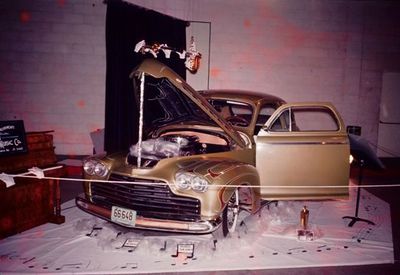 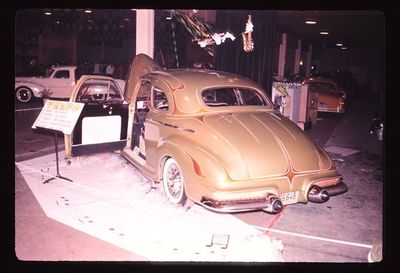 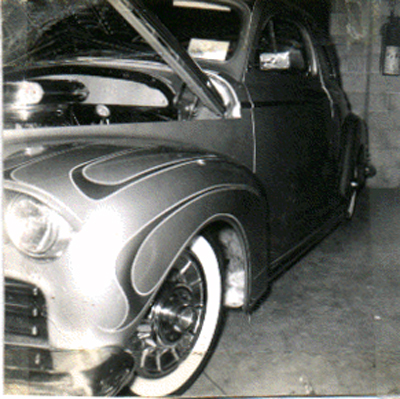 A photo of the coupe taken after Quarter Milers of Victoria, BC President Bob Clarke had bought it from Harvey. Photo courtesy of the Quarter Milers Car Club. 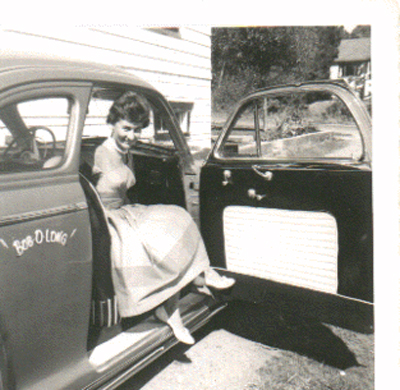 Another photo of the coupe taken after Bob had bought it. Photo courtesy of the Quarter Milers Car Club. 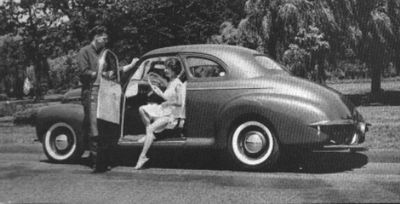 The coupe as it appeared after Bob Clarke had restyled it. Photo courtesy of the Quarter Milers Car Club. 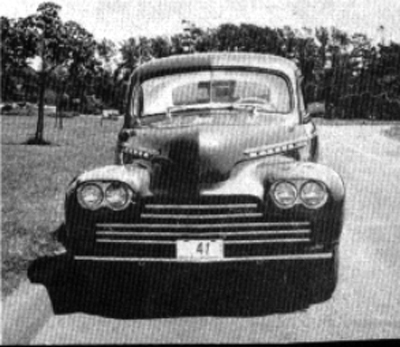 Up front Bob replaced the DeSoto bumper-grille with a chromed tube. Photo courtesy of the Quarter Milers Car Club. 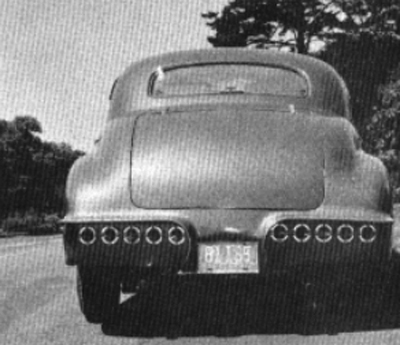 The design of the rear end was changed as well. Photo courtesy of the Quarter Milers Car Club. 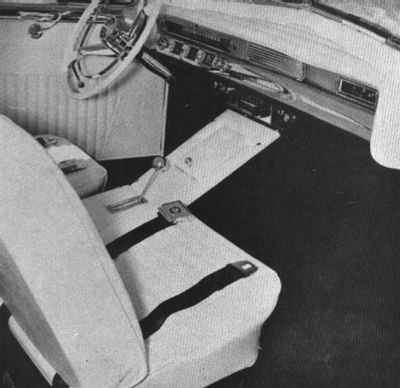 The maroon version of the coupe was fit with a new interior. Photo courtesy of the Quarter Milers Car Club. 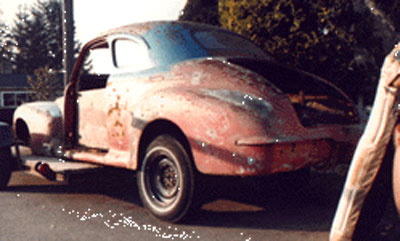 The coupe as it say while Mike was restoring it. Photo courtesy of Mike Georgelin. 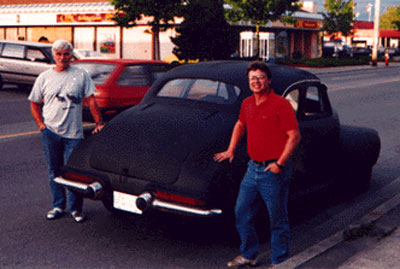 Harvey Funk and Mike Georgelin with the Chevrolet. This photo was taken after Mike had started to restore it. Photo courtesy of Mike Georgelin. 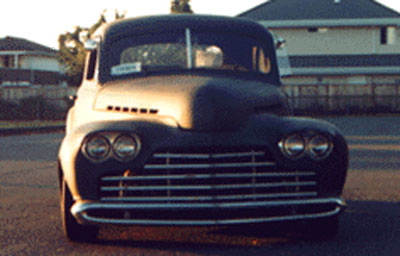 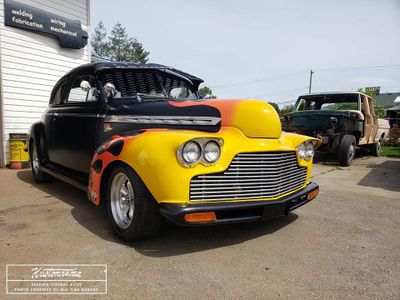 Funk's Chevrolet as it sat in April of 2021. When the photo was taken, Old Time Garage had cleaned it up for the current owner. Photo courtesy of Old Time Garage. 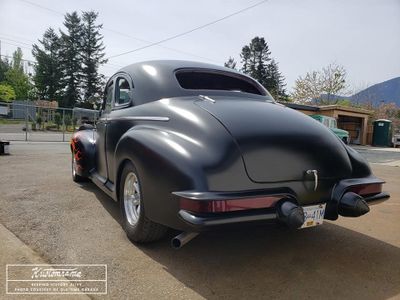 Photo courtesy of Old Time Garage.
Survivor History Car is Going Home! Old Time Garage showcasing the Harvey Funk Chevy as it appeared after they had cleaned it up.

1941 Chevrolet Business Coupe owned by Harvey Funk of Vancouver, British Columbia, Canada. Harrv restyled the Chevy with the help of three of his friends. The first version featured quad 1958 Chevrolet headlights and a custom tube grille. The car was nosed, decked and shaved for door handles to achieve a cleaner appearance. The trunk, doors and antenna were opened from the dash by an electric solenoid system. The unusual rear end featured a custom bumper made from 1955 Pontiac and 1957 Chevrolet components. The taillights were formed of plastic, and extended above the bumpers. The dashboard came from a 1956 Buick, and the steering wheel was from a 1955 Pontiac. The upholstery was done by Terry McGowan in pleated and rolled Fabrilite upholstery in a black and white color scheme. The body was painted in a Cadillac Maroon lacquer. The coupe was lowered 4" and fit with 1957 Cadillac Sombreros with special centers. The engine was from a 1956 Buick with a Dynaflow trans, which made the car to turn 93mph at drags. Later on, the car was fit with a 1957 DeSoto bumper grille up front.[2]

Harvey sold the car to Quarter Milers of Victoria, BC President Bob Clarke so he could make a down payment on a new home in Richmond. This version was painted green-gold metallic with flames, and the car was then known as Limefire. After Bob bought the car, he restyled it further. The DeSoto bumper was removed, and replaced with a chromed tube. The spilt rear bumper was removed as well, and the taillights Harvey had installed were replaced with 10 round taillights. After Bob had restyled the body, the coupe was painted maroon. The maroon version was fit with a white interior that sported VW bucket seats and a home built center console.[3]

Bob eventually sold the car, and it changed hands a few times before it returned to the mainland. It was sold to a fellow out in Chillwack who supposedly stripped it down with the intent of redoing it. Around 1990, Mike Georgelin of Richmond bought the old custom from his neighbor Russ Jackson. When Mike got the car, it was just a shell on a rolling chassis with many of the original parts missing. A previous owner had also clipped it with a Camaro front end. After buying the car, Mike heard that someone had dragged the coupe around with a front end loader until every panel needed heavy work. While restoring the car, Mike uncovered some of the green gold metallic paint, as well as some of the maroon paint that Harvey put on it. Mike's plan was to restore the car to how it looked when Harvey owned it. Lucky for Mike, Harvey was his neighbour, so he was able to pick Harvey's brain on how much of the custom work was done. During the restoration, Mike had to fabricate the rear bumper and taillights. The rear bumpers were made from 1957 Chevrolet bullets and a Valiant bumper. Mike had to fabricate the tube grill and 1957 DeSoto bumper up front as well. The front bumper was sectioned and turned upside down. The louvered hood was long gone, so Mike located a temporary hood he installed on the car. He had plans to have another one louvered. Under the hood, Mike installed a 350 turbo 400 combo. Unfortunately, no funds forced Mike to sell the car, and he sold it to John Adamson around 1999-2000. In 2014 Mike believed John lived in the Langley area.[4]

Please get in touch with us at mail@kustomrama.com if you have additional information or photos to share about Harvey Funk's 1941 Chevrolet.