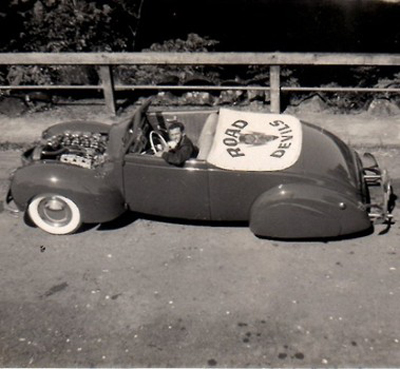 A photo of Papio's Ford taken late 1957 or early 1958 on Rainbow Drive. Joe Correra, the founder of Road Devils of Hawaii is sitting in the car. Photo courtesy of Honolulu Streets Magazine. 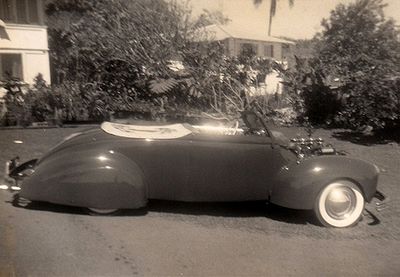 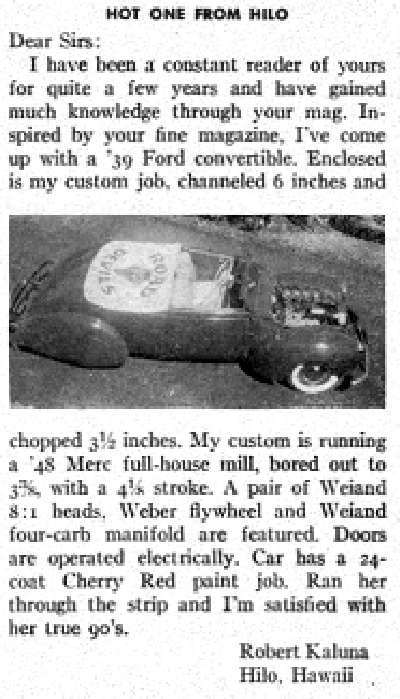 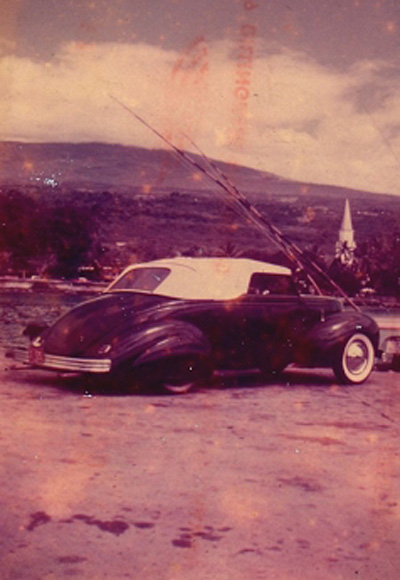 A photo of Papio's custom taken around 1957-1958 at Kailua Pier in Kona. Photo courtesy of Honolulu Streets Magazine. 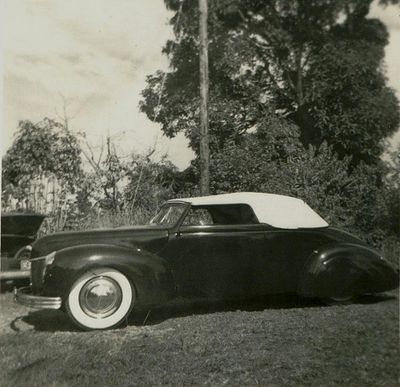 1939 Ford convertible owned and restyled by Harry Keiichi Nishiyama of Hilo, Hawaii. 25 years old, Harry started the build in 1949. According to later owner Robert Kaluna, the top was chopped 3 1/2 inches. The body was channeled 6 inches before Harry gave it a cherry red paint job.[1]

It is believed that Harry sold the convertible around 1952. It changed hands at least two more times before it ended up with Robert "Papio" Kaluna in 1955. Papio was an avid hot rodder from start. At 14 he was already reading Hot Rod magazine, taking notes and saving for his own custom ride. Around the time he purchased the '39, he could be found hanging out with his friends, Joe Correa, Eddie Mattos and Tony Rodrigues, to name a few, at Bell's Fountain, a Hilo Ice cream and sandwich shop. He'd cruise with Joe in the chopped convertible down Kamehameha Avenue also known as Front Street, with an occasional jaunt up Rainbow Drive. In 2009 Joe told the Honolulu Streets Magazine, "Back then you could go 100 MPH down Front Street" without seeing a car on the road."[1]

Papio knew from reading rod magazines that he'd have to do something really unique to his '39 that would get it noticed and land in the pages of Hot Rod. So, one day at Bell's, or maybe it was at Rainbow Falls, no one really remembers where exactly, he and Joe sketched a Road Devils design that resembled one out of a JC Whitney catalog. He wanted it on the backseat tonneau cover. "I might have seen it on one of those car club plaques they used to sell," said Joe. At that moment the Road Devils of Hawaii chapter was born. Papio took Joe's hand drawn draft to Shikuma's Sign Shop to have the insignia painted on the cover. While Papio went off to see Shikuma, Joe began spinning ideas about organizing a close knit bunch to become perhaps Hawaii's first real car club.[1]

In early 1958 the Road Devils mark was branded on Papio's car.Papio snapped a couple of photographs on Rainbow Drive, then mailed em’ to Hot Rod magazine. By June of that same year it appeared in the Post Entry section. By then, the car was running a 1948 Mercury full-house mill, bored out to 3-3/8, with 4-1/8 stroke. It ran a pair of Weiand 8:1 heads, a Weber flywheel and a Weiand four-carb manifold.[1]

In 1960 the Big Island was struck by a killer tsunami. It destroyed much of Hilo town and Front Street, taking Bell's Fountain with it. In the aftermath several businesses were wiped out for good or relocated to outer islands. Papio's workplace, Motor Supply, was one of them. A week after the tsunami, Papio sold the Ford to Eddie Mattos of Hilo and moved to Oahu to continue working for Motor Supply as a tire re-capper in Honolulu.[1]

Eddie took the flathead out and installed a 1952 Oldsmobile Rocket 88 engine. One day while trying out a new clutch, he lost control driving on Kaumana Drive, hit a tour bus, and totaled the car. Eddie sold the remains to Tony Rodrigues for $150. If Tony had his way, it wouldn’t stay wrecked for long. So he paid a visit to Joseph H. Correia, master welder and metal-man of Hilo. If Correia couldn't fix the '39, no one could. Correia carefully looked over the convertible, examining its undercarriage inch by inch. Then, concluded that it would be better to just part-out the car than to repair it. The frame was too badly bent. Tony looked for a while to see if anyone could fix it. He couldn't find anyone, so he gave it to Joe Correia who dismantled it and sold it for scrap.[1]

Please get in touch with us at mail@kustomrama.com if you have additional information or photos to share about Harry Keiichi Nishiyama's 1939 Ford.