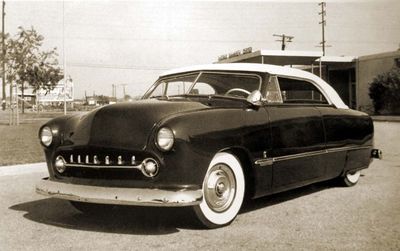 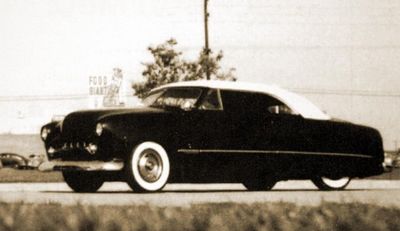 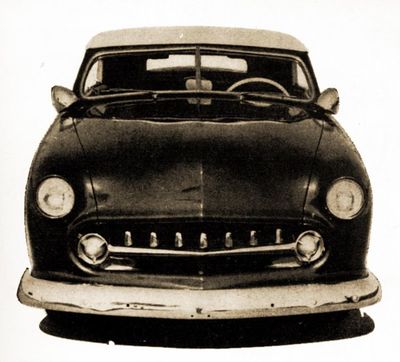 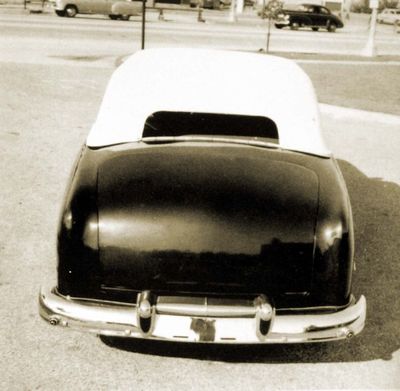 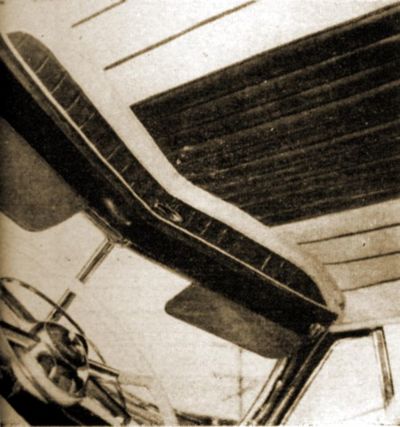 1950 Ford convertible customized by Barris Kustoms for Fred Calvin. The Ford is also known as the 7 tooth Ford. The windshield was chopped 2 inches, Glen Houser of Carson Top Shop made and installed the nicely padded top. the red and white pleated interior. The grille opening was made by cutting and welding together exhaust tubing, the top part was welded to the hood wich was cut down from the grille opening. The grille was made by using two 1951 Ford grille bullets, and a horizontal bar made out of sheet stock with 7 tooths welded on. The hood was nosed and peaked, the front gravel pan was molded to the body, and the headlights were frenched. The door handles were flushed as well. The front bumper was cleaned by removing the bumper guards. The rear bumper was replaced by a 1949 Mercury unit. The taillights and windflairs were removed and the crew peaked the rear fenders. New taillights were installed in the bumper guards. The lenses were handmade by using red lucite. Dual Appleton spotlights and Oldsmobile hubcaps were added. Once the bodywork was finished, it was painted fire engine maroon metallic. The car received a red and white pleated interior by Carson Top Shop.[1]

Please get in touch with us at mail@kustomrama.com if you have additional information or photos to share about Fred Calvin's 1950 Ford.