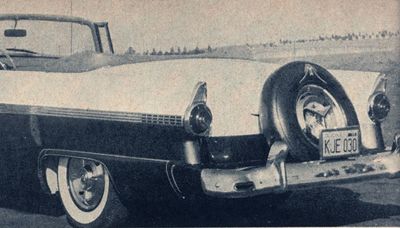 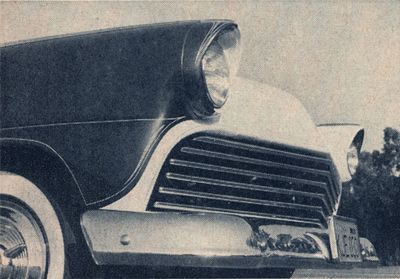 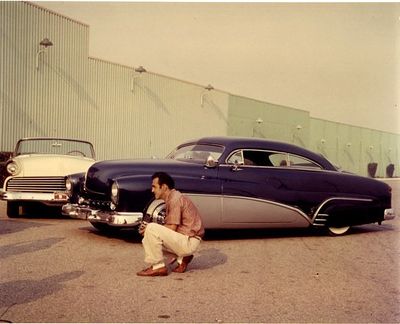 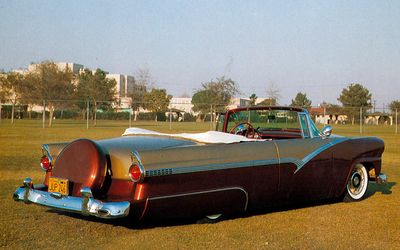 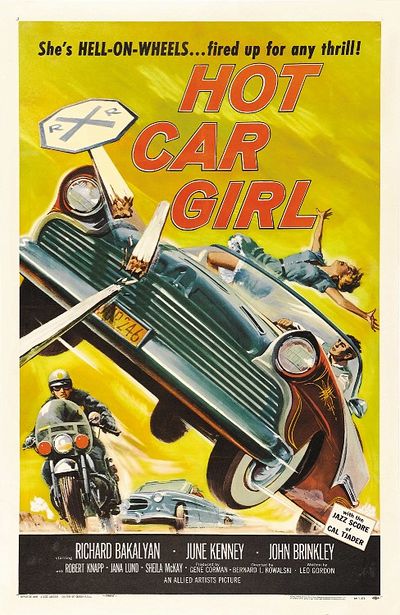 1956 Ford Convertible restyled by Barris Kustoms for Frank Monteleone. After finishing his 1941 Ford, Frank was ready for something new, that something was this convertible. Frank bought the car used from a lot on Brand Boulevard in Glendale. In the beginning the car was just going to be a daily driver, a nice family car. Frank had no intentions of touching it. He had his 1941 Ford, and didn't need another kustom car. One day while driving his stocker, a truck sandwiched him against another car and wrecked both the front and rear. After the accident George Barris and Frank figured they might as well fix it up. They began by repairing the front end.[2] The made a grille shell from solid 1/2 inch round strip molded to the fenders and hood. Inside the grille opening, a hand formed grille made out of 3/4 inch thick round tubing was inserted. In the rear they added a Coachcraft continental kit, and extended the gravel pan to fit. An Oldsmobile hubcap was placed inside continental kit. A Barris exhaust system that came through the rear bumper was also installed on the car. Frank's car was painted in a two-tone bronze and white lacquer, and featured pinstriping by Dean Jeffries.[3]

Frank's car was later redone with full length 1957 Mercury skirts, 1957 Ford taillights, 1958 Cadillac hubcaps and a new paint job in Sam Bronze and gold. The upholstery of the car was gold and white, and featured a half tonneau which covered the rear seats. Frank's own upholstery shop upholstered the car. This version of the car was used in the movie Hot Car Girl. They built the whole movie around the car, but as usual, they also thrashed it. Frank sold the car to one of his employees, and he has no idea about what happened to it.[2]

Please get in touch with us at mail@kustomrama.com if you have additional information or photos to share about Frank Monteleone's 1956 Ford.