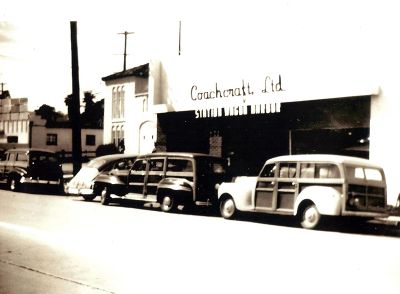 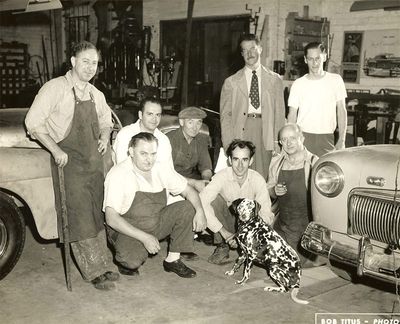 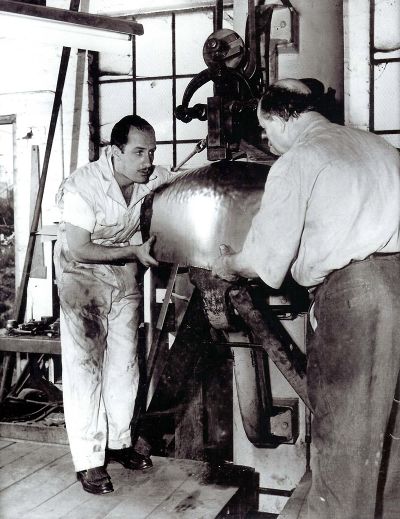 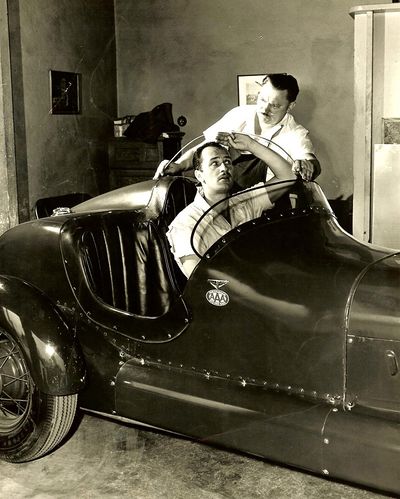 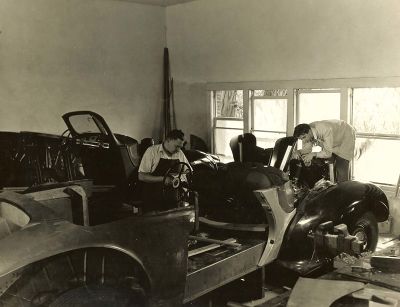 Rudy Stoessel with helper assembling a cowl on a Darrin 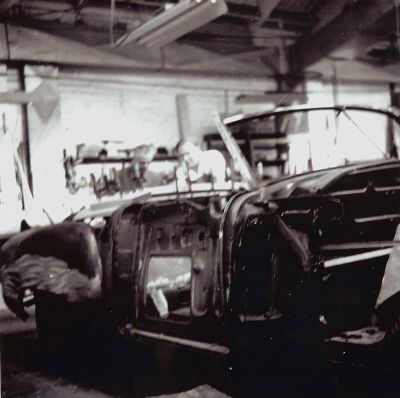 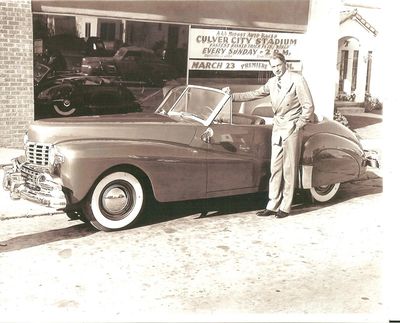 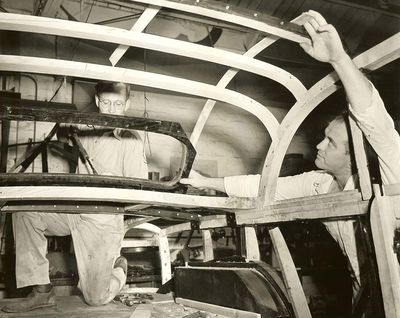 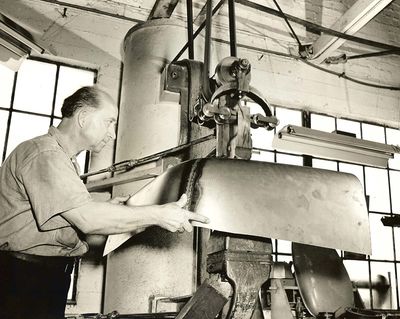 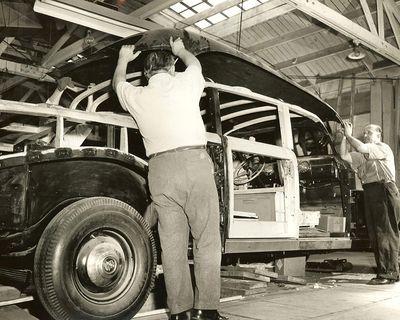 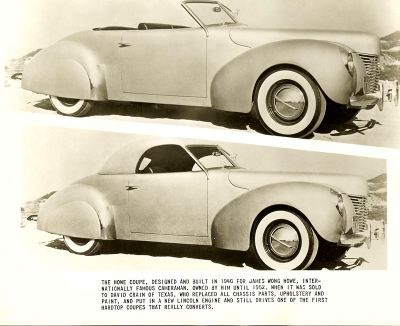 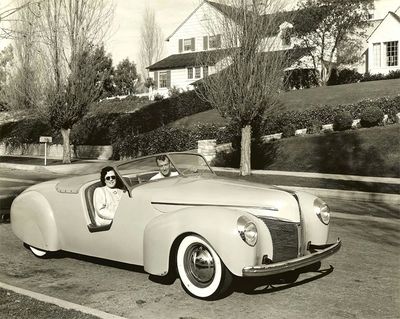 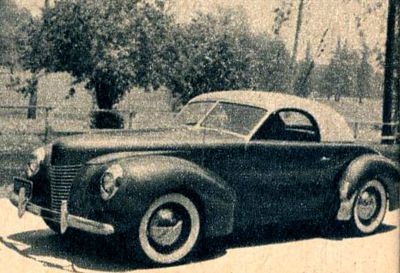 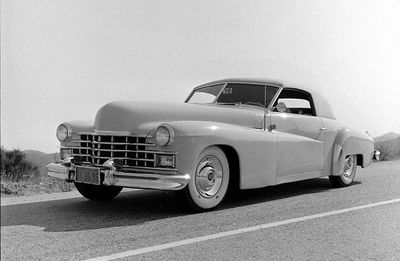 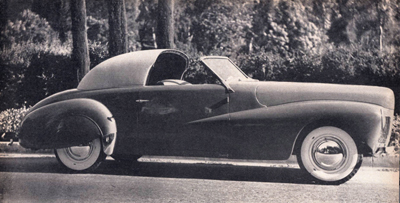 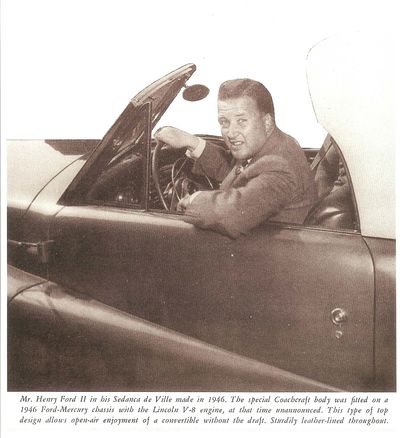 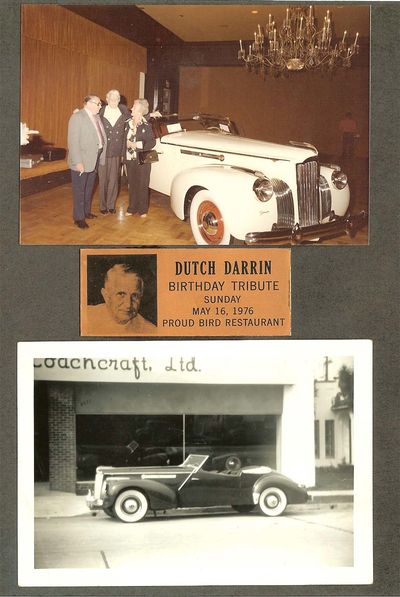 Coachcraft Ltd was a Custom Body Shop located in Melrose, Los Angeles. Established in the spring of 1940, the company was started by a leftover crew from Howard Darrin, manager for the Sunset Strip Shop Darrin of Paris where the Darrin Packards were made until 1939. When Howard sold out to Packard and the production was moved to the east coast the guys got together and Established Coachcraft Ltd.[1]

The men who worked at Coachcraft was Burton Chalmers, Rudy Stoessel and Paul Erdos. Burt was the front man who'd sold for Cadillac, Citroen, Renault and Packard-Darrin. Burt created the Coachcraft image and had Hollywood connections, so necessary for a business of this kind.[2] Rudy from Bavaria worked in New York at the Pierce-Arrow's experimental department, where he began building Prototype body parts in wood. When the job ended in 1929, Rudy moved to Pasadena, California where he was lucky to be hired by J. Gerald Kirchoff who had left the Walter Murphy Company to form his own coachbuilding company. Paul and Burt also worked for Kirchoff. Paul was the metal shaper.[2]

Masters of the Wood Superstructure

Coachcraft were masters of the wood superstructure, specializing in custom-building station wagons while acting as home port for wayward station wagons of the garden variety.[3] Over the years, Coachcraft tried its hands at everything from continental kits and roof racks to cars that carried wheelchairs.[2] In the 1940s and 1950s, they were also known for their exemplary woodys and their woody business became so prolific that the shop was re-titled "Station Wagon Harbor". Coachcraft advertised that they repaired and replaced damaged wood panels on other wood-based station wagons.[2]

In 1946, Henry Ford II commissioned them to build a car based on a Mercury chassis, featuring a custom body with 1940 Zephyr rear fenders and a 1946 Continental front sheet metal. It sported a not-yet-introduced 1949 Lincoln flathead, and another three-piece padded hardtop.[2]

Although the three founders have died, the son of Rudy Stoessel, continues to operate Coachcraft. He moved the operation from West Hollywood to Moorpark, north of Los Angeles.[2]

Clarence later sold the company to James Wong Howe.[4] In 2015 the company was located in Fillmore, California.[5]

Please get in touch with us at mail@kustomrama.com if you have additional information or photos to share about Coachcraft Ltd..