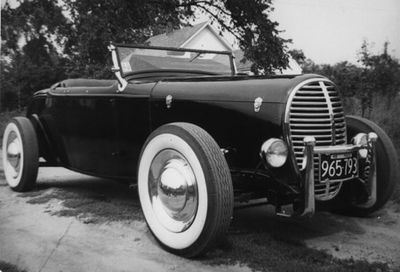 Fran's roadster as it looked when it was completed in 1949. Removable cycle fenders were soon added. Photo from the Ralph Bannister collection. Courtesy of Hot Rod Revival.

Fran's roadster at the 1950 Bonneville Nationals. Fran drove the car across the continent in order to compete at the salt. 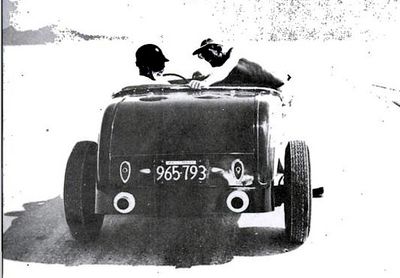 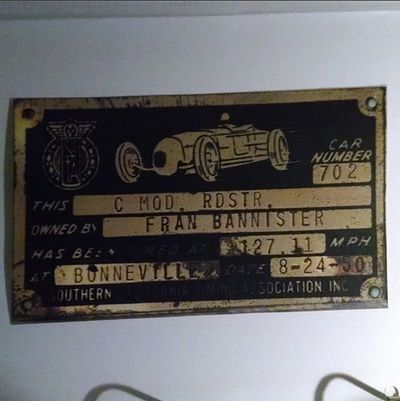 A photo of Fran's timing tag from Bonneville in 1950 that Larry Hook posted on Instagram in May of 2014. Photo courtesy of Larry Hook.

1932 Ford Roadster owned by Fran Bannister of Wilmington, Massachusetts. Fran and his brother Ralph built the car at Fargo Transportation Co in Boston, Massachusetts, an interstate trucking outfit where they worked as mechanics and machinists. Fran and Ralph channeled the body over the frame and installed a chromed and sectioned 1939 Ford Pickup grille. The grille was a signature feature on Fran's rod, and he chose it because he wanted a rounded hood. The rounded hood was matched to unlouvered side panels. Most of the work was done by Ralph, who was the better fabricator. The build was completed in 1949, and it became one of the most well-known hot rods in New England.[1] After completing the build, Fran drove the car to Bonneville with his wife and son, to race the car at the 1950 Bonneville Nationals. Running on pump gas, Fran attained 127 mph on the salt. According to Hot Rod Magazine October 1950, Fran was the first to arrive at the salt flats, and amongst the last to leave. He promised to return and go faster next year.[2] Later on In 1950, Fran's roadster gained national recognition as it was featured in Hot Rod Magazine March 1950.[1]

The car eventually disappeared, and it was away from the scene for many years. There was a rumor that the car still existed, and in 1997 Larry Hook received a call about the whereabouts of the car. Several hours later, it was packed for delivery to it's new home. Restoration photos were published in The Rodder's Journal Number Fifteen in 2001. At the time the car being restored back to how it appeared at the 1950 Gamache Rod & Custom Show in New England.[3] In May of 2014 the restoration was still not completed.[4]

Please get in touch with us at mail@kustomrama.com if you have additional information or photos to share about Fran Bannister's 1932 Ford.