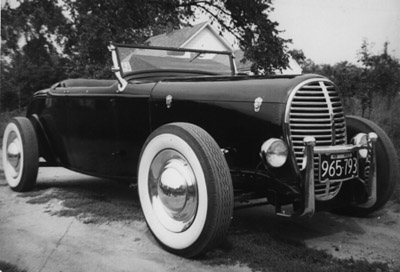 Fran Bannister's 1932 Ford Roadster. Completed in 1949, Fran's roadster is one of the first hot rods of New England.

Fran Bannister is an early Massachusetts hot rodder. Fran was exposed to the art of hot rodding while being stationed in Bakersfield, California during WWII. After the war he returned to Massachusetts where he built a 1932 Ford Roadster. Along with other early pioneers such as Michael Hartney, Fran was instrumental in bringing hot rods to the east coast. Fran had a five years younger brother, Ralph Bannister. Ralph idolized his older brother, and wanted to do anything his brother was interested in, so it didn't take long time before Ralph was the owner of a hot rod as well.[1]

Please get in touch with us at mail@kustomrama.com if you have additional information or photos to share about Fran Bannister.