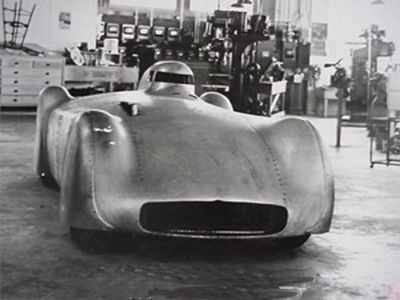 The Fageol Supersonic as it looked when it was first built by Joel Thorne and Art Sparks at Thorne Engineering Racing Shop in Burbank, California in 1938. [1] 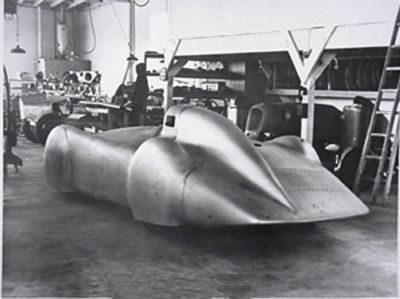 The streamlined race car was constructed to break the land speed record against the Mercedes Silver Arrow and Auto Union land speed cars.[1] 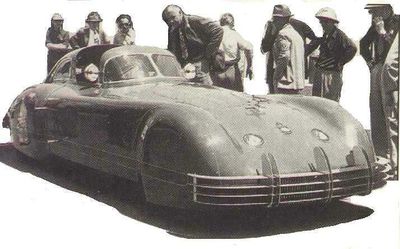 The car at Indy in 1949. This is how it looked after Louis Fageol had turned it into the Fageol Supersonic. 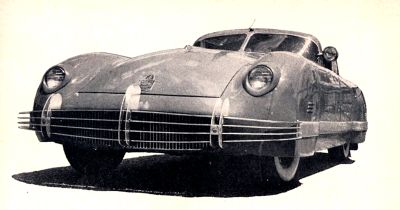 As it appeared in Trend Book 101 Custom Cars. 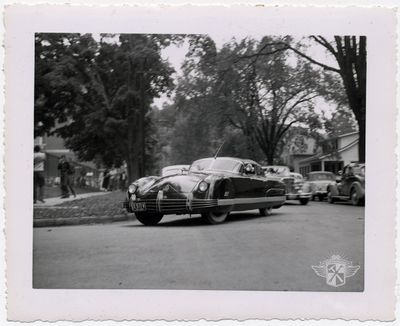 The Fageol Supersonic as it appeared in the mid 1950s. Photo from the Kustomrama Photo Archive. 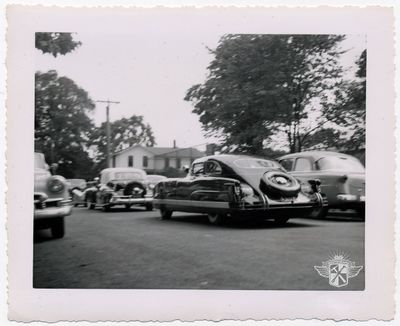 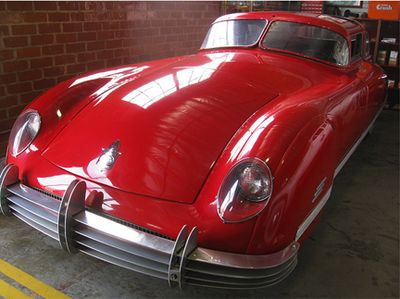 The Fageol Supersonic at the Automobile Driving Museum in El Segundo, California in 2009.[1]

The Fageol Supersonic was originally designed and built by Joel Thorne and Art Sparks at Thorne Engineering Racing Shop in Burbank, California in 1938 as a Land Speed racing car. The streamlined race car was constructed to break the land speed record against the Mercedes Silver Arrow and Auto Union land speed cars. The project was never completed and it didn't see any sand or salt. In 1948 Thorne sold the almost finished car without Sparks knowledge for $2,500 because he had overspent his allowance and needed som quick pocket money to spend on girls.[2] Louis Fageol of Kent, Ohio bought the unfinished race car and turned it into the fabulous "Fageol Supersonic". Louis, was president of the Twin Coach Company that he owned together with his brothers Frank and William. The company specialized in building jet aircraft parts and twin engined buses, and Louis liked to experiment with with automotive ideas as a hobby. In its original configuration the Fageol Supersonic was equipped with twin Miller engines.[1] In 1949 Louis showed his streamlined creation at the Indy. This version featured a low-slanting hood and a slide away sun roof over the front seat.

When the "Fageol Supersonic" was featured in Trend Book 107 Dream Cars in 1953, Louis had restyled the Supersonic further. The wheelbase was 124 inches, and the overall length 210 inches. Louis' dream car was powered by an all aluminum propane power plant producing 275 hp. Fageol designed the ultra-modern engine specifically for LPG-liquefied petroleum gas. The engine was a single-overhead-cam engine on 404 cubic inches. According to Fageol, the car was able to do 150 mph due to its high power/weight ratio and efficient streamlining. Fageol used the Supersonic regularly, and he took it to both California and New York.[3]

The Fageol Supersonic is still around, and was in 2009 owned by Robert DeMars. In 2009 Robert loaned the car out to the Automobile Driving Museum in El Segundo, California.[4] By then the propane power plant and original chassis were gone. Sometime after the 1953 featured story the innovative power-plant was changed out in favor of a Twin Coach six cylinder bus engine.[1]

Please get in touch with us at mail@kustomrama.com if you have additional information or photos to share about Fageol Supersonic.