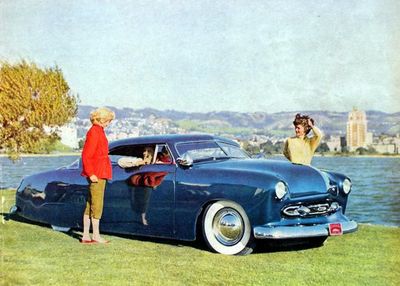 As it appeared on the cover of Hop Up July 1953, in front of Merritt Lake. Photo by Ralph Poole.[1] 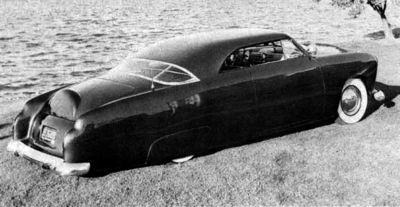 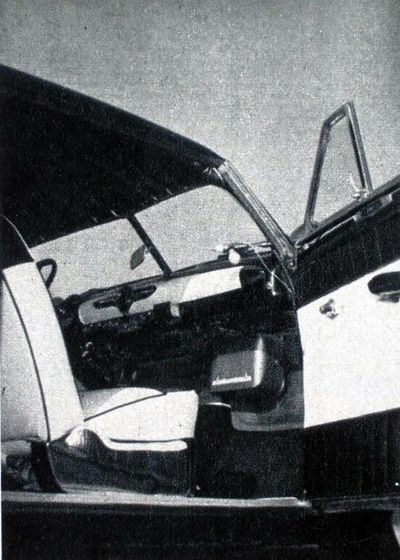 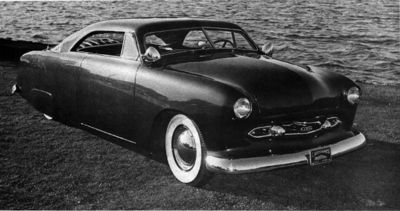 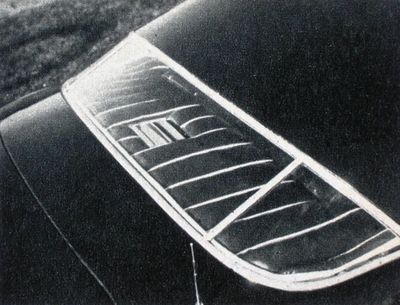 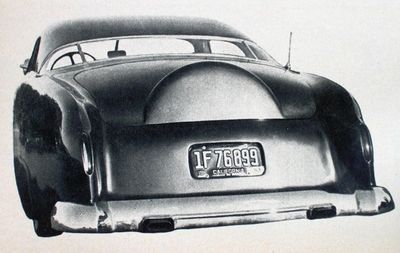 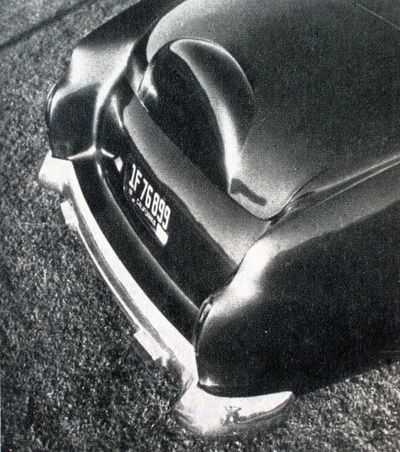 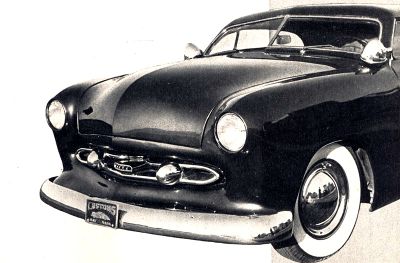 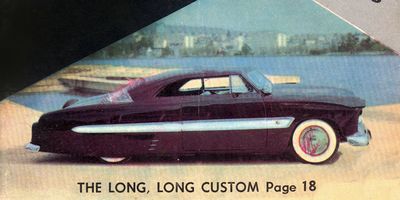 As it appeared on the cover of Rod & Custom June 1955 when Manuel Azevedo owned it.

Compare skirtless car with the photo below. Photo by Spencer Murray 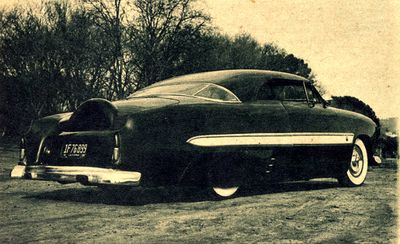 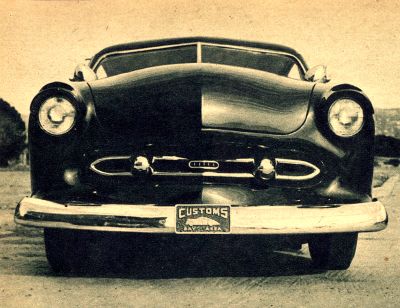 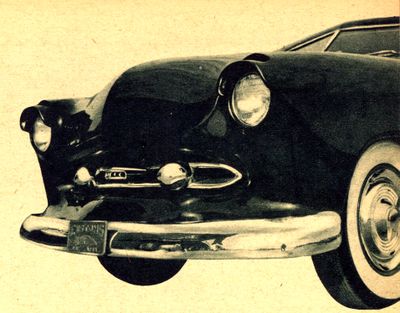 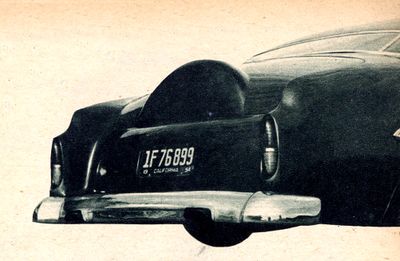 The rear end was updated with 1954 Chevrolet taillights. Photo by Spencer Murray 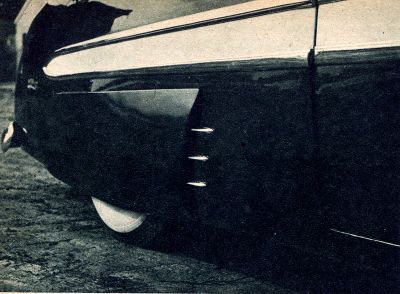 Joe handmade a new set of skirts for the car. Photo by Spencer Murray 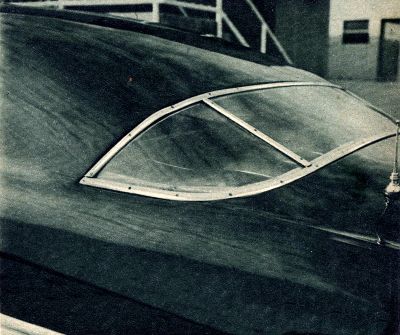 Since stock Victoria rear glass could not be altered to fit the lower lines of the chopped top, Plexiglass, in three sections had to be bent to shape by heating. Photo by Spencer Murray 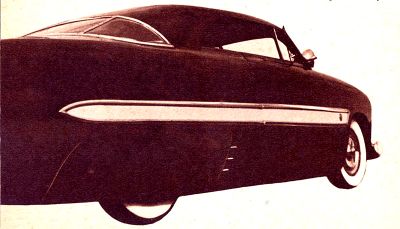 1950 Ford restyled by Joe Bailon of Bailon Custom Shop in Oakland, California for Bay Area Customs member Elton Kantor of Oakland, California in 1951. When Elton bought his 1950 Ford Convertible, he wanted to alter it in such a way that it would no longer resemble its former self. He chose Joe Bailon to customize it to be so defferent in appearance that identification of the custom would mark it as unmistakably. As a result, it won the "Most Elegant Custom Car" prize at the 1953 Oakland Roadster Show.

Though the car started life as just one of a thousands of 1950 Ford Convertible's, Joe chopped the windshield 4 1/2" and installed a 1951 Ford Victoria top. Since the stock Victoria rear glass could not be altered to fit the lower lines of the chopped top, Plexiglass units in three pieces were installed by heating and trimming them into position. The car was nosed, decked and shaved for door handles. All the body seams were filled and side trim was removed to give it a smoother appearance. The rear fenders were extended 12 inches, eliminating the windflares. An ornamental half-continental kit was molded to the deck lid. The top corners on the quarter panels were stretched out and rounded leading down towards a set of custom taillights which Joe made from red lucite. The license plate was sunken-in, illuminated from above and protected by Plexiglass. Rectangular exhaust tips were installed in the rear bumper. The bumper bolts were eliminated by welding studs behind them. Up front, the hood corners were neatly rounded and the headlights were frenched by molding the stock headlight rims to the fenders. The shell opening around the grille was made of two 1949 Mercury shells.The gravel pan was molded to the body and peaked to matched the hood. The grille was made by combine two bumper guards with a unique treatment of chromed tubing. Mercury fender skirts were altered to fit the car. Dual spotlights were installed as a final touch along with the smooth hubcaps on wide whitewalls. Once the bodywork was complete, it was painted dark metallic blue.[2] A new two-tone upholstery in egg-shell white and black leatherette was stitched for the car. A 1951 Mercury engine nestled under the hood, featuring dual manifold, heads, headers, and special ignition.[3]

Eventually Elton got tired of his outstanding car, and decided to go on to other things as he founded Alco Iron and Metal in San Leandro in 1954. Bay Area Customs member Manuel Azevedo, also of Oakland bought the prizewinner from Elton. Manny's opinion in customs was "if some's good, more is better." He contacted Joe Bailon and requested him to update the car with a few more alternations. The latest fad at the time was protruding shades over the headlights to simulate air scoops, similar to the 1955 Pontiacs. Manny thought the sides of the Ford was kind of slab-sided, therefore a set of 1954 Chevrolet Bel Air trim strips were installed, supplied by the local Chevy agency. The strips were separated by a painted band of contrasting white lacquer. Bailon Crests were mounted between the strips on the front fender. Continuing the Chevy kick, the handmade taillights which Joe once made, were replaced with 1954 Chevrolet units. Joe handformed a new set of fender skirts for the car, nearly 3 feet long. The skirts were altered with airscoops in the leading edges by bowing the leading edge of the skirts outward from the body and mounting three teeth to the quarter panel. The car was painted bright purple metallic. The smooth hubcaps were replaced with 1954 Oldsmobile hubcaps. When it was featured in Rod & Custom June 1955, Manny had plans to update the grille.[2]

Please get in touch with us at mail@kustomrama.com if you have additional information or photos to share about Elton Kantor's 1950 Ford.