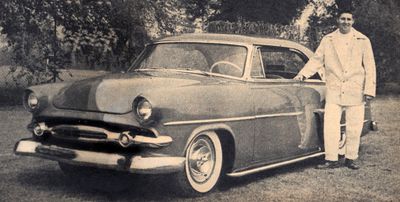 1953 Ford owned by Renegades member Ed Schmidt of Long Beach, California. After graduating in 1952, Ed started working at the Ford Motor assembly plant at Terminal Island, right next to Long Beach. Bruce Bartlett worked with Ed at the plant, and in 2015 he told Kustomrama that as a worker at the plant you were able to buy a brand new car for $25.00 over dealers cost; "He bought this Ford and it went through the line for all of us to build. I could have gotten one too but chose to get the Stude in ’53."[1]

The hood on Ed's Ford was shaved, peaked and had its corners removed. The front was modified by installing a 1954 Pontiac grille bar featuring two bullets on each ends. The door handles were removed and the headlights were frenched. Air scoops were cut into the rear fenders and the stock taillights were replaced with 1952 Oldsmobile units. Once the bodywork was complete, it was painted Matador red lacquer. 1955 Buick flipper hubcaps and lakes pipes wrapped up the style.[2]

Please get in touch with us at mail@kustomrama.com if you have additional information or photos to share about Ed Schmidt's 1953 Ford.