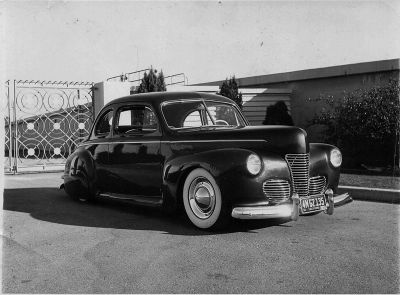 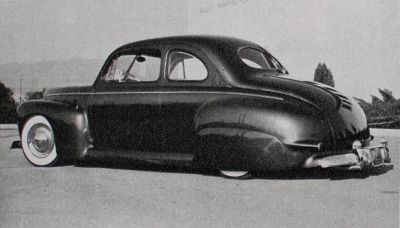 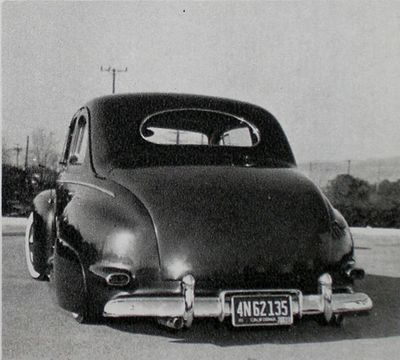 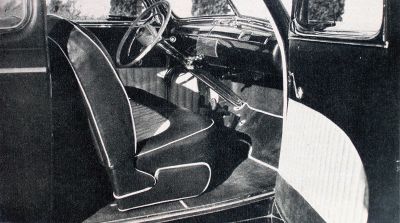 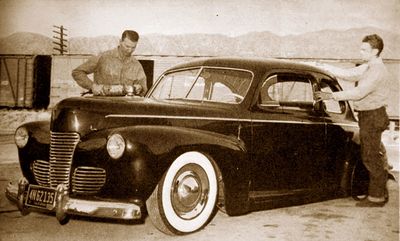 Neil Emory and Clayton Jensen of Valley Custom finishing up their latest artwork.

All of the bodywork and paint was done by Valley Custom Shop. Ed wanted to do something different with the grille on the car, but he didn't want to use a grille from another car. The three stock grilles were removed and new pieces were fabricated from round 5/8" diameter steel rods. For a smooth appearance, the grilles were chrome plated once completed. Tabs were welded to the back of the grilles in order to fasten them to the body panels. The stock center grille of 1941 Fords are straight across the top. The grille on Ed's Coupe featured rounded corners. The front of the hood was therefore altered to fit the new grille. The center strip on the hood was removed, and the resulting joints were filled before the hood was peaked. The headlights were frenched and the body below the grille was faired into the gravel pan which was welded to the body. The front and rear bumpers on the car were from a 1946 Ford. Ed requested Valley Custom to lower the bumpers in order to make the car look lower. The taillights were borrowed from a 1947 Ford, and the extended mounts for the taillights were hand made from sheet stock. The deck lid was shaved, and the upper corners were rounded with a 3 1/2 inch radius. The deck lid was opened by an electric button and a solenoid. The rear gravel shield was also welded to the body and molded.[1]

The stock side moldings were removed and replaced by 1949 Mercury side molding. The door handles were replaced by pushbuttons and solenoids. Inside, Ford starter buttons were located in the instrument panel for opening the doors and outside war surplus micro switch buttons were concealed in the chrome molding. The upper door-corners were rounded with a 3 1/2 inch radius and matched the corners of the deck lid. The running boards were removed and the body paneling was extended down about 2 inches to cover the space formerly occupied by the running boards. Both doors and quarter panels received this addition. All four fenders were molded to the body and the crease was removed and filled in. This was done by cutting the crease entirely out of the fenders before new strips were welded in and the joints were hammer welded smooth. The wheel openings in the front fenders had to be reshaped due to the radical lowering. The car was lowered by dropping the front axle and by kicking up the frame 5 inches in the rear. Front and rear springs were also de-arched and the eyes were turned. In the rear the inner wheel wells had to be raised and boxed to prevent the wheels from hitting the top when going over bumps. The front wishbones were split and mounted to the frame rails in order to clear the frame.[1]

Under the hood, everything that could be removed was chromed, including the top tank of the radiator which required taking the radiator apart.[1]

Once the bodywork was done the car was painted in a dark green metallic lacquer. The instrument panel received the same color. Before the instrument panel was painted Ed wanted the glove compartment door filled in. A Mercury Monterrey steering wheel on the stock column which was chromed.[2] The interior was upholstered by Floyd Tipton of Burbank, California. Smooth aftermarket hubcaps on wide white walls were fit on the car. The complete restyling of Ed's car cost $1,935 USD.[1]

The writer who did the story on Ed's car for Hop Up May 1953 ended his story by commenting that he couldn't find any reason whatsoever to lower a car this much. He continued "All but the slightest of driveways are impassable, and more than two people in the car make it almost impossible to drive down a normal street if the street has any dumps at all. When the car is parked it is an continual danger of having the front or rear mashed in from some careless person parking."[1]

Please get in touch with us at mail@kustomrama.com if you have additional information or photos to share about Ed Jacques' 1941 Ford.