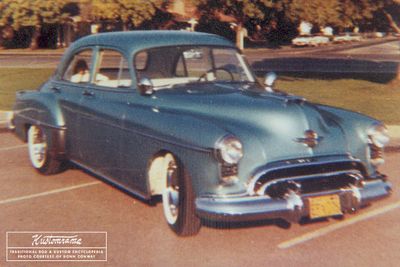 The Olds was Donn's first car, and he bought it from a friend in high school in 1959. When he bought the sedan, it was the stock light green with the stock interior. About a year later he had it repainted in a 1957 Oldsmobile color called AquaMist. The next year or so he drove to Tijuana, Mexico for a custom upholstery job. Photo courtesy of Donn Conway. 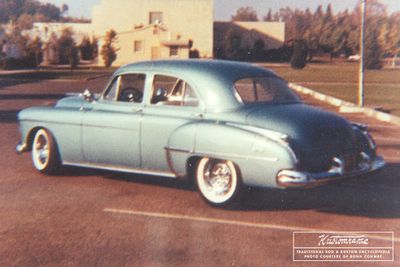 In 1961 he dressed the Olds up with chromed and reversed wheels and dual dummy spotlights. Photo courtesy of Donn Conway. 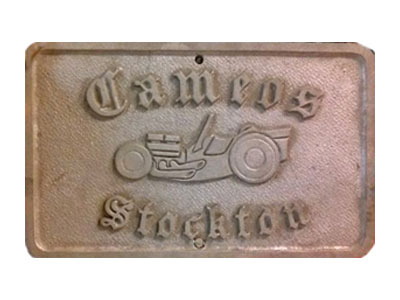 Donn was a member of the Cameos of Stockton car club. Photo courtesy of Car Club Plaques. 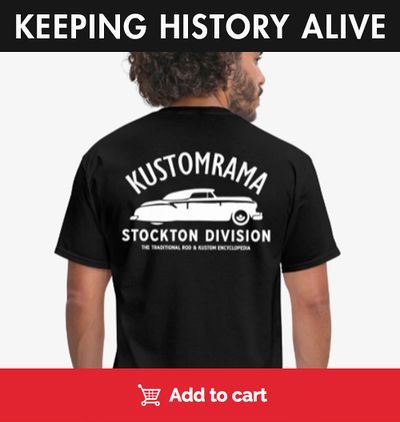 1950 Oldsmobile four-door sedan owned by Cameos of Stockton car club member Donn Conway of Stockton, California. The Olds was Donn's first car, and he bought it from a friend in high school in 1959. When he bought the sedan, it was the stock light green with the stock interior.[1]

Consider the year, 1959. The car was only 9 years old. The body was straight and the engine ran fine. After about a year, Donn had the exterior painted a 1957 Oldsmobile color called AquaMist. The next year or so he decided to make a run to Tijuana, Mexico, for a custom upholstery job. "This was quite common in those days," Donn told Sondre Kvipt of Kustomrama in 2020. "You could drive across the border below San Diego, drive down any street in Tijuana, and find an upholstery shop. No appointment needed. You just drove up, picked the style and colors you wanted, and that day you drove away with the interior completely re-upholstered." Donn went to a shop called Rickey's Auto Upholstery, which was THE place to go in those days.[1]

Donn chose an upholstery color, plus white, that matched his exterior paint. One thing about his trip that was a little different is that Donnʼs father joined him for the drive. I guess his father did not really trust Donn in a town with sort of a sketchy reputation![1]

J2 heads and a 3-carb intake

Later on, Donn added J2 heads and 3-carb intake from a 1957 Olds. According to Donn, the owner needed some cash so they traded parts, with Donn getting the better part of the deal. At the same time, he installed a Clay Smith cam from Vic Hubbard's Speed Shop in Hayward. Soon after that mod he took out the stock hydro and installed a Cad side-shift 3-speed transmission. With the usual floor-shift conversion, of course.[1]

Donn got a set of chromed and reversed wheels for the car from a company in Sacramento in 1961. According to his buddy Garret Walther, "The company forgot to drill a hole in each rim for the valve stem, so when Donn tried to check the air he had to crawl under the car to reach the valve stem!" The same year he also dressed the Olds up with dual dummy spotlights.[2]

Donn then proceeded to scorch the streets of Stockton. In todayʼs vernacular, “he was stylin'!!” !! He also made a lot of passes out at the Kingdon drag strip. He says there were so many Olds hot rods in those days that the drag strip had a special class for them, “OM”, for Olds Modified.[1]

Donn sold the Olds in 1963 to buy a 1962 Ford hardtop. The buyer of the Olds got in a wreck the next weekend and the car was totaled. "A pretty sad end to a very cool car," Garret recalled, "it probably sat in a wrecking yard, with some valuable parts still intact."[2]

Please get in touch with us at mail@kustomrama.com if you have additional information or photos to share about Donn Conway's 1950 Oldsmobile.