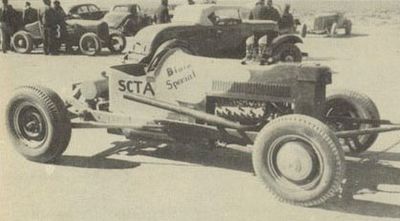 Don Blair of Los Angeles, California was a member of the LA Gophers Car Club. Don was the owner of Blair's Speed Shop in Pasadena, and actually one of the first people to set up a speed shop in Southern California. His success on the lakes before the war gave him a reputation for hot rod ingenuity. Blair was known to stay away from “conventional” engine set ups and would use anything from Roots-type Mercedes Benz superchargers to blown Chevys. Aside from lakes racing, Don was involved sprint car racing and funny cars.

Don is listed as an entrant in the unlimited class at the El Mirage August 18, 1946 SCTA time trials event. He ran as a member of the Gophers car club at the event.[1]

Please get in touch with us at mail@kustomrama.com if you have additional information or photos to share about Don Blair.