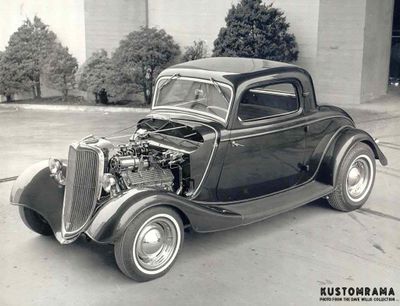 The coupe as it appeared when Peter Sukalac photographed it for Car Craft Magazine at the 1963 Vancouver Pacific International Motorama. Dave usually drove it with the hood on, but he had it off for the show when Pete took the pictures. The photos, and a featured story on the coupe appeared in Car Craft September 1963. Photo by Peter Sukalac, courtesy of Dave Willis. 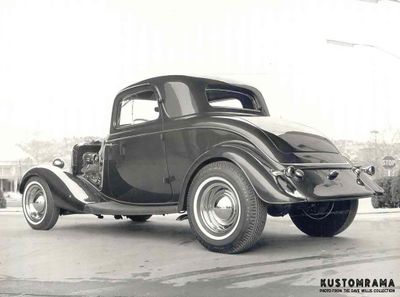 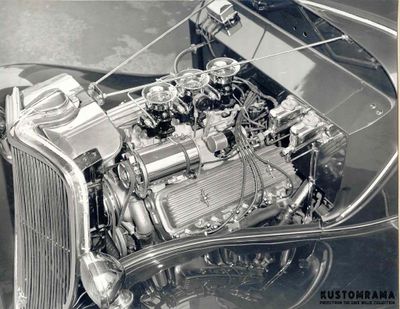 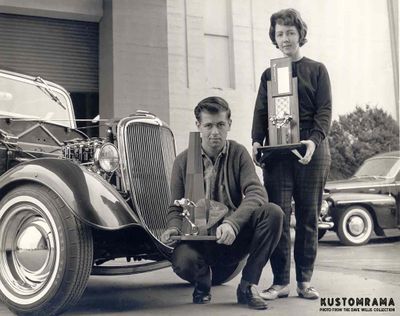 Dave and his girlfriend Sandra McLean with the coupe. Photo by Peter Sukalac, courtesy of Dave Willis. 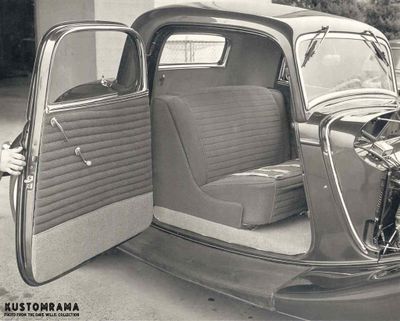 In 2015 Dave told Kustomrama that the door panels in the coupe were not upholstered very well, as they were done in a hurry before a Victoria car show, just before the Vancouver show. Photo by Peter Sukalac, courtesy of Dave Willis. 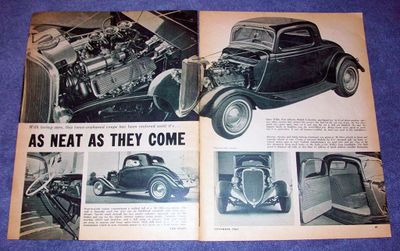 The featured story on Dave's coupe from Car Craft September 1963.

1933 Ford 3-Window coupe originally owned and built by Gary Stermer of Vancouver, British Columbia, Canada. Gary sold the coupe to Neil Mandryk in the late 1950s. Neil got into trouble with the car, and sold it to Dave Willis of Port Alberni, British Columbia, Canada circa 1960. Dave was a founding member of the Alberni Valley Rod and Custom Association in 1955. As the association was leaning more to stock car racing and sports cars, Dave broke out with some friends and founded the Cut-Outs car club.[1]

in 2015 Dave told Kustomrama that Gary had installed a 1956 Oldsmobile crate motor, a 1937 LaSalle transmission and a 1934 Ford rear end before he sold it to Neil; " When I bought it, the car had not been run down. It was a beautiful car and a pleasure to drive, and drive it I did. I added new tires and wheels, and repainted it in a 1958 Ford Burgundy color." Dave spent two years of spare time to get the car to show standard; "It had rounded rumble seat corners, a filled roof and cowl vent, a custom fire-wall, and 1934 Ford hood side panels. The tires were 5.25 x 15" and 8.90 x 15"."[1] Chromed and reversed wheels with hubcaps were installed. The front wheels came from a 1948 Mercury, while the rear wheels were Lincoln. According to a featured story in Car Craft September 1963, the biggest hassle was building the metal filled top. Many hours were spent working it to perfection. It was all hammer-welded, and no lead was used in the installation. A 2 1/2 inch dropped axle was installed up front, while the spring eyes were reversed in the rear. The headlights were from a Willys Jeep.[2]

In 1962 Dave showed the coupe at the Vancouver Autorama. At the show he came 1st in the "Pre-War Coupe and Sedan" class. In 1963 he showed it at the Vancouver Pacific International Motorama, same show but new name. At the 1963 show he came first in the "Street Rod Coupe" class. Peter Sukalac photographed the car at the show. The photos were used in a featured story in Car Craft September 1963; " I usually drove the car with the hood on, but had it off for the show when Pete took the pictures. As you can see in the picture of the car's interior, the door panels were not upholstered very well by the person who did them for me in a hurry before a Victoria car show, just before the Vancouver show, and I had to have them redone properly. Also the car had a rumble seat and area that were never done before I traded the car off." When the coupe was featured in Car Craft September 1963, the engine was basically stock, but it ran an Edelbrock manifold with three carburetors. "After the show I re-installed a rear nerf bar that Gary Stermer had originally built, and added a stock bumper that I had re-chromed along with the bumper irons."[1]

In July of 1964 Dave married his girlfriend Sandra, and he sold his daily driver, a lowered, one owner 1955 Chevrolet Bel-Air, to purchase an engagement ring; "The '33 was not a practical car for daily driving so I tried to sell it without any success because hot rods were not getting much attention or dollars back then. I traded the car off on a new '64 Chevelle Malibu SS that I ordered with a Power Pack 283, 4-speed and Positraction, and got $2000 trade in allowance. The Chevy owner's son, who was a good friend of mine, bought the car and joined our car club."[1]

In October of 2015 Dave told Kustomrama that the car was still around. It had been sold to the United States, and it was in pieces; "The car is safe and dry, but very different from when I had it"[1]

Please get in touch with us at mail@kustomrama.com if you have additional information or photos to share about Dave Willis' 1933 Ford.