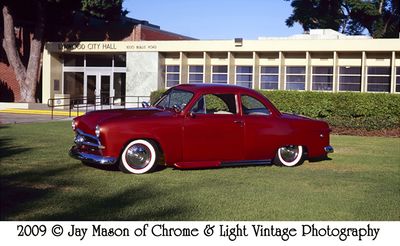 This is how it first looked like in 2007 when Masterson Kustoms was done restyling it. Photo by Jay Mason 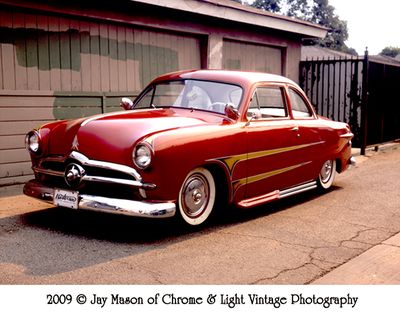 As it appeared after its second paint job. Photo by Jay Mason 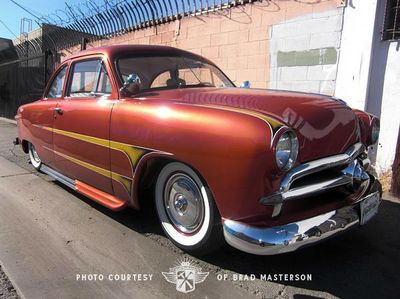 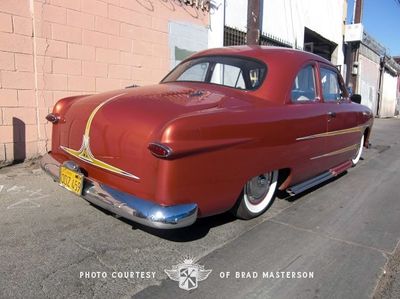 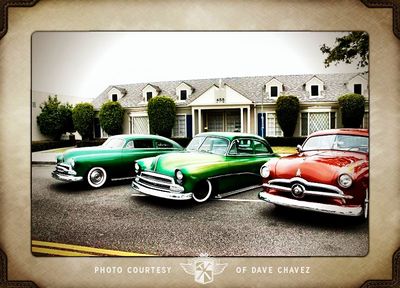 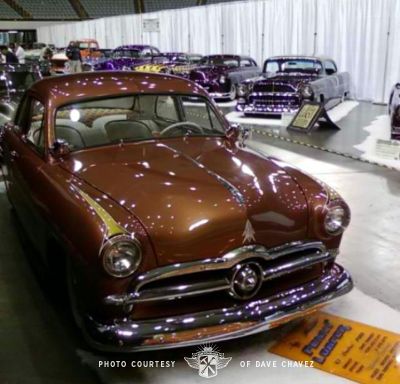 At the Sacramento Autorama, 2010. Photo by Dave Chavez. 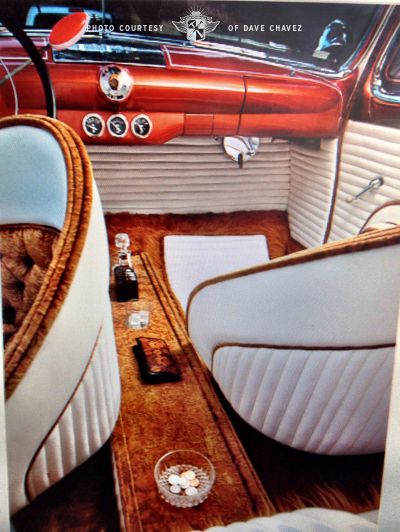 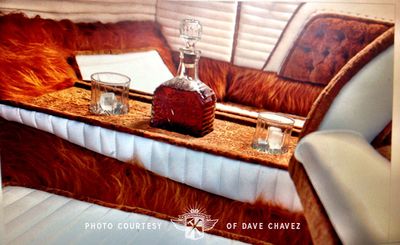 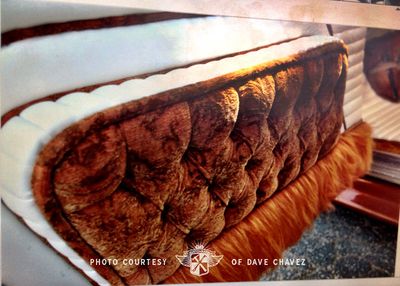 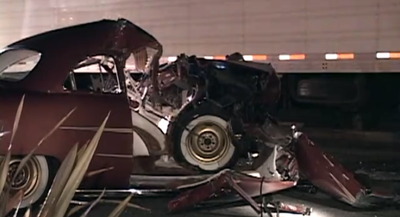 A still photo from the newsflash about the accident, October 10th, 2010. [http://www.youtube.com/watch?v=qUn9cyYlcvw Click here to watch the full video 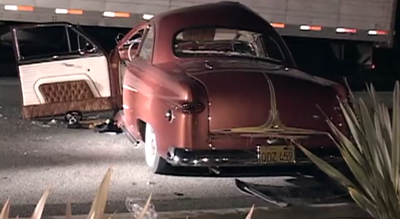 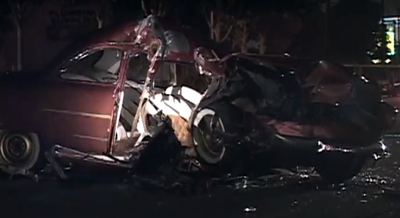 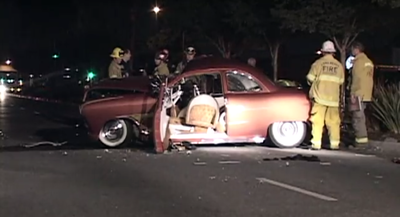 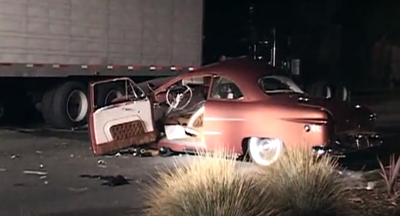 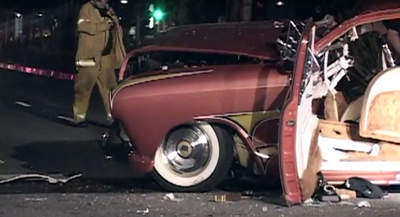 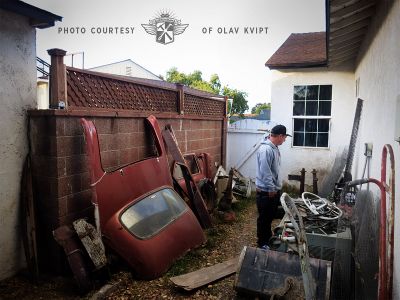 Autumn 2013. Brad Masterson looking over the remains of what once used to be the Penny Loafer. Photo by Olav Kvipt. 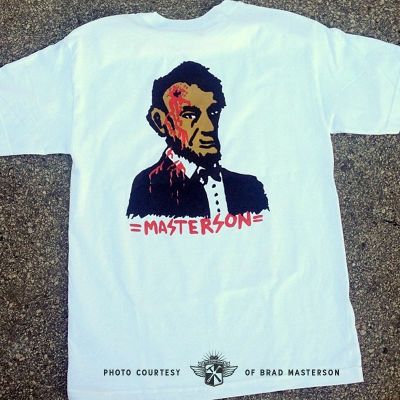 Brad Masterson made these to fund the materials for Dave Chavez' 1947 Mercury.

1949 Ford restyled by Brad Masterson of Masterson Kustom Automobiles for Dave Chavez of Lakewood, California. Dave bought the car in 1989 when he was 20 years old. The car was by then primered white with white walls on red steelies. The car had been in California its whole life, and Dave was the lucky third owner. He started off by lowering it, and used it as his daily driver. In 2006, Dave passed by Brad Mastersons house in Paramount on his way to work. He noticed that Brad always had a bunch of old cars outside his residence, so he stopped by one day to take a chat about old cars. Once Dave found out he restyled cars he ordered him to customize his shoebox. He always wanted a chopped car. Brad told him "every other custom shoeboxes are chopped, do something different and let the coupe top alone".[1]

They began by fixing all the cancer on the car outside Brad's house. Brad frenched the headlights, using a set of 1952-1954 Ford rings. Rod & Custom May 2008 showed a how-to-do from when Brad did the headlights. He also molded the rear fenders before he opened up his own shop at the old Barris Kustoms premises in Lynwood. Once it was brought to the shop, Brad molded in a set of dual molded sidepipes on each rocker, which is shown in Rod & Custom May 2008. The hood and deck lid was shaved for unnecessary chrome to appear a cleaner appearance. The door handles were kept, hence they were one year only like the refrigerator handle, and every other shoebox had them removed. Many people actually wondered what car those handles were from, and got quite amused when they were told them were stock. The windshield was v-butted, and dummy spotlights were installed. When it was done, they would design the paint. The idea was to keep it like a mild 1950's custom that a high school kid could afford in 1955, so the trick was to not over exaggerate. They first thought about paneling it similar to a Watson paint job. As soon as they applied the white basecoat and begun to mask off the panels, they realized it was creeping into a different era from what Dave wanted. Dave saw a bike gas tank that Brad painted for Bucky Crispin, and he decided right there that he wanted his car in the same color. Brad mixed up his custom Persimon Luster red, and applied three coats over the body, and highlighted the window frames, dashboard, inside the grille and gravel pans with brighter tone. The shoebox was then upholstered in pearl white tuck & roll with chrome piping by Carlos Moraga of Los Angeles. The carpet was grey, piped in white. When it came back from the upholstered, they were not impressed by the design. They were thinking the interior would really put the finishing touch on the car, like a authentic 1950's tuck & roll interior. 1953 Ford hubcaps were installed, modified with a gold center backing plate from a mason jar lid, with a chrome bullet. Attending its debute at Ventura Nationals, the original inline six gave up and died. Rudy's Automotive at 11054 Atlantic Ave. installed a later model Ford straight six engine, which gave plenty of performance and re-ability.[1]

Dave did not have much time to enjoy the car before a strange happening occurred. One summer day in 2007, Brad headed over to Dave's house to show it to some friends of his. Dave had just washed it and left in his driveway. When Brad arrived, there was a large crowd of people around the car. Impressed by the number of people admiring the car, Brad knew he had designed a nice custom. As he came closer, and the crowd disparaged, he noticed severe damage caused by a baseball bat. It turned, Dave's 85 year old neighbor lady, suffering from dementia was convinced Dave, being the only hispanic, was stealing her underwear and cable television, moving vases around to show he was there. So she took the case in her hands and used the Louisville Slugger and beat the shit of his car, denting every panel, spotlights, hubcaps, smashing the windows, taillights and headlights. All this happened during the day while Dave was at work.[1]

They settled out of court for $2500, and brought it over to the shop to repair the car. The body was then straightened, and re-painted it in a matching color of the first custom mixed one. Danny Sousa in a nearby body shop applied the basecoat, and Brad quickly applied gold scallops with black tips. Brad then applied the clear, and outlined the scallops in white to finish it up. It was after this paint job, the car was named the "Penny Loafer". Hence the name, Brad made a figure of Abraham Lincoln on the deck lid, inside the scallop. 1953 Mercury hubcaps were also installed. The garnish moldings were sent to the chrome shop, and Juanito, an illegal mexican across the street of Brad's shop re-did the upholstery. Brad brought him over to Bill Hines to show him the Buddah Buggy. No problem he said, and a similar interior was made. The swivel seats were originally made from cardboard trash can barrels, covered in copper and gold floral frieze with white vinyl. The car took top honors at every show it went to, and it really captured a mild custom car that could have hit the streets of Los Angeles in the mid-1950's.[1]

On October 10, 2010, Dave was on his way home from a car show in Lakewood. He'd won a prize at the show for the best time period correct custom, and went home at midnight. Driving down Paramount, he fell asleep and hit a parked truck at Paramount and 68th St. The truck was heavy loaded with washing machines, and did not move a budge, so it was almost like hitting a wall. Due to the swivel seats, Dave and his passanger swung to the sides, aiming them away from center of the car. The investigation made by the Highway Patrol, determined that the seats most likely saved their lives. The 235 cid. Straight six engine was relocated to inside the passenger compartment, along with the front suspension. The car was completely totaled, and was considered lost. The remains of the car was taken to Dave's house, where Brad and Janne Lepola dissambled the parts worth saving. The upholstery is intact, and the rest of the car is resting in Dave's backyard.[1]

When Dave got up on his feet again, he decided to let Brad build him another custom, this time a 1940s custom. He got hold of a 1947 Mercury, and made once again Brad build him a trophy catcher.

Please get in touch with us at mail@kustomrama.com if you have additional information or photos to share about Dave Chavez' 1949 Ford.