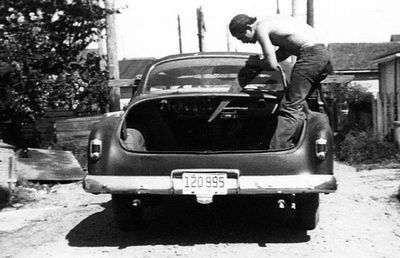 Jack Williams chopping the top on the car with a hand saw. According to Cort Elliot, Jack was a highly skilled craftsman, and he preferred using hand saws with teeth recut and ground to cut sheet metal without any distortion so reassembly in the chopped formation could be completed (all hammer—welded) so the finished surface was “seamless’ both inside and out. While the car was displayed at the 1962 Seattle Worlds Fair Show, the judges were quoted as saying “this car displays the finest bodywork they have ever seen”. Photo from The HAMB. 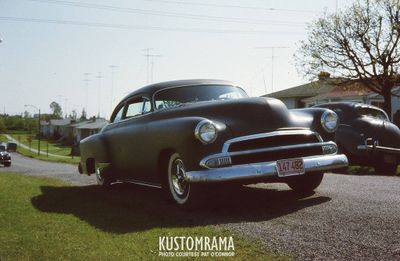 An early flat black version of the Chevrolet as it appeared before Jack Williams restyled the front end for Cort Elliot. Photo courtesy of Pat O'Connor. 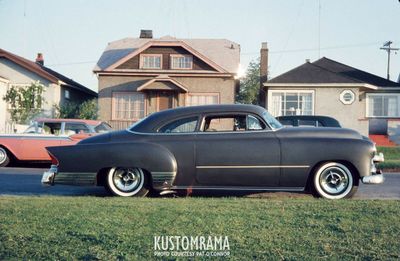 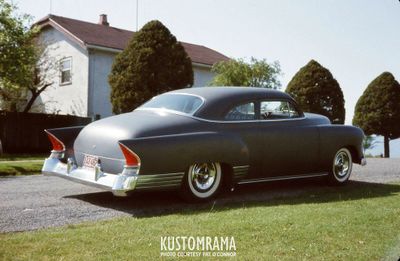 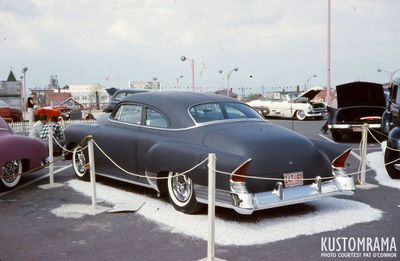 The first version of the Chevrolet at an outdoor car show. Photo courtesy of Pat O'Connor. 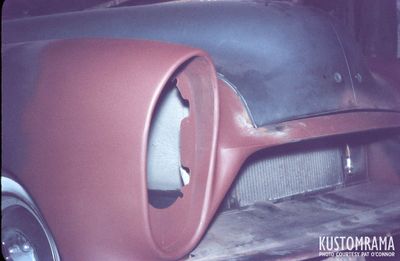 Cort suggested that they should add 1958 Lincoln canted quad headlights to it. He got the idea at a restaurant. He drew it on a napkin and brought it to Jack telling him that he wanted canted quad headlights on the Chevy. During the same operation, the grille opening was molded in, and a tube grille installed. The hood corners were rounded, and a riser from an early 1950s Chevy was installed on the stock front bumper. Photo courtesy of Pat O'Connor. 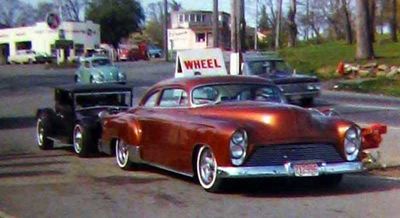 The second version of Cort's Chevrolet in front of Cliff Richs T Coupe.[1] 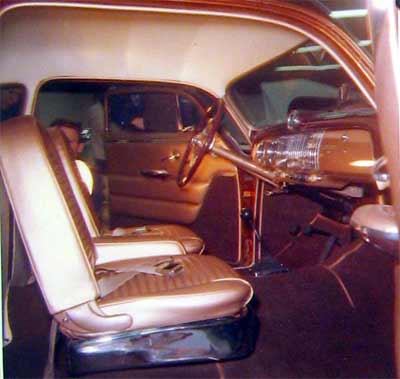 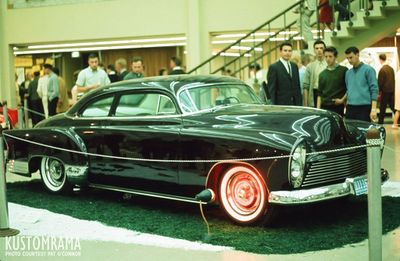 A Ruby Maroon version of the car. Photo courtesy of Pat O'Connor. 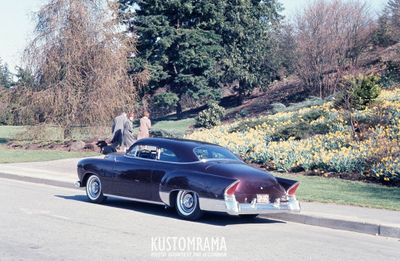 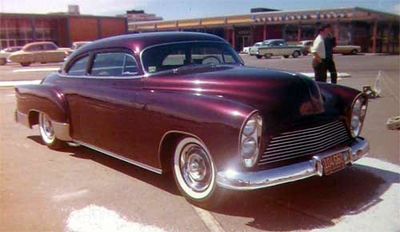 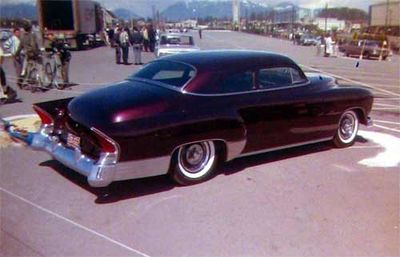 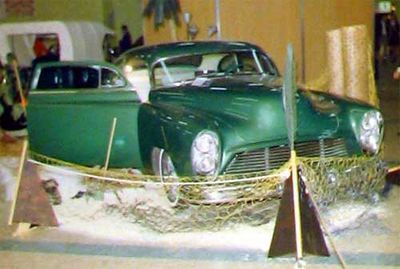 After Bruce Metcalf bought the car, he had it repainted green. [1] 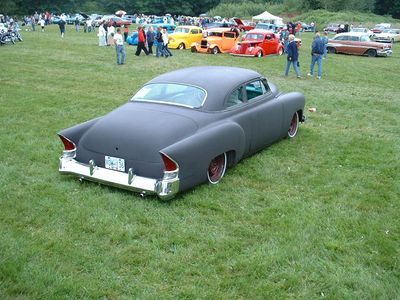 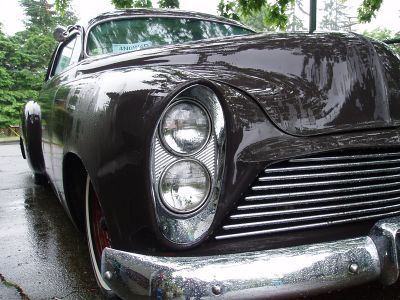 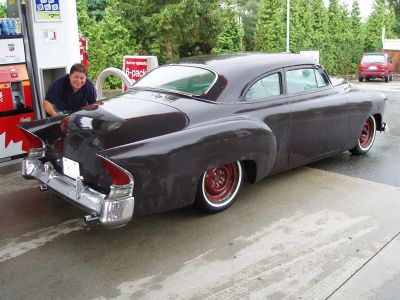 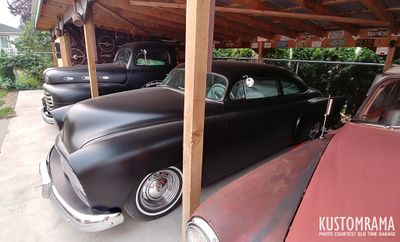 Terry's Chevrolet as it sat in September of 2017. Photo courtesy of Old Time Garage. 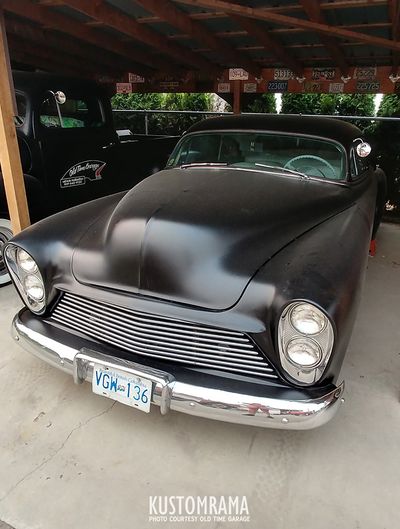 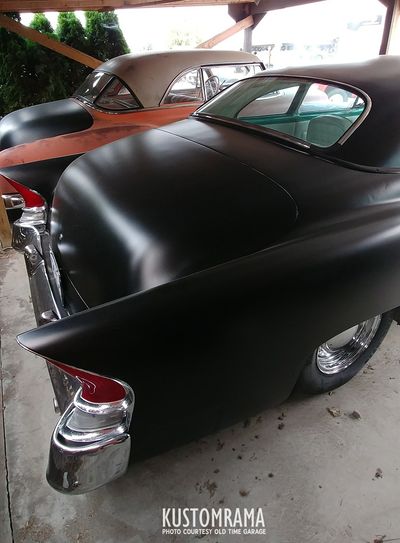 1951 Chevrolet originally owned by George Wozniak.[2] The work on the car was originally started by George Wozniak in 1959 when he approached Jack Williams about restyling the car. In 2017 later owner Cort Elliot told Kustomrama that early in the project, rust was discovered in a few areas, "so George and Jack decided to "start" from scratch by removing all rusted panels and replace with new factory parts from GM."[3]

Cort remember that Jack Williams was very selective in taking in taking on projects; "Although young, Jack had established himself as a highly skilled craftsman in bodywork and precision mechanical fabrication. "Having built the first Syndicate Scuderia A gas dragster, he fitted it with a fully enclosed aluminum body -after teaching himself how to form and weld aluminum panels using only gas welding equipment technology available in the late 1950s. The dragster went on to be considered by many the most beautiful dragster ever built. As Jack’s skills were highly regarded by many in the dragracing and hot-rod field, he could be very selective in taking on any projects that he found interesting or challenging. “If no one else can do it, ask Jack if he is interested in doing it!”."[3]

After all rusted panels had been repaired and replaced, Jack could finally chop the top on the car. "Jack preferred using hand saws with teeth recut and ground to cut sheet metal without any distortion so reassembly in the chopped formation could be completed (all hammer—welded) so the finished surface was “seamless’ both inside and out," Cort remembers. "This same high-level craftsmanship was shown for all other body modifications, taillights, headlights, grille, and more, along with the stepped rear frame for more clearance over the rear axle as the car rode 3 inches lower than stock." The quarter panels were then extended and modified to accept Packard taillights before Jack installed a 1956 Chevrolet rear bumper. A piece of side trim was made and installed in front of the rear bumper. The trim-piece was made to match the original trim in front of the rear wheel well opening. Other modifications at the time included shaved handles and emblems.[2]

During the build, George fell in love with a girl and got married, so he had to sell the car. He sold the in-progress custom to Shifters member Cort Elliot of Vancouver, who saw the potential in the car. Cort told Jack that he wanted him to continue restyling the car. Cort suggested that they should add 1958 Lincoln canted quad headlights to it. He got the idea at a restaurant. He drew it on a napkin and brought it to Jack telling him that he wanted canted quad headlights on the Chevy. During the same operation, the grille opening was molded in, and a tube grille installed. The hood corners were rounded, and a riser from an early 1950s Chevy was installed on the stock front bumper. Inside, Cort installed 1959 Ford Thunderbird seats. It was also reupholstered in white.[2]

In 1962 Cort took the car to an indoor car show, where it won. The same year he also brought it to the Portland Roadster Show, where it also won. After that, he brought it to the World's Fair in Seattle, where it won again. While the car was displayed at the 1962 Seattle World's Fair, Cort remember the judges saying "this car displays the finest bodywork they have ever seen." The car landed a featured story in Car Craft Magazine. The article was named "Carried Away" due to the scope of the custom building project. In 1963 the car was nominated as one of Car Craft Magazine's Top 10 Customs of 1963.[2]

Cort eventually sold the car to Bruce Metcalf. Bruce, who owned it in 1964, changed the wheels and repainted it a Corvette green color, and continued to win trophies with the car. Cort ran a tonneau cover over the back seats, and he never installed back seats in the car. When Bruce bought it, he made rear seats out of wood that matched the Thunderbird seats. Bruce owned it for a while and showed it before he eventually got rid of it.[2]

The car disappeared for a while before it suddenly appeared at a car lot. From the car lot, it wound up at a service station. In 1973 Terry Kong sees the car at the service station. By then it has a blown transmission. Terry knocks on the door and asks the fellow at the service station if he wants to sell it. He names a price, and Terry told him he would be back with the money. Every time Terry stops by, the guy is not around. One day he passes the station and sees that the car is gone. It is buried in snow, so Terry runs home to grab a shovel and dig it out. The owner comes down and asks him what he is doing. He tells him he has to get the car out of the snow. He then runs home, get the money, and returns to pay the owner. When Terry purchased the car, the front end had been damaged. Terry got the car back on the road and drove it around for some time. He kept it as it was, and for many years he didn't change anything on it. One day he brings it to Old Time Garage to get it running again. The car is then sanded down and painted flat black.[2]

In 2017 Old Time Garage was in the process of resurrecting the car to its former glory for Terry Kong. In September of 2017 Old Time Garage told Kustomrama that they are doing the restoration as a surprise for Terry, as he had a stroke and is paralyzed on his left side; "Terry doesn't know we are going to restore it for him yet." The plan is to restore it back to the Burgundy version from 1964.[4]

Please get in touch with us at mail@kustomrama.com if you have additional information or photos to share about Cort Elliot's 1951 Chevrolet.