From Kustomrama
(Redirected from Chopstick Special)
Jump to: navigation, search 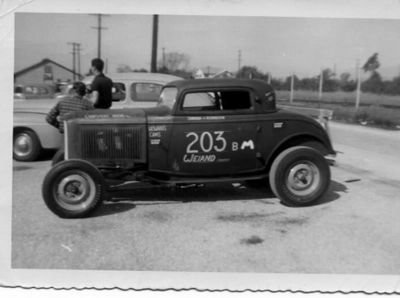 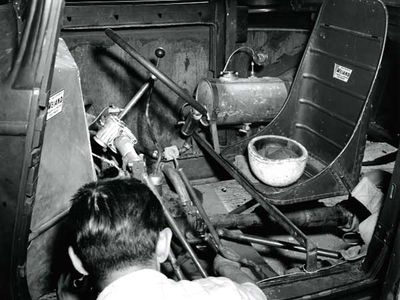 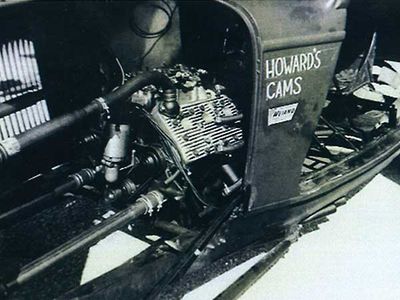 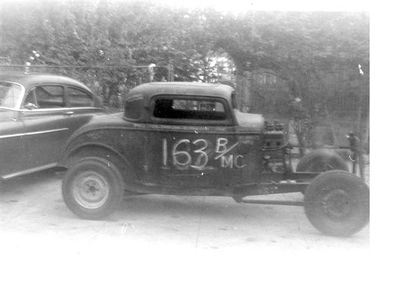 The Chopstick Special as it sat right after Don Montgomery bought it. In the photo Don has installed the GMC engine.[1] 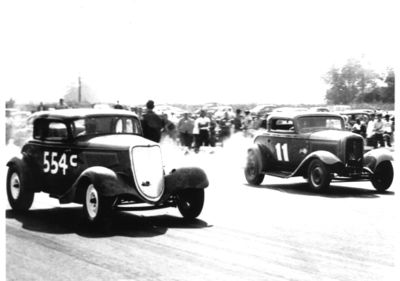 Don Montgomery racing Gene Mooneyham at the 1954 NHRA So Cal Championships. His winning ET was the fastest A/F Coupe time at any NHRA meet that year.[1] 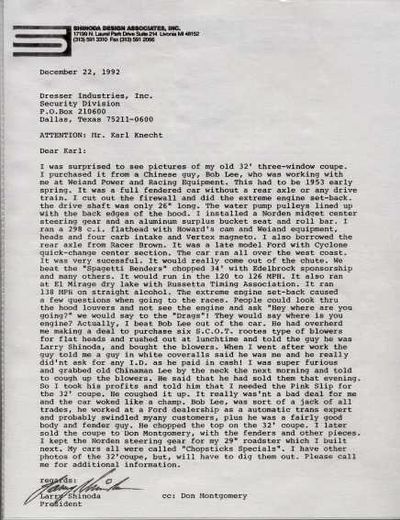 A letter from Larry Shinoda dated December 22, 1992. The letter was written after the car was found and identified.[1] 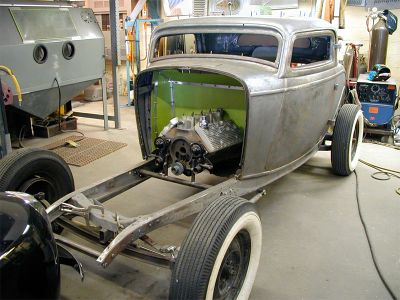 The Chopstick Special at Custom Auto in Loveland, Colorado.[2] 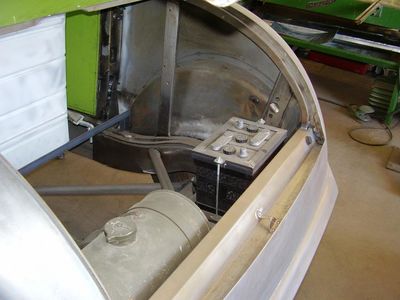 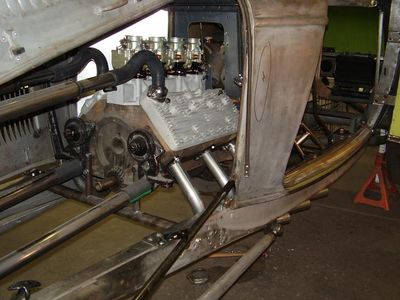 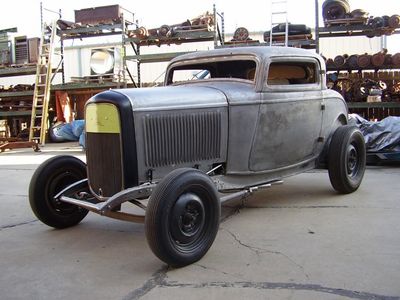 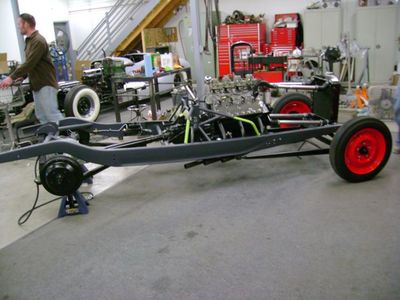 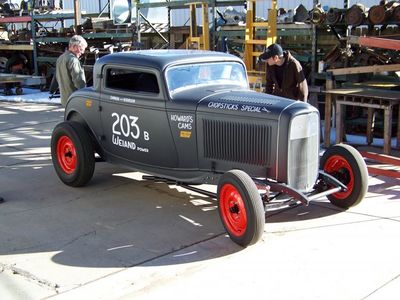 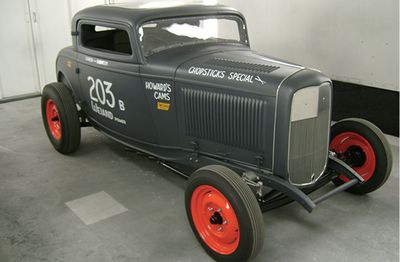 The car as it sat after it was restored by Custom Auto. 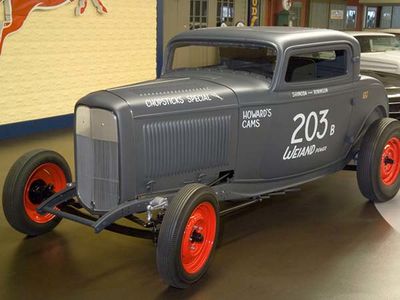 The Chopstick Special at 3Dog Garage 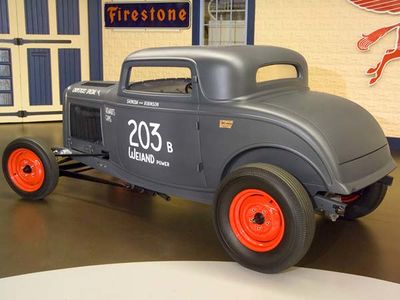 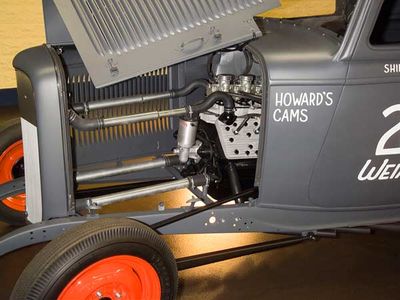 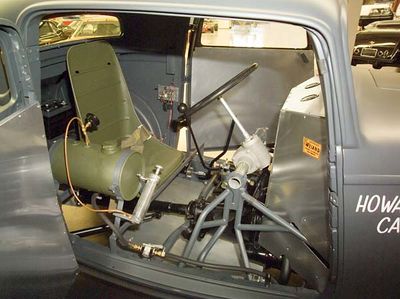 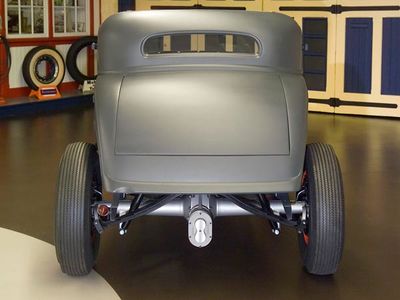 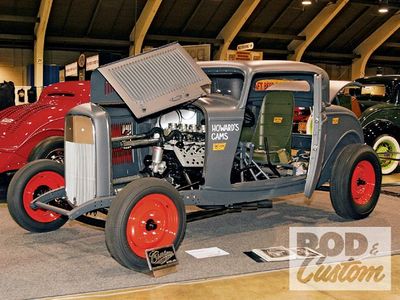 The Chopstick Special at the 60th Grand National Roadster Show in 2009.[3]

1932 Ford 3 Window coupe originally owned and raced by Glendale Coupe & Roadster Club member Larry Shinoda as the "Chopstick Special". [4] Larry got the car from a Chinese guy named Bob Lee in the spring of 1953 while he was employed by Phil Weiand. Bob was also an employee at Weiand Power and Racing Equipment and Larry beat him out of the car after Bob had struck a deal behind Larry's back. Bob had overheard Larry making a deal to purchase six S.C.O.T. Roots-type blowers for flatheads V8's. Eager to earn some bucks, Bob rushed out out at lunchtime and told the guy with the blowers that he was Larry Shinoda, and bought them all. After work, when Larry went to pick up the blowers the guy told him that a guy in white coveralls had told he was Larry and bought them. Larry became furious and the next morning he grabbed old "Chinaman Lee" by the neck and told him to cough up the blowers. Bob had already sold them, so Larry took his profits and told him that he needed the Pink Slip for the '32 Coupe he had. When Larry bought the car it was a full fendered car with no drive train. Bob Lee was a body and fender man, so he chopped the top for Larry. Larry wanted to drag race the car, so he cut away most of the firewall and placed a 298 flathead V8 as far back in the chassis as possible, seeking optimal weight distribution at launch. The engine was hopped up featuring a Howard's cam, Weiand heads, a four carb intake and a Vertex magneto. The drive shaft from the transmission tailshaft to the quick-change rear end was only 26" long and the water pump pulleys lined up with the back edge of the hood. Larry borrowed the rear axle from Racer Brown; it was a late model Ford with Cyclone quick-change center section. Larry installed a Norden midget center steering gear and an aluminum surplus bucket seat and roll bar in the coupe.[5] The car ran all over the West Coast, and it was clocked at over 120 mph in the quarter. At El Mirage the car reached 138 mph, running on straight alcohol.[6]

In late 1953 Larry sold his Coupe as he wanted to build a roadster. The coupe was sold to fellow Glendale Coupe & Roadster Club member Don Montgomery who wanted a lighter car for drag racing.[1] Larry sold the car with the fenders and various other pieces, but kept the Norden steering gear for his 1929 Ford Roadster.[5] Racer Brown's Cyclone Quick Change axle had been replaced by a stock banjo rear end when Don got the car. Don Montgomery installed a Howard 12 port GMC engine with a Buick trans to run in the A Fuel Coupe class. Don painted the coupe blue and added fenders as required. By 1954 the car had run 121 mph, set numerous records and even won a couple of Top Eliminator trophies. The number 11 was Dons Rusetta's number for the 1954 season, but because he concentrated on drag racing, the car didn't run at the lakes after 1953. As Don saw that the Chrysler engines were coming, he installed a 331 SCOT blown Chrysler engine in the coupe in 1955. The best time in 1956 was 133 mph. The coupe won almost all of its races and again got a Top Eliminator trophy. In 1957, the Fuel Ban gave Don no place to run, so he sold the coupe. He tried to trace the car years later, but lost it somewhere in Los Angeles in 1973.[1] In 1992, the car was found and identified.[2]

Dave Crouse and his crew at Custom Auto of Loveland, Colorado restored the car back to its 1953/1954 configuration for its owners Ross and Beth Myers.[4] Cyclone Racing Equipment supplied the replacement quick change rear end section for the restoration.

Please get in touch with us at mail@kustomrama.com if you have additional information or photos to share about Larry Shinoda's 1932 Ford.