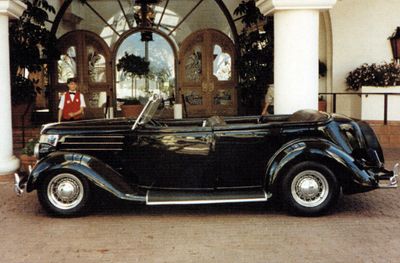 This photo of the Ted's Phaeton was published in The Rodder's Journal in 2008. The caption listed old info about the car, claiming that it might have been an original and rare humpback phaeton from Ford. Being an old archive photo, it shows the original chocolate brown upholstery that sat in the car when Ted bought it, and the Dodge wire wheels. Photo courtesy of Steve McMullen. 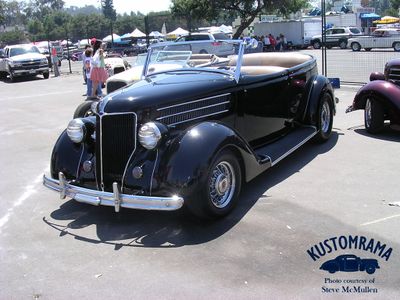 A photo of Ted's Phaeton at the 2006 LA Roadster Show. Photo courtesy of Steve McMullen. 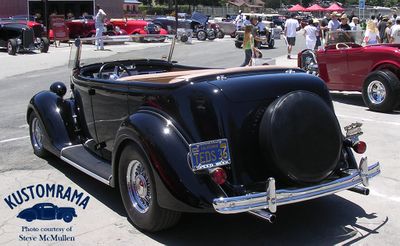 This photo shows the 1940 Ford dash that Ted and Steve installed in 1992. Photo courtesy of Steve McMullen. 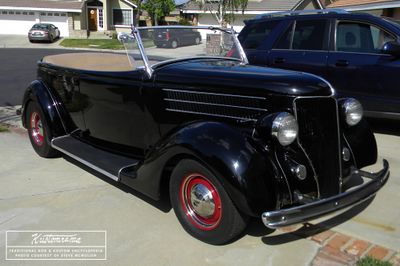 A photo of the Phaeton taken in 2020. Photo courtesy of Steve McMullen. 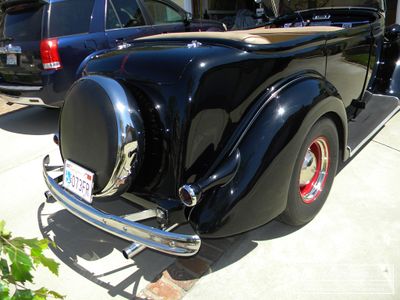 1936 Ford Phaeton owned by Bart Bartoni. Bart's Phaeton was restyled by Bart and Gene Winfield in Gene's chicken coupe shop in the 1950s. A four door sedan trunk was grafted on the rear end of the car.

Ted McMullen bought the Bartoni Phaeton in 1971. He saw it for sale at the 1971 Buellton Roadster Round-Up. A guy from out in the Valley owned it, and Ted worked out a trade for cash and work on another car. The seller told Ted that the car came from the San Francisco bay area. He didn't know who had added the trunk to the phaeton, but Ted could see that it was done well. Ted contacted the Ford Archives about it, and they responded with a vague "...we may have made some as parade cars..." In 1974 Rob Clark was wiping it down at the LA Roadster Show when the mystery was solved. A gentleman was looking it over and he told Rob that he had built it for a fellow from the Bay Area. All the info clicked, and the gentleman introduced himself as Gene Winfield.[1]

When Ted bought the car in 1971 it had American mags. These were replaced with 1954 Dodge wire wheels. The car did also come with a chopped windshield. Tired of getting bugs in the forehead, a stock height windshield was installed.[1]

The original chassis was a bit twisted, so in 1992 Ted and his son Steve did a complete redo, swapping it for a better 1936 Ford frame. DIsk brakes were added to the front end during the conversion, while a Lincoln Versailles rear end was installed in the rear. Being a purist, Ted did not want to cut the frame to allow easy install of a more modern 350 Chevrolet engine and 350 transmission. The front end axle and springs were kept original 36. To allow disks, the 1954 Dodge wire wheels were replaced with McLeans wires. Inside, Ted and Steve installed a 1940 Ford dash.[1]

Please get in touch with us at mail@kustomrama.com if you have additional information or photos to share about Bart Bartoni's 1936 Ford.