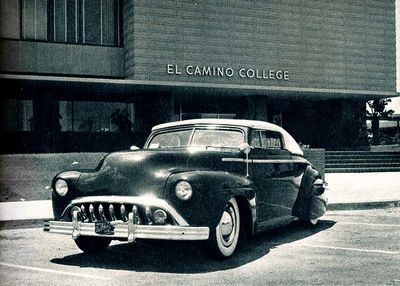 Al's Ford as it appeared when it was featured in Hop Up And Motor Life Magazine June 1953. Photo by Gene Trindl.

To get the right stance, Al's Ford was lowered seven inches all around. Barris Kustoms performed the rear chassis channeling, while Al installed a dropped axle up front himself. Photo by Gene Trindl. 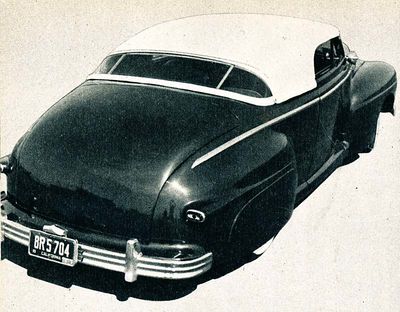 The sloping top, featuring a wraparound windshield, was made by Louie Chavez at American Auto Tops. Photo by Gene Trindl. 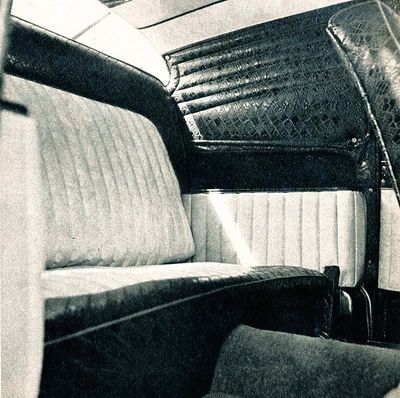 Louie did also upholster the underside of the top. Photo by Gene Trindl. 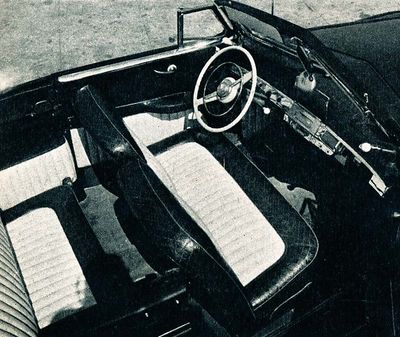 According to Al, the interior upholstering was done by the top upholsterers of the time; the Carson Top Shop. The interior was a combination of pleated leatherette and imitation snake skin. Photo by Gene Trindl. 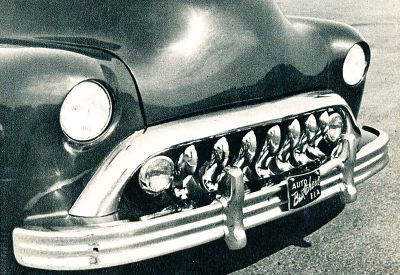 Al and Harold Blake restyled the front end on the car. Al took the hood off and made a channel iron frame with the new shape. He then took the car to a metal forging shop, were a new hood was forged. Next step was to redo the grille. Al bought a gravel guard and the front "teeth" from the new 1951 DeSoto that had just come out. After installing that he attached a 1951 Oldsmobile top grille bar over the top. The grille was fit with parking lights on each side befiore Harold fitted the hood to the car and the new grille. Photo by Gene Trindl. 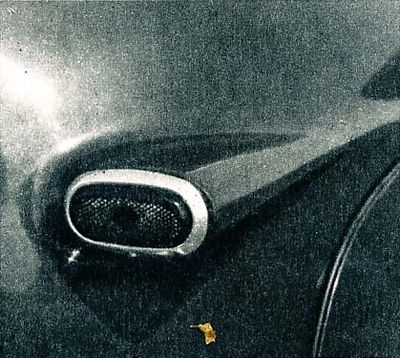 The taillights were molded to the fenders. Photo by Gene Trindl.

1948 Ford Convertible owned by Al Garcia Nunez of Southwest Los Angeles, California. Al bought the car in 1950. He was 20 years old at the time, and when he got it, it was an absolute cherry black convertible. "My dad owned an auto body & paint shop in Southwest Los Angeles. It was called National Auto Works. He did work for all the new and used car dealers along Figueroa St. which at that time was automobile row in Los Angeles. I grew up in that shop, so I thought I knew something about dolling up a car. This was my second car. The first was a 1937 Ford Coupe which I painted and had re-upholstered. The metal man at my dad's shop was Harold Blake, a heavy drinkin' black man I had met before as a child when he worked for a used car dealer near where I lived. We closed the shop about noon on Saturdays, that's when I would work on the 1948 Ford. Harold also stayed working late. He became interested in what I was doing and started to help me. As I went along I learned too. Little by little the car took shape. We pruned the hood ornament and shortened the long side moldings. Next we "frenched" the fender seams and rear gravel guard. Of course the car had to be lowered, and I ended up talking to George Barris, at Barris Kustoms, who did the rear chassis channeling. Next I had the front axle re-forged, "dropped." I did that installation. Next came chopping the front windshield. Barris overcharged me for the channeling job so I was anxious to do business with him again. That is when I looked up Gil Ayala at Gil's Auto Body Works. I liked him, we were both of Mexican descent, we got along well and he helped me with ideas for the car. He gave me the East Los Angeles Auto Butchers plaque which I used as a front license plate. " Gil chopped the windshield for Al around 1952 or so."The sloping top was made for me by Louie Chavez at American Auto Tops. He also did the underside of the top. The interior upholstering was done by the top upholsterers of the time, the Carson Top Shop. They were close to my Dad's shop. After that I decided to take the customizing all the way. I bought a dashboard off of a Kaiser that I adjusted to fit the Ford. The dash was also upholstered. Then I took the hood off and made a channel iron frame with a new shape. I took the car to a metal forging shop, and they forged a new hood. The next step was to redo the front grille. I bought a gravel guard and the front "teeth" from the new 1951 DeSoto that had just come out. After installing that I attached a 1951 Oldsmobile top grille bar over the top. Then Harold Blake fitted the hood to the car and the new grille. It all looked great. Last but not least, I took deep recessed Ford headlight rims, cut them to a taper, then "frenched" them in. It was a novel look. Two years later that style came out on several new cars. I would like to think I had something to do with that," recalled Al in 2014, at age 84.[1]

Al's convertible was featured in Hop Up And Motor Life Magazine June 1953. According to that story, the top was chopped 5 inches, and all the pieces for the window frames were joined together and sent to the chrome shop. The story claimed that Gil Ayala did most of the bodywork and design on the car, including the restyled front. This was not the case. "I only had contact with Gil Ayala. Yes, we talked some about different ideas, but after the windshield work I did the rest. He was a helpful guy. The windshield frames were actually stainless steel. After the windshield glass was in, he cut the frames to fit. He actually gas welded them together, filed them smooth and buffed them to a polish. Great job. I did all the priming, sanding and prep work on the car. The painter was Ernie Escontrias, the painter at my Dad's shop."[1] Ernie finished the Ford off in Emerald green lacquer. The grille featured parking lights on each side. The door handles were removed, and the chrome side strips were extended to cover the holes, a typical trick used by restylers for a long while. They did not add another section to the strips, but purchased a quarter panel chrome molding for the same make and model of the car, cutting it to the length of the door. The doors on Al's Ford was opened electrically. The deck lid was shaved as well. The stock bumpers were replaced by 1949 Plymouth units. The license plate was relocated to the bumper, and illuminated by an accessory light. Fender skirts and dual spotlights were added. The interior by Carson Top Shop was a combination of pleated leatherette and imitation snake skin. To get the right stance, it was lowered seven inches all around, moon-type discs wrapped up the style. The total cost of restyling, interior and top on Al's Ford was $1900 according to Hop Up And Motor Life Magazine June 1953.[2]

Please get in touch with us at mail@kustomrama.com if you have additional information or photos to share about Al Garcia's 1948 Ford.