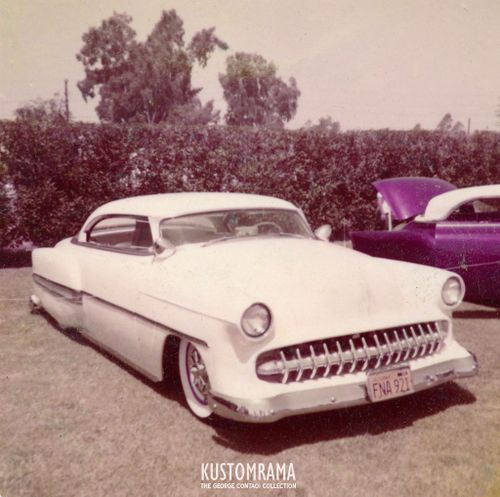 Duane Steck's 1954 Chevrolet Bel Air "Moonglow." Duane was a member of the Long Beach Renegades, and his backyard built custom is widely known as the "Moonglow". The first version of the "Moonglow" was completed in 1956, and it gained national recognition when it was featured on the cover of the January 1957 issue of Car Craft Magazine. Mid 1957 Duane was busy restyling the car, and it received a new grille opening. The rear was also modified slightly before Larry Watson gave it a white enamel paint job with pinstriping. The second version, seen here, never made it to any magazines as far as we know. Shortly after the Renecades show the car was restyled again, and it received a silver metallic nitro lacquer paint job with scallops by Watson. Photo from the George Contaoi Photo Collection. 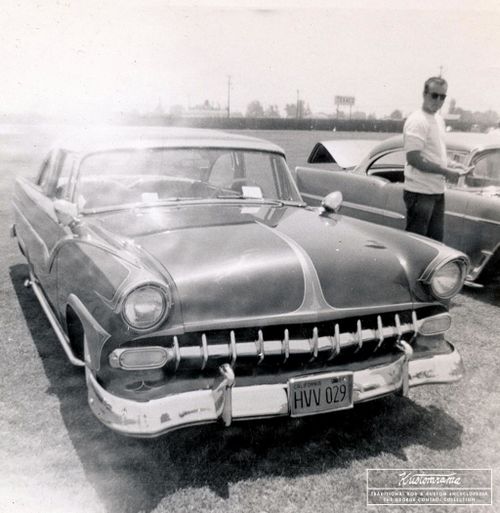 A photo of Bill Burnett's 1955 Ford Crown Victoria taken at the 1957 Long Beach Renegades Car Club Renecade. Bill was a member of the Renegades, and it is a little unclear who actually restyled his car. According to old magazine articles, the work was performed by Barris Kustoms, Dick Williams, and Schelhaas Custom Shop. The car ran a 1954 Chevrolet grille that had been fitted with extra teeth. It was also nosed and decked, and the headlights had been frenched. Dean Jeffries scalloped the car in gold before he decorated it with pinstripes on the body and dash. Later on in 1957 Bill sold the car to Larry Quatrone. Larry paid $1800 for the car. As he was only 15 years old at the time, it sat in his backyard until he turned 16 and had a driver's license. Larry told Sondre Kvipt of Kustomrama that he believes that it was his father that really wanted the car! The Renegades used to hang out at a house at the corner of Willow and Studebaker, two blocks from Larry's house, and as a little kid, he loved to go over and look at the cars when they were parked outside. Photo from The George Contaoi Photo Collection. 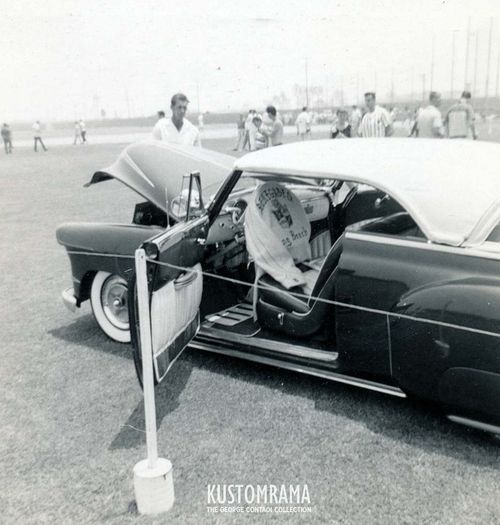 A photo of Santo Vasques' 1950 Chevrolet Convertible taken at the 1957 Long Beach Renegades Car Club Renecade. Santo's Chevrolet was restyled by Schelhaas Custom Shop. The first iteration of the car, found on the cover of Car Craft May 1957, was painted Tahitian Red with gold pinstriping by Larry Watson. Later on in 1957 it received a wild scallop paint job by Watson. Larry later claimed that this was the most radical scallop paint job he did that year. If you look closely at this photo, you can see that the car has received a scallop on the hood. A rare photo of this car. Photo from the George Contaoi Photo Collection. 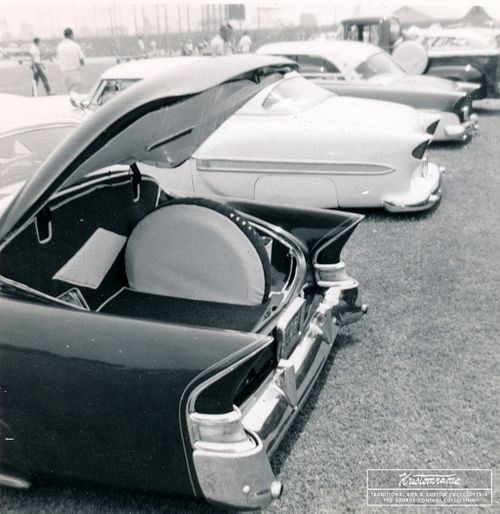 A trunk shot of Santo Vasques' 1950 Chevrolet Convertible taken at the Long Beach Renegades Car Club Renecade. The 1956 Packard taillights look right at home on Santo’s Chevrolet. When the Renegades won the 1958 Car Craft Car Club of the Year Award Santo had become President of the club. Duane Steck's Moonglow, Pete Angress' 1952 Ford, and Jud Morgan's 1956 Ford F-100 can be seen behind Vasques' Chevrolet in the photo. Photo from the George Contaoi Photo Collection. 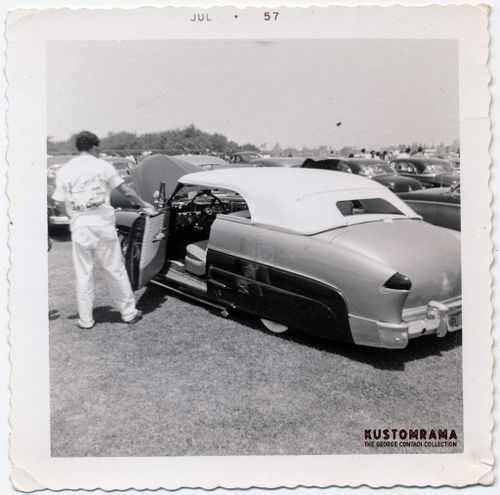 Mandy Holder's 1951 Mercury convertible. Mandy was a member of the Knucklebusters of Springfield car club of Springfield, Illinois. Photo from the George Contaoi Photo Collection. 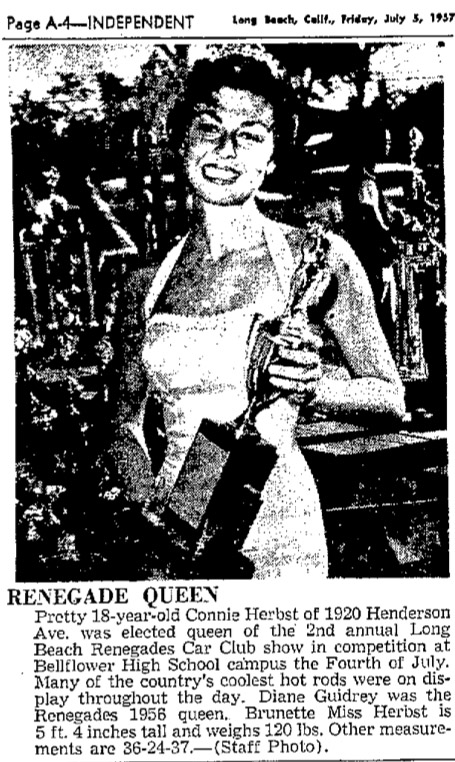 The 2nd annual Long Beach Renegades Car Club Renecade was held Thursday, July 4 on the grounds of Bellflower High School. A whopping turnout was anticipated before the show, with registered entrants from as far as way as San Diego and the Bay Area. All entrants competed for class trophies as well as a gigantic 56 inch high affair that was given out to best in show. The show contained classes for full, semi, moderate and mild customs, best constructed car, best presented car club, street roadsters, street coupes and sedans, competition speed cars, club participation, special class,sports cars, antiques, pickup trucks and best appearing car.[1]

Spectators at the show could also vote for a queen of the show. Five finalists were selected before the show, and these were Marna Redmayne, Helen Farkas, Donna Claire, Connie Herbst and Judy Smith. The winner, 18 years old Connie Herbst,[2] was crowned by last years queen Diane Guidry.[1]

Please get in touch with us at mail@kustomrama.com if you have additional information or photos to share about Long Beach Renegades Car Club Renecade 1957.