From Kustomrama
(Redirected from Willie Kendig)
Jump to: navigation, search 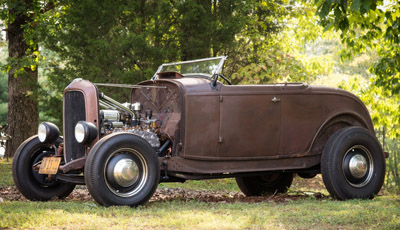 Willie Kendig's 1932 Ford Roadster was built after Willie came out of the service in 1948. 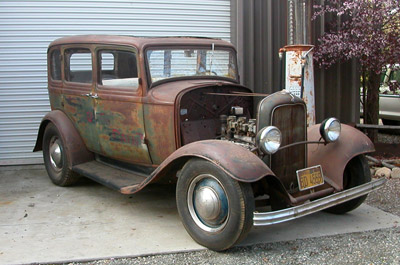 The Boudakian Bros' 1932 Ford four-door sedan. Willie Kendig of Yettem, California bought the sedan from the Boudakian Brothers somewhere around 1960.

Willard "Willie" Zareh Kendig (09.22.1919 - 05.04.2011) of Yettem, California was the owner of Kendig Service Center and Automotive Repair. He was famous for inventing the Kendig carburetor, and lived the majority of his life in the Visalia area. Willie's passion for performance began early on, as he tore across the local roadways on an old Indian motorcycle. He made the switch to competitive jalopy races and, ultimately hydroplane boat races. At a young age, it wasn't just a love for speed that developed, but also an intense curiosity for the mechanics behind high performance.[1]

At age 12 Willie tore down and put back together his first Model T. Willie's dad almost beat him to death, as it was the family's only means of transportation.[1] Wille served in the U.S. Navy during WWII as a flight engineer.[2] After returning from the service in 1948, Willie bought and built a highboy 1932 Ford roadster. At the same time, he did also become a founding member of the Vapor Trailers of Visalia car and motorcycle club.[3] Willie was passionate about his work, and became well as a mechanic and inventor. He owned and operated the Kendig's Service Center and Auto Repair in a number of locations throughout Tulare County most of his life. He invented and patented the Kendig Variable Venturi Carburetor in the early 1970s. The carburetor was successfully campaigned on cars and boats during that decade.

Please get in touch with us at mail@kustomrama.com if you have additional information or photos to share about Willard Zareh Kendig.