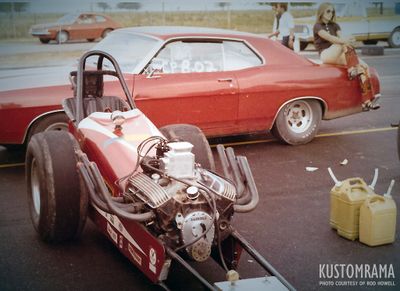 Rod Howell tried out the then experimental Kendig carburetor in 1972 at the National Challenge in Tulsa, Oklahoma; " Kendig was there letting racers try it out since it was very new and not released to the public yet," Howell told Kustomrama in 2016. "My rail was one of the faster ones in its class nationally so we were a perfect fit to do some trial runs comparing it to the Holley. Running an A/Experimental with a 30 over 327 we ran 8.90's at 150 with the carb. We had to switch back to the Holley double pumper during eliminations because of a rough idle. We made it to the semi final round of a 32 car field in Comp Eliminator. "

The Kendig Variable Venturi Carburetor was invented by Willard Zareh Kendig in the early 1970s. The carburetor was successfully campaigned on cars and boats during that decade.

Please get in touch with us at mail@kustomrama.com if you have additional information or photos to share about Kendig Variable Venturi Carburetor.