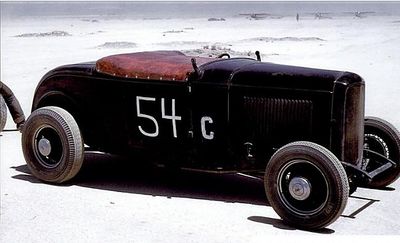 Photo taken on El Mirage April 25, 1948. Notice the three private planes in the distant background that have landed on the lake. 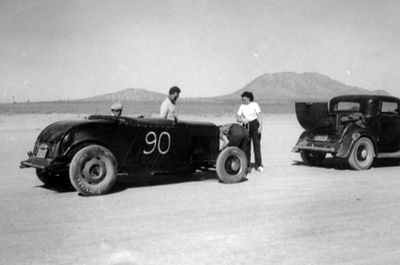 1932 Ford Roadster owned and built by Strokers member Wally O'Brien. Wally filled the grille shell and removed the door handles. The windshield was removed, however the stanchions were kept in place. He added a red vinyl tarp to cover the passenger compartment to reduce drag for the lakes runs. On April 25, 1948, he ran a speed of 125.87 mph at El Mirage.[1]

Little is known about Wally's Rodster, but according to The American Hot Rod Foundation, it was powered by a 266" 1946 Mercury engine by late 1949. In September the same year he ran 137.19 mph for fifth in class. It was also fit with "Milk Truck" rims in the rear with Firestone Indy tires.

Please get in touch with us at mail@kustomrama.com if you have additional information or photos to share about Wally O'Brien's 1932 Ford.