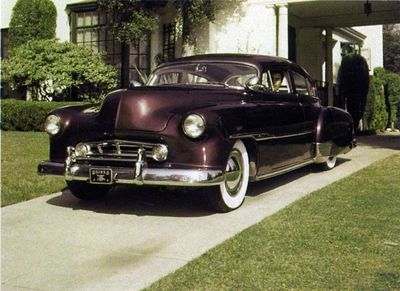 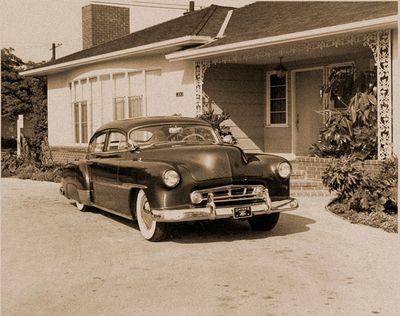 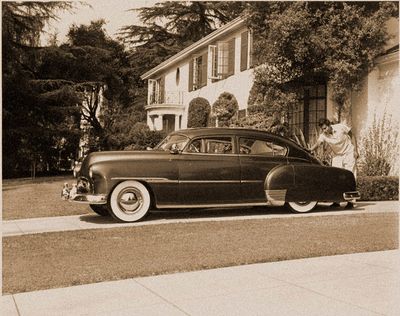 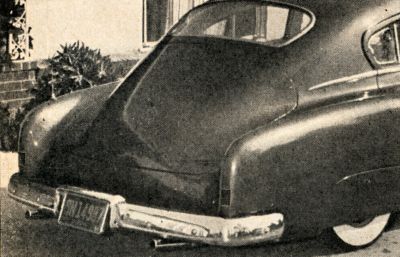 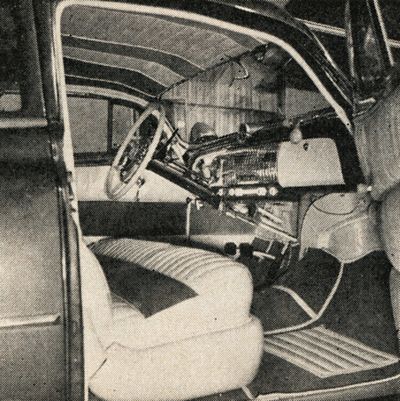 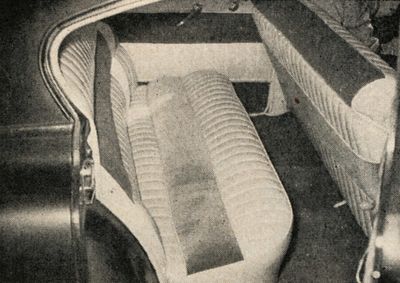 1951 Chevrolet Four Door Fleetline restyled by Kenny's Garage for Shieks member Vince Ulloa of Los Angeles. Vince drove the car around mildly customized for a while before he decided to have the top chopped. Kenny's Garage in Los Angeles handled the chop and spent four months restyling the car. The top was lowered by chopping the windshield and removing V-sections from the body just to the rear of back window in the sail panel. During the chop, the rear seats were rebuilt with more slant and lowered 3 inches. Gaylord's Upholstery Shop took over the car, and came through with a frieze and rolled/pleated Naugahyde interior. The material used was grey and eggshell white.[2] When the car was featured in Trend Book 122 Custom Cars 1956 Annual the front end was restyled featuring a 1951 Mercury grille shell that had been cut down and molded to the front panels of the body. A shortened 1953 Dodge grille had been installed inside the new opening, the hood was shaved and peaked, the hood corners were rounded and the headlights were frenched. The door handles were shaved and dual spotlights, fender skirts and custom hubcaps had been installed. The deck lid was shaved, body seams were molded and the stock taillights were repositioned 4 inches lower and frenched into the fenders. Doors and trunk were push-button operated. The story did not mention if these modifications were done before or during the chop.[3]

Please get in touch with us at mail@kustomrama.com if you have additional information or photos to share about Vince Ulloa's 1951 Chevrolet.