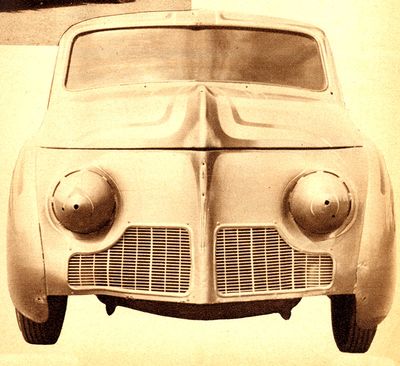 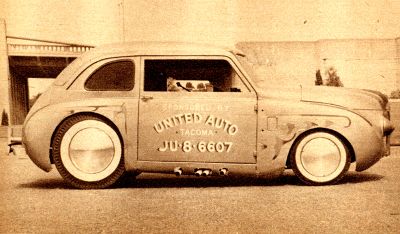 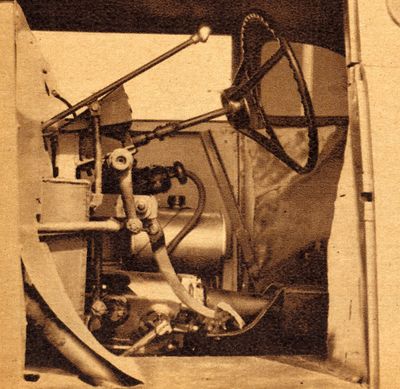 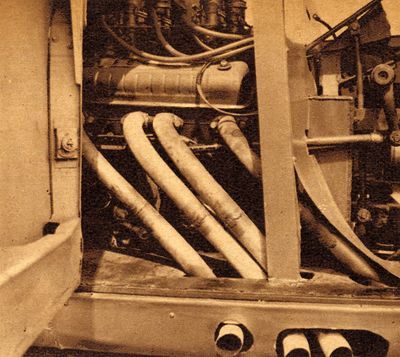 1947 Crosley dragster built by Vern Rogers. The wheel wells were fully cut out, the front wheels were Ford trailer units while the rear were stock Ford 15". The front bumper was removed and push bars were installed in the rear. Four exhaust outlets were cut-out on each sides. The Crosley body was mounted on a tubular frame with 80" wheelbase, a sectioned 1947 Ford front axle, a 1955 Ford rear axle with locked rear end. The ring/pinion ratio was 4.11:1. A warmed over 1955 Ford 292 cui engine were installed between the rails. It ran with an Iskendrian cam, rocker arms and lifters. Fuel was secured by four Stromberg 97 carburetors mounted on a homemade intake manifold. However, the bore and stroke were kept stock. A 1948 Cadillac transmission was used along with a 11" clutch, which had a Ford tailshaft housing welded directly to rear of the transmission. The car used 1955 Ford pickup bell housings for adaptor. The flywheel was kept stock. The headlight housings were installed backwards to reduce wind resistance. Scallops were applied to the gold body, spun Moon discs on wide whites wrapped up the style.[1]

Please get in touch with us at mail@kustomrama.com if you have additional information or photos to share about Vern Rogers' 1947 Crosley.