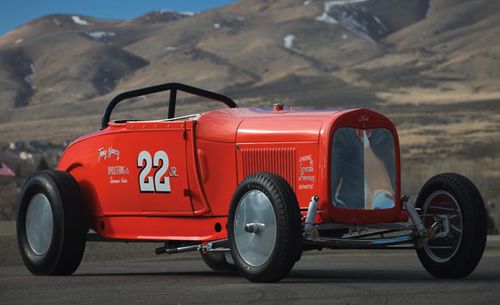 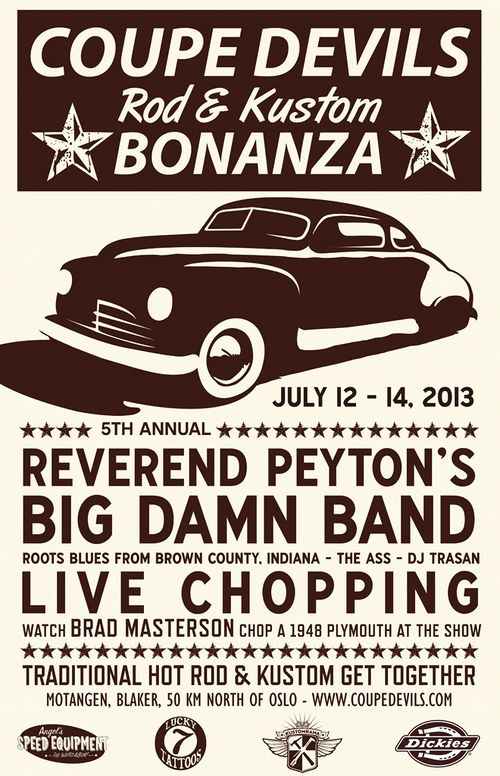 Over the years, Tony Nancy and his always immaculate, always competitive racing cars have appeared on no fewer than five Hot Rod Magazine covers. The first occasion was in December 1957, within a feature called “Flathead, One More Time.” While Ford had stopped building its obsolete flatheads back in 1953, hot rodders were in no rush to replace them with Ford’s first overhead-valve V8 engines. However, the first true challenge to the supremacy of the beloved flathead was in full swing by 1955, with the introduction of Chevrolet’s lightweight, high revving, overhead-valve small-block V8, which soon put most racing flatties on their trailers overnight. Nevertheless, Tony stayed faithful to the flathead, with an ace up his sleeve and a crack engine builder in his corner.

Tom Sparks, a meticulous West Hollywood-based engine expert and tuner, cut his teeth at Eddie Meyer Engineering. Sparks first made hot rodding headlines in 1954 when his colorful, four-car Sparks & Bonney racing team jumped off the cover of Rod & Custom. Tommy knew how to coax every ounce of power out of Ford’s aging “underhead valve” motor and he was certain that the hot setup was not a big-displacement stroker. Instead, he wanted to help Ford’s long-stroke design rev significantly (and reliably) higher and he understood that supercharging was the key to overcoming the flathead’s inherent breathing difficulties. After all, Sparks had already demonstrated the merits of this philosophy with a consistently victorious Willys drag coupe that took home no less than 55 trophies in one season.

That same 256 cubic inch flathead V8 engine, which was de-stroked by 1/8-inch and included a serious 3 3/8-inch bore, was radically set back under the altered firewall, providing Sparks with the solid foundation he needed. A Gilmore belt-driven Italmeccanica supercharger got its urge from every clever, top-of-the line, go-fast upgrade Sparks could devise, including three drilled-out Stromberg 97 carburators, a Harman & Collins magneto, steel main bearing caps, screw-in valve seats, polished ports, improved crankcase ventilation, hand-lapped and precisely balanced rods and pistons, in addition to a center exhaust divider for the siamesed middle cylinders. To save weight, the radiator was omitted from the car.

The Mercury engine block was artfully ported and relieved, while the Edelbrock cylinder heads were massaged as well. Tommy’s goal was to achieve a better and faster flow of the fuel-air mixture, using the hottest fuel he could devise. Reportedly, the high-revving, 7,000-rpm wailer swilled down a full gallon of 70-percent nitromethane fuel mix for each quarter-mile pass. A Moon spun aluminum fuel tank was mounted in the trunk, over the rear axle.

Working out of his renowned Sherman Oaks Upholstery Trim Shop, Tony Nancy massaged a set of Deuce frame rails, drilling them where appropriate for reduced weight. He also fabricated a roll bar under the cowl, as well as a center-braced, full roll hoop at the rear for driver protection. He connected the two bars with stiffening rods that ran through the cockpit, and substituted tubular cross-members for added rigidity. A straight Ford beam-type axle, center-mounted 1937 Plymouth steering, a 1940 Ford steering wheel, handmade hairpin-style wishbones and tubular shocks anchored the brakeless front end. A carefully assembled 1939 Ford gearbox with a 26-tooth Lincoln-Zephyr close-ratio first and second gearset, as well as a locked rear end made up the driveline. Tony hand-fashioned a neat set of flat aluminum wheel discs for the steel wheels to reduce wind resistance, while the car rolled on ribbed front tires, with a set of racing slicks at the rear.

Finished in blazing orange, the absolutely immaculate, center-steered ’29 Model A roadster was the first of what would be a long line of Nancy’s famed 22 Jr. racing cars. The “22 Jr.” racing number was partly derived from the fact that Nancy favored the number “2”. Also, since he was competing with a smaller-displacement engine against competitors with much larger engines, he added the “Jr.” suffix. Despite the somewhat fragile three-speed transmission and Zephyr gear cluster, Tony held the X-Fuel class ET and class-specific top speed records, turning consistent 135-136-mile per hour runs in the high 10-second range.

“Flatheads forever?” asked the Hot Rod Magazine editors. “Some folks are still wondering after Tony’s A/ V8 swamped a big 400-inch Chrysler-powered roadster at recent drags.” Of course, Tony’s secret was careful preparation and that high-winding, Sparks-built, de-stroked flathead, not to mention the fact that he was a fast-leaving hole-shot artist who could unquestionably run with the best of them.

Restored to a meticulously high standard under the watchful eye of Tony Nancy collector Dan LaCroix, the 22 Jr. Flathead-powered roadster is presented today precisely as it was when it successfully competed, with a Tom Sparks-built blown flathead. This first 22 Jr. has also been featured at the NHRA Bakersfield Reunion, as well as many other events. Since the completion of its painstaking restoration, the car has been displayed at both the NHRA Museum and the Petersen Automotive Museum. The owner relates that five racing trophies are included with the sale of the car, as well as a file containing many articles and photographs from its heyday. The car is also featured on the cover of the book Hot Rod Roots, which was published by Motorbooks in 2007, and of which five copies will also be included in the sale.

Significant as one of the first drag racing roadsters to earn substantial National recognition, Tony Nancy’s bright orange beauty set new standards for its class and the sport of hot rodding in general. It remains a significant collector car and a tribute to the inspired duo of Tom Sparks and Tony Nancy.

Please get in touch with us at mail@kustomrama.com if you have additional information or photos to share about Tony Nancy's 1929 Ford.