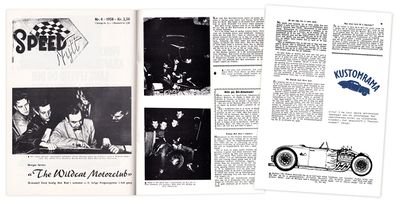 Speed-Nytt 4/1958 ran a story on The Wildcat Motorclub, the first hot rod club of Norway. 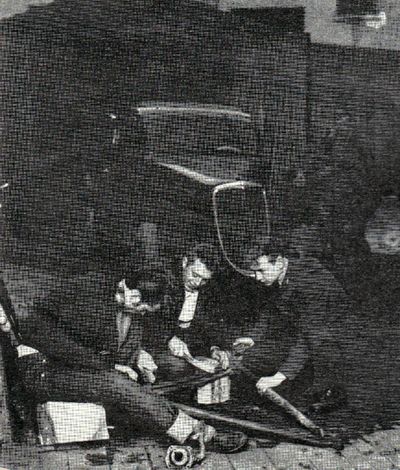 Three members of the Wildcat Motorclub working on the club car in 1958. Tore Tømmerås' 1935 Ford 5-Window Coupe can be seen in the back of the picture. From left, Bjørn Hoel, Terje Buaas and Erik Eriksen. Photo from Speed-Nytt 4/1958. 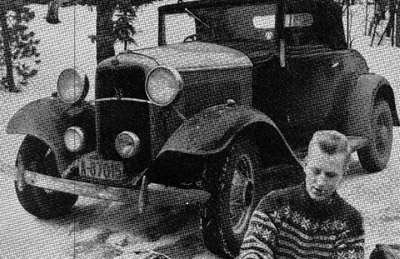 Per Røed's 1932 Ford Cabriolet as it appeared in 1958. Per's cabriolet is considered one of the first hot rods of Norway. 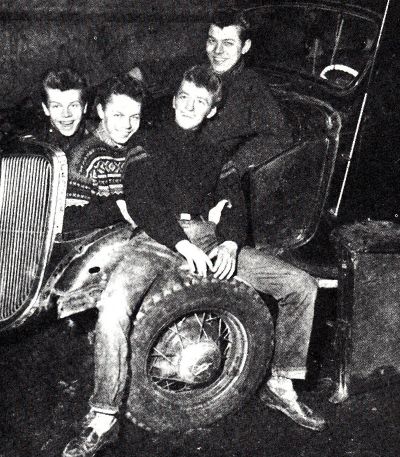 The design for the club car the Wildcats wanted to build. This drawing was published in Speed-Nytt 4/1958. 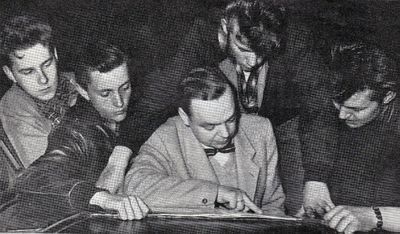 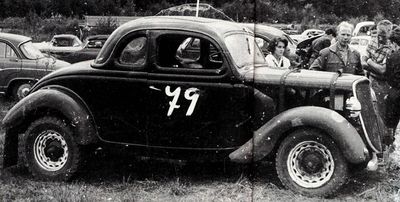 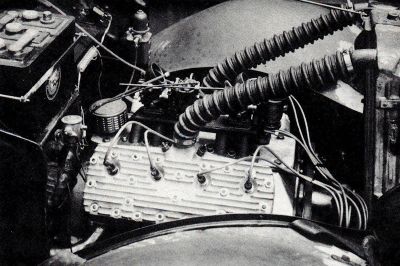 Tore's coupe was powered by a hopped up flathead V8 featuring Edelbrock heads and dual carburetors.

The Wildcat Motorclub was a hot rod club from Oslo, Norway. Founded in 1958, the club is known as the first hot rod club of Norway. The club consisted of teenagers from Frogner, and Tore Tømmerås was the first president of the club. Tore founded the club with two friends. It all started with an old Model-T Ford that they put together with limited funds and tools. As the club grew larger, the boys became aware of the hot rod culture through american magazines, and they started to disassemble the car again in order to convert it into a real hot rod. The club met every thursday on a courtyard in Frogner to work on the Model T. In addition to the Model T, Tore Tømmerås owned a 1935 Ford 5-Window Coupe. In 1958 the Norwegian magazine Speed-Nytt did a featured story on the newly established club. By then the club consisted of 11 members. At the time, the guys were busy removing rust from the old Model T. They had spent the winter constructing and designing the car on paper before the actual work began. One of the drawings were published in Speed-Nytt 4/1958, and it shows that the boys wanted to build a flamed and fenderless 1931 Ford Model A roadster on a Model T frame. The Wildcat roadster featured wire-wheels and Firestone whitewall tires, 1935 Ford axles, hydraulic brakes and a 1946 - 1948 Mercury V8 engine that were fed through three carburetors. Other notable features included a cut-down 1932 Ford grille and exhaust that rand underneath the body. The height was about 1,05 meters, the length approximately 3,35 meters and the weight was about 900 kilograms. Each member had to pay a member fee of 2 Norwegian kroners in order to join the club. A weekly fee of 50 Norwegian øre secured funds to buy tools and parts for the club car.[1]

In addition to hot rods, the guys in the club did also work on motorcycles and mopeds. According to the article printed in Speed-Nytt 4/1958, non of the boys in the club had a profession working on cars, but one had just started his education when the article was written. At the end of the article, the publishers encouraged more Norwegian teenagers to build their own hot rods and form their own hot rod clubs. They were even willing to guide kids through the builds and forming of the clubs.[1]

September 2, 1958 board members from The Wildcat Motorclub and Oslo Hot Rod Klubb held a meeting together discussing a cooperation and the forming of different drag racing classes. They knew they were pioneers in the field, being members of the first hot rod clubs in Norway. Together they decided that the different classes should be formed based on:


a. The weight of the cars, minus ballast, gas and the driver.
b. Height from the ground to the highest point of the car, minus antennas, flag-poles and so on.
c. The number of cylinders: 4-6-8. Straight or V-shaped engines competing in the same classes. An additional class was formed for engines with more than 8 cylinders.


The dragstrip was also specified during the meeting. And the members agreed about having a relatively short dragstrip compared to the shutdown area. By having a long shutdown area, the racers could have as fast as speed as possible when you crossed the finish-line. Good acceleration was therefore important if you wanted to win. The long shutdown area was necessary due to the high speed. A short shutdown area could result in damaged parts on the old cars due to hard braking. Two cars could race head on. The length of the dragstrip was set to be about 405 meters. Unfortunately the drag racing dreams never came through for the young boys. Eager for speed, ice and dirt-track racing became their only alternative.[2]

Both The Wildcat Motorclub and Oslo Hot Rod Klubb were short-lived clubs. As the members grew an interest in girls, it became hard to maintain the weekly club nights, and both clubs faded out. The boys kept their cars and used them regularly, but by the early 1960s both clubs were history.[2]

Please get in touch with us at mail@kustomrama.com if you have additional information or photos to share about The Wildcat Motorclub.