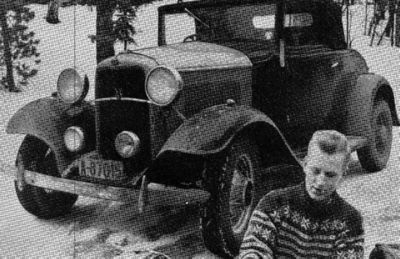 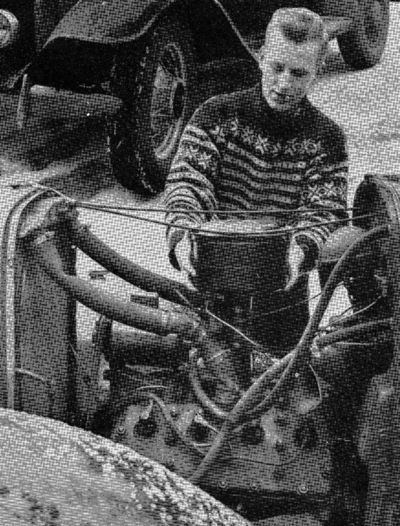 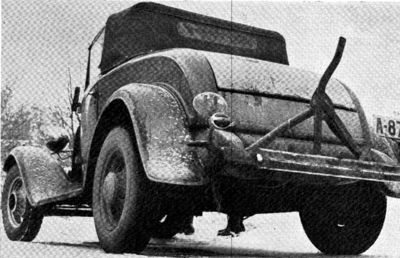 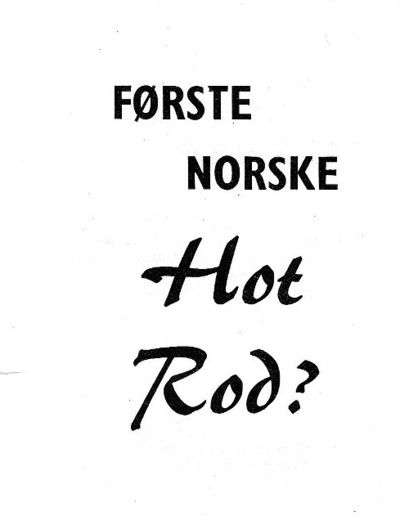 Speed-Nytt questioned if this could be the first hot rod of Norway. 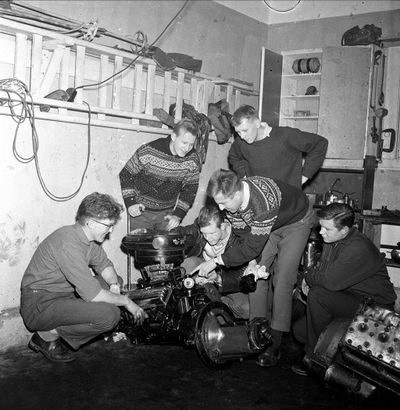 A photo supposedly taken in Per's garage. Dated 12.16.1959, the photo comes from Dagbladet and Norsk Folkemuseum's collection. The photo is listed with the following subject at Digitalt Museum: "Racing Car Club. Reidar Hellgren nærmest 16.12.1959." Per's old Flathead engine can be seen in the right lower corner of the photo. Drooling over the Oldsmobile engine he is about to install in his cabriolet is Fosmo, Per, Reidar Hellgren and Per Knutsen. Notice the ribbed aluminum valve covers.[1] Could this be the members of the Speed Cars Club of Oslo. Photo courtesy of Dagbladet / Norsk Folkemuseum, from Digitalt Museum.

1932 Ford Cabriolet owned by Per Røed of Oslo, Norway. Per was a member of The Wildcat Motorclub[2]. He lived at Smestad, was a mechanic, and his hopped-up cabriolet was featured in Speed-Nytt 3/1958. Per was 22 years old at the time and in the middle of transforming the old Ford into a hot rod. He bought the car a couple of years earlier, around 1956, as he was looking for an affordable car he could use for daily transportation. He had to pay 3,700 Norwegian kroner to get it. The price was a little high, but as the car had been fitted with a newer 85 horsepower 1939 Ford V-8 engine it was worth the price. When Speed-Nytt paid Per a visit he had hopped the engine up by shaving the heads 1,3 mm. A modification that according to Per had increased the number of horsepowers to 100. The body was still stock looking when the story was made, but Per told the reporter that he wanted to start to restyle the car after the easter. He wanted to dress the engine up by chroming the heads and install a dual-carburetor intake. Locating the intake would not be easy, but he knew a place he could chrome plate the heads for 30 Norwegian kroner each. Other plans included removing the fenders, replace all rusted panels and repaint the car.[3]

Later on Speed-Nytt 4/1958 reported that the engine had blown up after the featured story had been made. Per had probably pushed the old engine a little hard, and one of the rods came loose and crushed several vital parts. When the next number of Speed-Nytt hit the stands, Per was already hunting a new engine for the car.[4]

Per got the old Ford back on the road again, and it was frequently raced at different dirt and ice track races. In 1959 he decided to install a bigger and more powerful Oldsmobile 88 engine in the car. The engine swap was not approved by the vehicle licensing department, and Per was not allowed to use the car on public roads anymore after the swap. This pissed Per off, and he avenged himself on the vehicle licensing department by burying the car at the Grønmo dump in Oslo.[5]

Please get in touch with us at mail@kustomrama.com if you have additional information or photos to share about Per Røed's 1932 Ford.