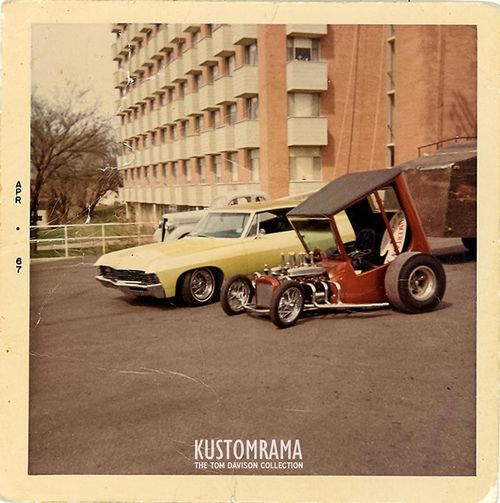 In the mid 1960s Tom worked with customizer and show promoter Ray Farhner. Tom saw “The Uncertain-T” show rod at its first show in Los Angeles. He told Ray about the wicked car, and Ray ended up leasing it for a year as a feature for his shows. Tom picked up the car and trailer at Steve’s house and towed it to Kansas City. This photos was taken as they unloaded it for Ray to see for the first time. Tom’s tow car was his brand new 1967 Impala mild custom. Photo courtesy of Tom Davison.

Tom Davison of Raytown, Missouri. As a teenager, Tom and his friends Jerry and Cornell used to drive out to Ray Farhner's shop in the hope of seeing some of his famous cars trough the doorway and perhaps be able to show him the custom model cars they had built. Within the space of a week or two, in exchange for sweeping his floor and fetching him coffee, Ray allowed the teens the run of the shop every Saturday. This included the use of his sprayguns and his supply of expensive and exotic paints to use for their models. Tom quickly graduated to painting many of his showcars, such as Ray Farhner's 1963 Chevrolet Corvette, named Outer Limits. Ray liked the car shirts Tom was drawing at home using magic markers, so he gave him an old airbrush to use for that purpose. Tom used it to start selling his shirts at Ray's first show in Kansas City in 1961, and in every one of the hundreds of shows he subsequently promoted. Since then Tom continued his career, and he never had to work for anyone else.[1]

Please get in touch with us at mail@kustomrama.com if you have additional information or photos to share about The Tom Davison Photo Collection.