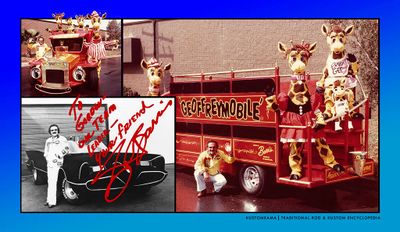 A photo of the Geoffreymobile from Gordon Summer's office wall. The photo is signed by George Barris. Photo courtesy of Gordon Summer. 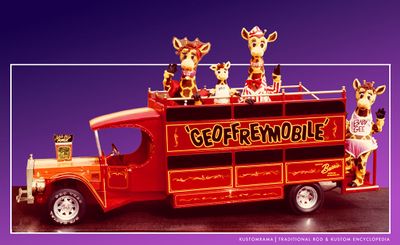 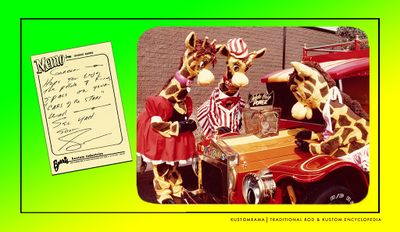 The Geoffreymobile was a promotion vehicle that Barris Kustoms built for Toys 'R' Us. The design of the truck was a group effort by Gordon Summer CMO of Toys 'R' Us, George Barris, and Dick Dean.[1]

Gordon Summer was the first Chief Marketing Officer of Toys 'R' Us. In April of 2021, he told Sondre Kvipt of Kustomrama that they had a giraffe family as their mascots. "There was Geoffrey, his wife Gigi, Baby Gee, and Junior. They were featured in our advertising on TV and in newspapers. They made personal appearances at store openings and at special events, like the White House Easter Egg Hunt. But how could they travel from one location to another? Answer: a London Double Decker style hotrod bus with the second floor removed in order to fit the giraffes. I hired the infamous George Barris (of Batmobile fame) to build it for us. We debuted it at the New York Auto Show in 1981, right at the top of the escalator in the Coliseum with George, himself, greeting guests and signing autographs."[1]

Please get in touch with us at mail@kustomrama.com if you have additional information or photos to share about The Geoffreymobile.