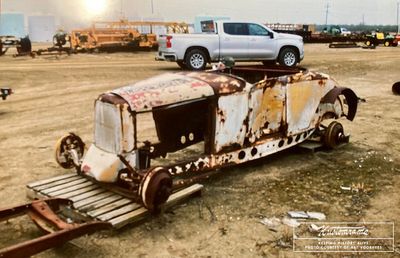 The old roadster as it sat in 2021 when March went to check it out. Photo courtesy of Art Voorhees. 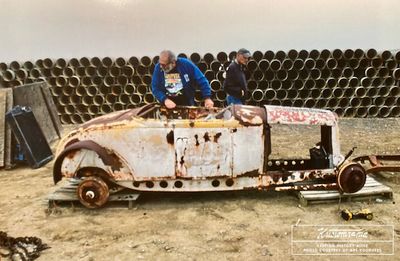 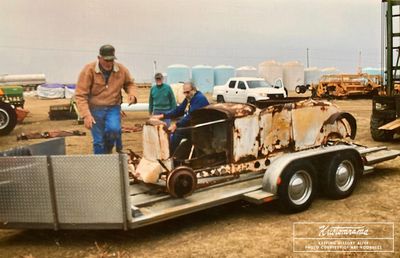 1930 or 1931 Ford Model A Roadster owned by Bob Wood of Dos Palos, California. The old drag roadster was unearthed in 20201 after Bob had passed away. According to Richard Noble, Bob used to campaign a GMC-powered rail back in the day, and the roadster was also raced with a GMC engine. After Bob passed away, his son got in touch with Marsh Runyon. The son told Marsh that his dad had owned the car since 1938 and that he had loaned it to a friend that wanted to drag race it with a hot flathead. "The friend did this and sat the engine back under the firewall, he drilled holes in the frame to lighten the car. When he returned it to Bob with the holes in it Bob was pissed and stored the car away."[1]

In September of 2022, the roadster was owned by John Taylor. John is restoring the car to run at the Eagle Field Drag Strip. He is installing a GMC six-cylinder engine in the car, running a LaSalle-transmission and a 371 GMC blower. Marsh Runyon is going to help set up the motor for John.

Do You Recognize the Bob Wood Roadster?

Much of the history of the roadster was lost when Bob passed away. Do you recognize it? It has a 1930 - 1931 Ford body on a 1932 Ford frame with drilled holes and an early dropped front axle. Please get in touch with Kustomrama at mail@kustomrama.com if you recognize the car or have any info to share about it.

Please get in touch with us at mail@kustomrama.com if you have additional information or photos to share about The Bob Wood Roadster.