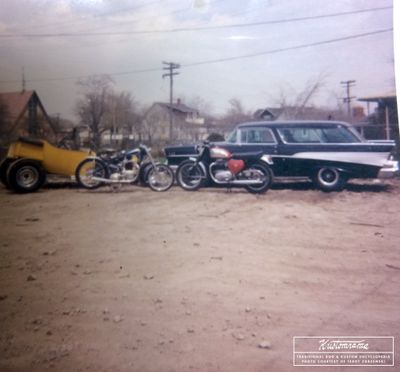 A photo of the Nomad next to Teddy's T-Bucket and motorcycles. He bought the BSA brand new in 1964. Photo courtesy of Teddy Zgrzemski. 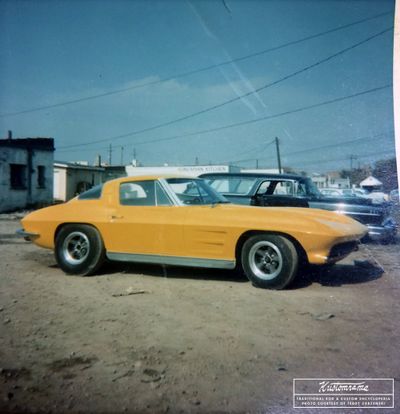 A photo that shows how low the Nomad was with the hydraulic lifts down. Teddy had just painted Dick Bailey's 1963 Chevrolet Corvette when this photo was taken in 1965. Photo courtesy of Teddy Zgrzemski.

1957 Chevrolet Nomad owned by Teddy Zgrzemski of Rockwood, Michigan. In 2019 Teddy told Sondre Kvipt of Kustomrama that he bought the Nomad from a friend named Gene Rosco. "He lived over in California, and he brought it back here in 1964 or 65. It was black with a V8, an automatic, and a beautiful all black tuck and roll interior by Eddie Martinez. Teddy asked Gene if he would be interested in selling the car. Gene told him sure, he would be interested in selling it, and then he and his wife could just fly back to California. "So, I bought it for 1,200 dollars.""[1]

Teddy put a set of E-T Classic V 5-spoke wheels on the Nomad and started driving it as his daily driver. "My uncle came back a few months after that, and I told him I would like to put hydraulics on it." Back then, nobody was doing hydraulics in Michigan, but Teddy's uncle, Bill Hines, did a lot of them over in California. "He pre-made the shock brackets while he was out in California and brought them back to Michigan for a vacation," Teddy recalled. "He would never fly. Never got on an airplane." Teddy didn't have an ARC welder, or nothing like that back then, so they got it all set up before they took the car to the shop next door, Wyandotte Frame and Axle, who had an ARC welder they could borrow to weld the brackets for the shock absorbers and all that stuff. It was just the front that was lifted. "I would not do the back. Just the front, because I always liked the California rake you know, when they put it down low in the front."[1]

Daily driver. No problems. Ever.

Teddy is pretty sure that his Nomad was the first lifted car in Michigan. "Cruising the drive-ins was great," he recalled. "Go through with the front bumper 2 inches off the ground. 10 minutes later. 12 inches." Teddy drove the Nomad every day of the year for two or three years. "Summer. Fall. Winter. Spring. I had a ski-boat that I used to tow up North to my mom's place, which is about 195 miles away, and I never ever had one problem with those hydraulics. They didn't leak, and I never had to add fluid or nothing. I could not believe it, but they worked great."[1]

Sold back to Rosco

"It was just a car back then," Teddy told Sondre in 2019. "Now I would give anything to have it back." Teddy ended up selling the Nomad back to Gene Rosco. "His wife always bitched at him because she liked that car so much, so when Rosco came back from California on a visit, I sold it for 800. Dumb ass me you know!" Rosco had a friend take out the hydraulics before he drove it back to California. Rosco and his wife lived on a hill and Teddy believe his wife had taken the car out grocery shopping one day when she came back and parked it. "She backed the car up, and she didn't have it all the way in park, so it rolled down the hill and smashed the front end." Rosco was a pretty smart guy, so he found a used front end that he put on before he gave it a silver paint job. "I'm not sure, but I think he said his wife wanted it silver, so he painted it silver."[1]

Please get in touch with us at mail@kustomrama.com if you have additional information or photos to share about Teddy Zgrzemski' 1957 Chevrolet Nomad.