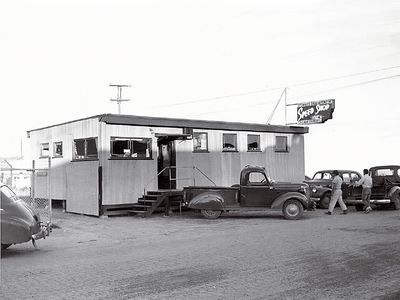 Stewart Speed Automotive after Ed and Bob moved the family business from Suncrest to San Diego.

Stewart Speed Automotive was a speed shop run by Ed "Axle" Stewart of San Diego, California. Ed was a machinist and heat-treat specialist by trade, but ended up devoting his life to hot rods. In the 1940s Ed started Stewart Speed Automotive in his garage in Suncrest, about 30 miles from San Diego. Ed collaborated with Abe Kobeck at Rogers Auto Carriage to learn how to make 1932 Ford dropped axles by the drop hammer method, which made them tougher than taffy-pulled axles. The modified axle lowered the stance of the desert racers for less wind resistance and faster times and became a signature hot rod part known as the Dago Axle after the locale of San Diego.[1]

In the early 1950s, Ed moved the speed shop to San Diego. Ed's son, Bob Stewart became expert at boring, honing, port-and-polish work, and made deliveries of the Dago Axle and other speed parts to Los Angeles. Bob's customers nicknamed him Li’l Axle after his well-known father.[1]

Please get in touch with us at mail@kustomrama.com if you have additional information or photos to share about Stewart Speed Automotive.