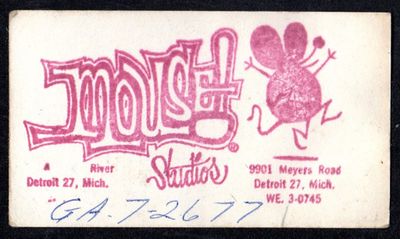 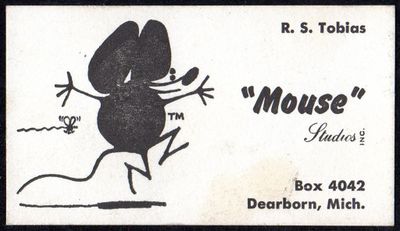 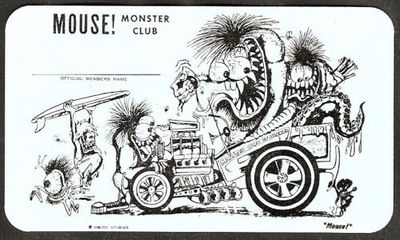 Stanley "Mouse" Krazinski is an air brush artist from Detroit, Michigan. Mouse started out as an air brush artist painting sweatshirts live at hot rod and custom car shows, notable the Detroit Autorama. The Detroit Autorama was a three-day show, attracting thousands of spectators, and Mouse could draw his mouse character doing anything. According to Lansing pinstriper Jerry "Spider the Crazy Painter" Drake, his most famous one, asked to be done over and over again, was the mouse in a toilet with his hand on the handle ready to flush it and the words "Goodbye Cruel World" above the drawing. Jerry first met Mouse in the late 1950s; "He was airbrushing sweatshirts at the Lansing Autorama and I invited him over to our house which was in downtown Lansing, only a few block from the Lansing Civic Center. At that time, I found out that Mouse's real name was Stanley Krazinski. Mouse asked me not to tell anyone what his real name was, but I always called him Stanley after that. Mouse was airbrushing sweatshirts at the time and there must have been at least 100 people either watching him paint or waiting to have a sweatshirt painted. At the back of the crowd I cupped my hands and in an eeirey voice hollored "Stanley." After no response, I hollored his name once again. Mouse quit painting, turned around and said, "Spider, I know that is you. Where are you?" I raised my hand at the back of the crowd. There was an older man, I would guess in his late 60s, that I was standing beside, and he turned to me and said, "Evidently you know Mouse quite well?" I told him I did, and also commented, "He's really good isn't he?" The man replied back, "He better be! He's my son! I'm a retired Walt Disney illustrator and I taught him the Art of Animation!" I was dumbfounded! From his dad Mouse could take his character and have it do anything a customer wanted. What a gift!"[1]

Mouse eventually moved to Los Angeles, where he was painting the album covers for the heavy metal group Journey.[1]

Please get in touch with us at mail@kustomrama.com if you have additional information or photos to share about Stanley Mouse.